Hens open second half with loss to Scranton 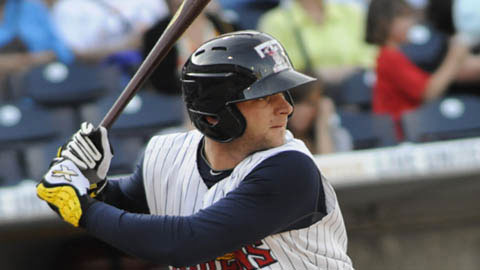 (Scranton, PA) - The Toledo Mud Hens returned from the All-Star break with a 12-5 loss at the hands of the Scranton/Wilkes-Barre Yankees on Thursday night at PNC Field.

The scored first on a Will Rhymes home run in the top of the first inning against Scranton/Wilkes-Barre starter Sergio Mitre.

The Yankees responded in the bottom of the inning with an eight-run, two-out rally. After Billy Buckner (3-5) retired Reid Gorecki and Chad Tracy, two singles and a walk loaded the bases for Jorge Vazquez, who doubled to drive in two. Reegie Corona doubled to score two more, and Eric Bruntlett singled to make it a 5-1 game. A Greg Golson single and a walk to Gorecki re-loaded the bases before Tracy brought an end to Buckner's night with a bases-clearing double. Eduardo Nuñez greeted Gilbert De La Vara with a double to drive in Scranton/Wilkes-Barre's ninth run of the inning. All in all, the Yanks sent 13 men to the plate in the frame.

In the third, Rhymes doubled to plate Max St-Pierre and Scott Sizemore.

Scranton/Wilkes-Barre added a run in the bottom of the fourth on a sacrifice fly by Jorge Vazquez.

Jeff Larish's 15th home run of the season cut the Mud Hen deficit to 10-4 in the top of the sixth, but the Yankees came back with a run in the bottom of the inning on a Nuñez double and a Jesus Montero single.

The Mud Hens continued to chip away in the top of the seventh. After Wilkin Ramirez struck out, Casper Wells drew a walk, St-Pierre singled, and Sizemore singled to bring home Wells.

Montero's solo homer in the bottom of the eighth capped the scoring at 12-5.

The Hens continue their series with the Yankees on Friday. They return to Toledo to host the Buffalo Bisons on Friday, July 23 at 7:00 p.m. Click for Upcoming Game Tickets | Box Score