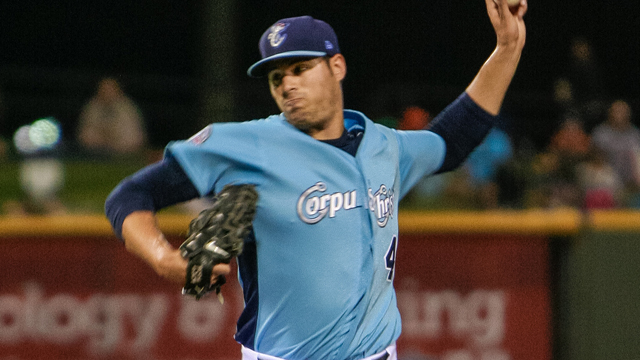 When Thomas Shirley is on the mound with a runner in scoring position, he tightens up and reaches a new level of intensity. On Wednesday, he pitched so dominantly that he only needed to tap that intensity just once.

The 25-year-old left-hander cruised through six shutout innings, allowing one hit while striking out five, in Double-A Corpus Christi's 7-2 victory over Arkansas at Dickey-Stephens Park.

"I feel pretty good and obviously, everything was working with the one hit," Shirley said. "I'm kind of a big fastball pitcher, I had that going on both sides of the plate, [and] I used the changeup and curveball, too."

Aside from hitting a batter in the second and giving up a one-out double to Angels No. 11 prospect Zach Borenstein in the fourth, Shirley (5-2) was perfect. He threw 65 of 93 pitches for strikes.

"It felt like I was in a groove the whole time, even before the one-out double," the 2010 ninth-round Draft pick said. "I felt like after I got out of that jam, I think we scored again, I was just trying to throw strikes, attack the zone."

Shirley has worked with pitching coach Gary Ruby to polish off his fastball command, and the results have been impressive. The Xavier University product ranks second in the Texas League with a 1.51 ERA and 51 strikeouts over 47 2/3 innings.

While command is his main focus, Shirley already has plunked a career-high four batters in 10 appearances, including seven starts.

"I don't think I had any last season," he said. "It's just one of those things going into, some guys are on top of the plate, they move in and don't get caught. You go inside and sometimes you can get away with it for a strike."

Shirley turned the ball over to Alex Sogard, who gave up a homer to Borenstein, the first batter he faced. Andrew Robinson worked around two hits and struck out two in the ninth as the Hooks won for the fifth time in seven games.

Rene Garcia slugged his third homer and Preston Tucker went 3-for-5 with a longball and two RBIs for Corpus Christi. The blast was Tucker's fourth in five games and team-leading 10th of the season.

"He's got unbelievable power, real strong," Shirley said of Tucker. "At [Whataburger Field], it's really tough to hit ball out of right field, but he finds a way to do it."