Miami's No. 7 prospect strikes out career-high 11, walks one 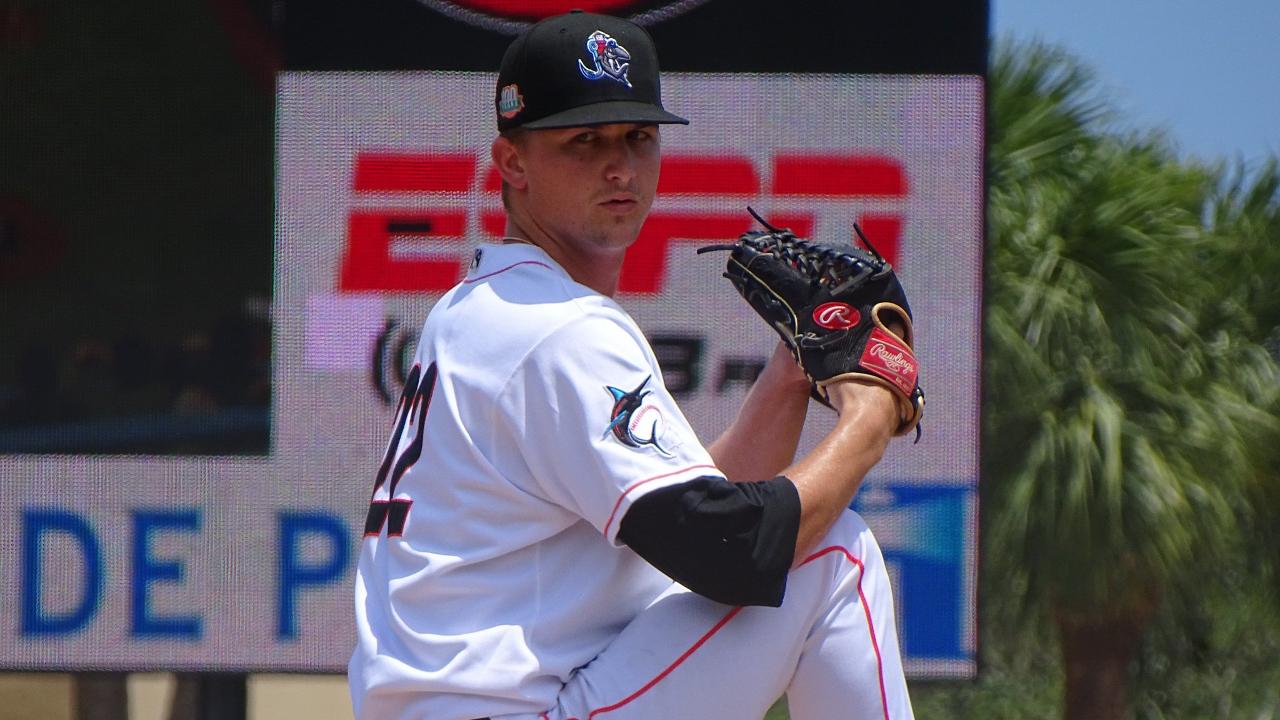 After missing nearly two years following Tommy John surgery, Braxton Garrett had been making up for lost time in the first half of the season. On Tuesday, he took it to another level.

Miami's seventh-ranked prospect tossed seven hitless innings in Class A Advanced Jupiter's 3-0 win over Bradenton at Roger Dean Chevrolet Stadium. He struck out a career-high 11 and surrendered just one walk.

The recipe for success for Garrett (3-3) was his ability to utilize all three of his signature pitches -- something he hasn't been able to do in a long time.

The southpaw came out on fire, fanning seven of the first eight batters he faced. He didn't allow anyone to get on base until the fourth inning, when Pirates No. 14 prospect Lolo Sanchez drew a walk and stole second base before being left stranded.

The only other Bradenton batter to reach got aboard in the seventh. Dylan Busby reached on a fielding error by James Nelson at third base, but Miami's 20th-ranked prospect redeemed himself as Garrett got Lucas Tancas to ground out to him to end the inning and his outing.

Garrett could tell early on he was rolling, but he wasn't concerned about keeping the no-hit bid alive. He was more focused on simply keeping the Hammerheads in the game.

"For a while there, it was a 0-0 ballgame," he said. "So the whole mind-set is going out there and getting outs and keep putting up zeros no matter if you give up a hit or strike out three. As long as you're back in the dugout with a zero on the board, you did your job."

Miami drafted the 21-year-old with the No. 7 overall pick in the 2016 Draft, and soon after, he was named the club's top prospect. He posted a 2.93 ERA over four starts as a rookie with Class A Greensboro before suffering the injury that required elbow surgery and shelved him for more than 20 months.

Now a little more than halfway into his bounceback campaign, Garrett has made 12 starts and his elbow is feeling fine. More than anything, though, he's just happy to be back on the mound.

"Physically, I feel great," he said. "As long as I'm out there for every start, I'm really happy. Because I spent too much time in rehab for my liking."

On a grander scale, the goal for Garrett is to stay healthy and keep trotting to the mound when it's his return in the rotation.

"I want to be successful every start that I go out, just as a competitor," he said. "But the goal is this year to make every start, because I haven't been healthy and now I am, so I just want to be out there every fifth, sixth day, whatever it is."

Marlins No. 16 prospect Tristan Pompey went 4-for-5 with a double for Jupiter. No. 26 Bryson Brigman finished 2-for-4 and scored twice. Micah Brown went 3-for-4 and hit his second homer of the season.

sdJordan Wolf is a contributor to MiLB.com. Follow him on Twitter @byjordanwolf. This story was not subject to the approval of the National Association of Professional Baseball Leagues or its clubs.