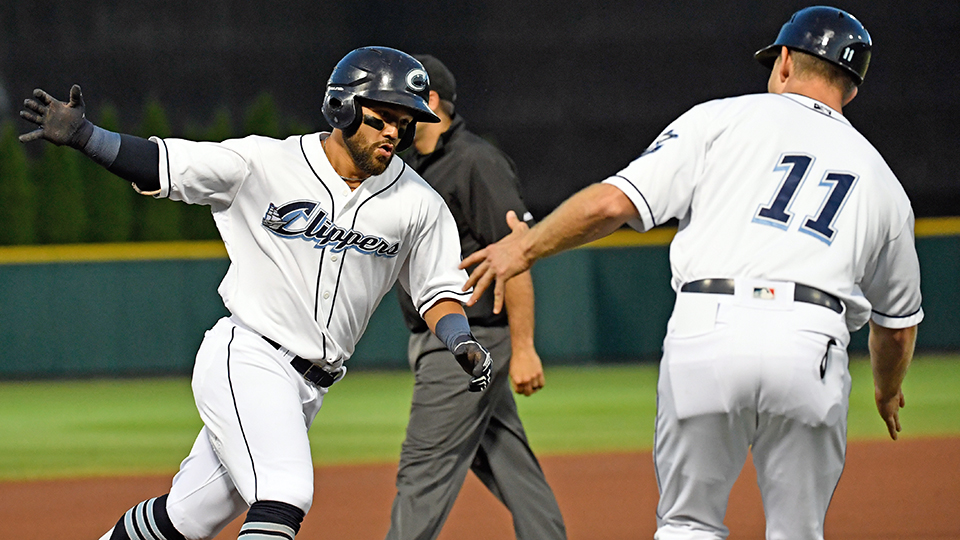 Ka'ai Tom looks back to his up-and-down April as a turning point this year. It got him to focus on the mechanical portions of his swing in May, and he's reaping the benefits of those adjustments in the Governors' Cup Finals.

The Cleveland outfield prospect blasted his second playoff homer -- a three-run shot -- to power Triple-A Columbus to an 8-3 victory over Durham in Game 1 of the best-of-5 series Tuesday at Huntington Park.

"It started in Double-A in May," Tom said of his improvements at the plate. "I was communicating with my hitting coach at the time -- Justin Toole. I didn't have a really good April and I communicated with him. He didn't barge me to 'you need to do this,' he was just kind of listening. I just felt like I needed to get to a certain spot on my front side a little better because I get stuck on my back side. ... Since May, it's kinda been working for me."

On the final day of the regular season, Tom smashed two dingers and recorded four RBIs. He continued swinging a hot bat in the International League semifinals against Gwinnett, totaling eight hits and compiling a 1.222 OPS in four games. The 25-year-old Hawaii native was at his best in the series clincher, when he finished a triple shy of the cycle.

In the Finals opener, Tom led off the bottom of the first inning with a walk and came around to score when seventh-ranked Indians prospect Bobby Bradley smashed a three-run homer, his second of the postseason.

In the fourth, Tom extended the Clippers' lead with a three-run homer to left-center off Rays No. 26 prospect Jose De Leon (0-1), who exited after Andrew Velazquez capped a back-to-back sequence with a solo shot.

"It's definitely great to be able to hit to all fields because you don't have to worry about too much of a shift," Tom said. "You definitely don't want to be a shift guy. Being able to hit to all fields is great, the pitching staffs aren't too sure where to pitch me. If you throw outside, I'll be ready for it. If you throw inside, I'll be ready for it. It's a good feeling to be ultimately ready to hit all the pitches and keeping my momentum and rhythm going middle-middle."

The 2015 fifth-rounder reached for the third time in the sixth when he was hit by a pitch by Ryan Merritt.

"It feels great, just ultimately being able to contribute, being part of the team and taking it one pitch at a time," Tom said. "It's just having fun with the guys. Like this is the postseason -- the Governors' Cup -- so we're just keeping it light. On the field, it's just great to just contribute and win with the ball team."