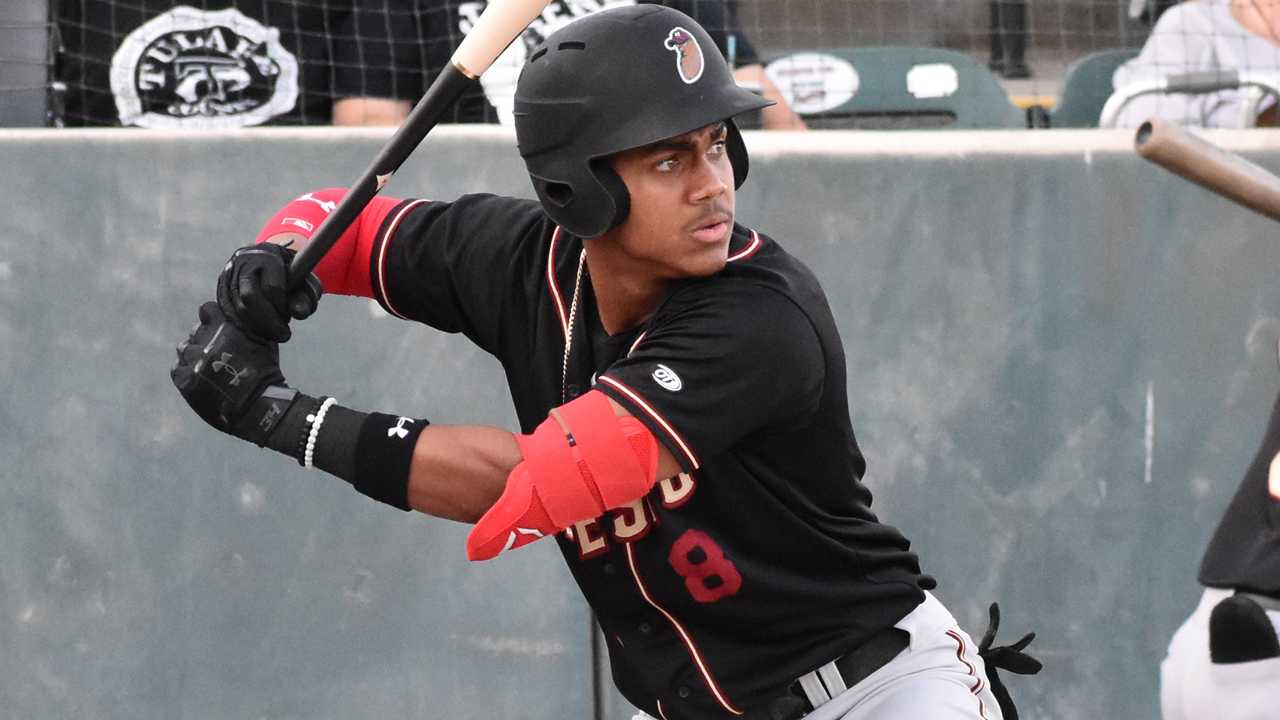 After a scorching start to the 2019 season at the big league level, the Mariners faded. As of April 26, Seattle was 18-11, the best record in baseball, with a 1 1/2-game lead over eventual American League-champion Houston atop the Western Division. From there, things spiraled. The M's finished 68-94, last in the division and 39 games back of the Astros.

Help is on the way.

Seattle's much-debated rebuild bore immense prospect fruit in 2019 with virtually all the organization's top talent posting career years. From the offseason trade that netted the Mariners a budding star in Jarred Kelenic to the breakout year of fellow outfielder Julio Rodriguez to the continued development of first baseman Evan White and a dominant debut campaign for pitcher Logan Gilbert, Seattle's cupboard is full of intriguing pieces that hope -- very vocally -- to lead the franchise to its first-ever World Series.

Catcher -- Cal Raleigh, Modesto (82 games), Arkansas (39 games): In his first full season since being drafted out of Florida State, Raleigh took to pro ball in impressive fashion. The backstop pushed his way out of Class A Advanced after batting .261/.336/.535 with 22 homers in 82 games for Modesto and held his own with a .709 OPS in his first taste of Double-A over 39 contests with Arkansas. Between the two levels, Raleigh posted a .985 fielding percentage in 81 games behind the plate and threw out nearly 30 percent of attempted basestealers (34 caught stealing in 81 tries).

First baseman -- Evan White, Arkansas (92 games): When the M's took White in the first round of the 2017 Draft out of the University of Kentucky, there were no questions about his elite glove and defensive acumen. Three seasons later, he's proving his bat is nothing to worry about -- when he's healthy and in the lineup.

"I think we made some real progress with Evan coming out of our high-performance camp last fall in terms of understanding his body," Mariners director of player development Andy McKay said. "We had the injury issues the first two years, and we still dealt with some this year, but we were certainly on a good trajectory that way. Him being able to be on the field fairly consistently was one of our real goals for him."

White spent the entire season at Double-A and posted an impressive .293/.350/.488 slash line with 18 homers -- seven more than he hit over 28 more games a season prior -- for Arkansas. His sure-handedness in the field continued with a .993 fielding percentage and five errors in 88 games.

The reward was a six-year, $24 million contract at the end of November.

Second baseman -- Tim Lopes, Tacoma (95 games), Seattle (41 games): While playing 63 games at second base and 21 at shortstop, Lopes made enough of an impression on the Mariners to warrant his big league debut in July. Signed as a Minor League free agent in January, it was a homecoming for the 25-year-old, who was drafted by Seattle in 2012 but traded to Toronto in 2016. He put up the best offensive season of his career with a .302/.362/.476 slash line and 10 homers in 95 contests, the first time in his career Lopes reached double digits in that category. In the Majors, he continued to put bat to ball with a .270/.359/.360 line.

Third baseman -- Austin Shenton, Everett (21 games), West Virginia (32 games): From the back end of the M's Top 30 prospects, Shenton jumped into pro ball with a flourish. The Florida International product went to Seattle in the fifth round in June and batted .367/.446/.595 in 21 games with Everett to graduate from short-season ball. After climbing to West Virginia, he homered five times while batting .252/.328/.454 in the South Atlantic League. He also showcased defensive versatility with time at second base and in the outfield.

Shortstop -- Donnie Walton, Arkansas (124 games), Seattle (seven games): Walton returned to the Texas League after playing 62 games with the Travelers in 2018, but this time with an improved bat. The left-handed hitter batted a career-best .300/.390/.427 while doubling his previous high with 11 homers. Walton really found his groove in June when he notchd a .965 OPS in 27 games. On Sept. 10, the M's brought up the Oklahoma State product for his big league debut. Walton went 3-for-16 (.188) with two RBIs and three walks in his first taste of The Show.

Jarred Kelenic, West Virginia (50 games), Modesto (46 games), Arkansas (21 games): Acquired from the Mets on Dec. 3, 2018, just seven months after he was the sixth overall pick in the Draft, Kelenic quickly became the crown jewel of a talented Seattle system. The 20-year-old blazed through three levels in 2019, topping off at Double-A Arkansas, where he helped lead the Travelers into the Texas League playoffs.

"Anytime you can move across three levels, I think people underestimate the difficulty," McKay said. "That's three apartments, three managers, three hitting coaches, three totally different clubhouses, and he was able to do all of that and fit into each environment pretty quickly and also kind of pick up where he left off on the field. We felt like he was the best player in the South Atlantic League. We felt like he was the best player in the Cal League. He goes right into one of the best teams in Minor League Baseball in Double-A, and he fits right in with the Evan Whites and Logan Gilberts and that group. The flexibility, the adjustability, the ability to move from place to place and still walk into the batter's box and put together a really good at-bat, it's pretty impressive when you think about the age he did it at."

"He walked in with a maturity level and some real skills that I guess you'd have to attribute to his parents and his family because it certainly wasn't something that we taught him all of a sudden," McKay said. "He's a very unique person in terms of his drive to be great. He doesn't hide how he feels. He's pretty clear when he communicates. He wants to be great. He wants to play in the big leagues as soon as he can. He wants to be in the Hall of Fame, and I commend him on having the guts to be so honest about those things and then deal with the looks and the eye-rolling and the reactions to those things."

Julio Rodriguez, West Virginia (67 games), Modesto (17 games): Where Kelenic entered 2019 firmly in the spotlight, Rodriguez was a bit more of a mystery, even to his own organization.

Rodriguez put himself on a full-season roster to open the year with West Virginia before getting hit by a pitch and injuring his hand. Still, his overall numbers were stellar. The 18-year-old batted .326/.309/.540 with 12 homers and 69 RBIs in 84 games and built an organizational foundation with Kelenic.

"Obviously, Julio and Jarred have created a friendship that I think is very mutually beneficial to both of them because they're both really good kids and really good players, but they go at it very differently," McKay said. "I've seen the best parts of Julio rub off on Jarred and I've seen the best parts of Jarred rub off on Julio, and it's been a wonderful friendship for two kids who obviously didn't know each other and then because of the acquisition of Jarred from the Mets, their paths are now intertwined. They really do build off of each other."

Jake Fraley, Arkansas (61 games), Tacoma (38 games), Seattle (12 games): Acquired from the Rays as part of a five-player swap in November 2018, Fraley busted out in the Mariners system. In 99 Minor League games, he hit .298/.365/.545 with 19 homers and 80 RBIs to earn his first big league callup after entering the season with no games played above Class A Advanced since Tampa Bay plucked him out of LSU in the first round of the 2016 Draft.

"He's just a guy that we had to continually remind that he could've been a junior in college last year," McKay said. "He's had some ups and downs -- this year was clearly a lot more up -- but the most important thing he's done is just continue to get better. He's really changed his body and the evolution of the bat continues right in front of us. I think he's that guy that may not be the first guy out of the blocks in the sprint, but when the race is over, he's going to be right there. He made huge strides defensively this year, not only at third base but getting to move around, playing second, playing first. He's creating a lot of flexibility for himself, not only with the bat but with the flexibility in the field."

Right-handed starting pitcher -- Logan Gilbert, West Virginia (five starts), Modesto (12 starts), Arkansas (nine starts): The Mariners snagged Gilbert out of Stetson with the 14th overall pick in 2018, but he got sick and didn't pitch in his first professional summer. Healthy this year, he made up for lost time.

"He missed the first year with the mono, and we thought we knew what we had, but we really didn't know because we didn't really even know him," McKay said. "Then, as you got to know him in Spring Training and really just kind of getting your eyes on him on a daily basis, the diligence and attention to detail in his work routines was what we thought we were drafting when we did. Then to see him work with our analysts, it doesn't mean it's the only way, but he's definitely a guy that can process a lot of information and input it into his game pretty quickly. That's been helpful for us to see and it's been helpful for some other players to see how to use information to your advantage."

Honorable mention: Justin Dunn recorded a career-high 158 strikeouts while walking 39 over 131 2/3 innings for Arkansas and made his big league debut on Sept. 12.

Left-handed starter -- Brandon Williamson, Everett (10 games, nine starts): Drafted in June, Williamson came to the M's with some question marks after surgery to repair the labrums in both hips the previous year. Seattle took him out of TCU in the second round and though his first pro season was limited (15 1/3 innings pitched), it was impressive. The southpaw posted a 2.35 ERA in the Northwest League and fanned 25 while walking nine and limiting opponents to a .167 average.

Relief pitcher -- Sam Delaplane, Modesto (21 games), Arkansas (25 games): Delaplane's numbers make you do a double-take. Across 46 appearances and two levels, the right-hander struck out a jaw-dropping 120 batters over 68 2/3 innings, notching seven saves and a 2.23 ERA. Not bad for a 23rd-round pick in the 2017 Draft.

"It didn't come out of nowhere," McKay said. "What he'd done the year before is quite impressive as well. Sam is one of those guys that's been slow to catch on to any type of industry awareness, I guess. Within the walls of the Mariners, we've been seeing it and the consistency of it. He throws an invisible fastball. Guys just don't hit it, and they never really have. Even when he took it to the [Arizona] Fall League, they really didn't hit it, either. You just see somebody who understands how to elevate a fastball and how to take advantage of vertical ride. He's not the only one in baseball doing it, but he has that knack. I've been telling everybody all year, go find somebody with better numbers because you can't, and he's just equally as impressive as a person."

Honorable mention -- Dayeison Arias notched a 1.15 ERA while converting 13 saves in 14 chances in 49 appearances between West Virginia and Modesto.