Thunder's Deglan pours it on in Finals opener 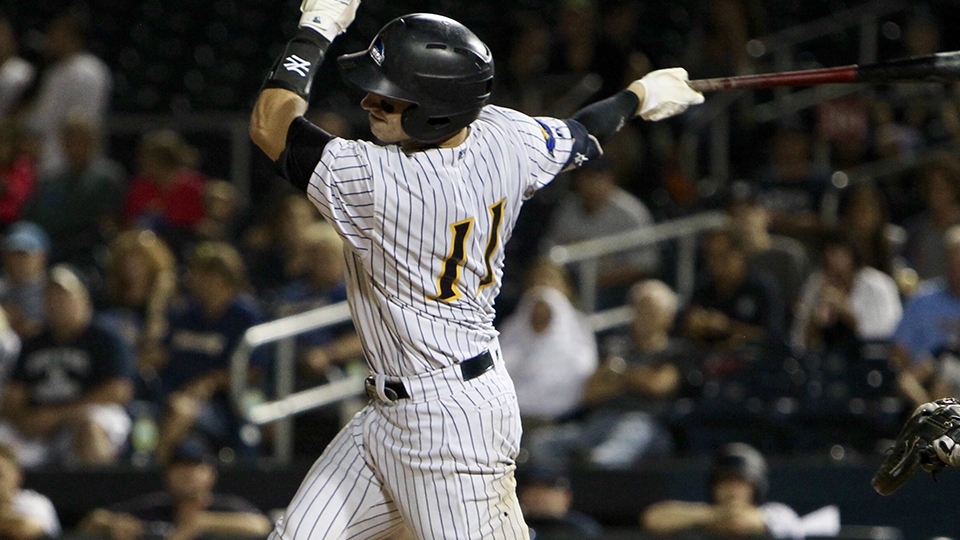 Kellin Deglan is 4-for-14 with a triple, two RBIs and two runs scored in three postseason games. (Rudy C. Jones/MiLB.com)

TRENTON, New Jersey -- Double-A Thunder manager Pat Osborn never doubted his club's potent offense would break through in the opener of the Eastern League Championship Series. The way he put it, "It was just a matter of someone sparking it."

The Yankees farmhand roped a two-out, two-run triple in the sixth inning and scored twice to help Trenton pull away in a 6-2 comeback victory over Bowie in Game 1 of the best-of-5 Finals on Tuesday at ARM & HAMMER Park.

"That was obviously the play of the game," Osborn said. "It broke the game open."

"It was nice to finally get a little separation and get some runs there," Deglan added. "I think it was pretty big. It definitely helped. I mean, everyone helps in the playoffs, so I was happy to help the team today."

The 27-year-old entered the night 2-for-9 through two games this postseason. Over 65 games with the Thunder during the regular season, Deglan batted .265 with 13 doubles, eight dingers and a triple.

Against the Baysox, the 2010 first-round selection of the Rangers lined a single into center field with two outs in the third. He crossed the plate two batters later on a base hit to right by Brandon Wagner that tied the game, 2-2.

After Wagner came around to score the go-ahead run on a fielding error in right by Orioles No. 5 prospect Yusniel Diaz in the fifth, Deglan delivered the knock-out blow in the following frame -- a triple into the gap in right-center on a 2-1 heater from lefty Zach Muckenhirn that scored Isiah Gilliam and Hoy Jun Park. The native of British Columbia scored six pitches later on a sacrifice fly to deep center by Kyle Holder to cap the Thunder's scoring.

"My first at-bat against [Muckenhirn], he threw me all fastballs and he struck me out looking, so I wasn't trying to strike out looking again on a fastball," Deglan said. "So I went in there ready to hit the fastball. I was lucky to get into an advantage count and he left it over the plate and I put the barrel on it.

"Everybody in our lineup just steps up certain games. In my first at-bat with a runner in scoring position, I grounded out, so I felt bad I left the runners on base. But I was happy to come through the next time I had the opportunity. So, I mean, everybody on the team wants to get the job done. Tonight, I guess, I stepped up for us."

The backstop also played a pivotal role behind the plate as the batterymate for three rehabbing Major League hurlers to start the game.

Jordan Montgomery allowed two runs -- one earned -- on two hits and a walk over three innings. The lefty fanned one and retired the last nine batters he faced. Dellin Betances worked around a hit and a walk to post a scoreless frame with two punchouts. And Stephen Tarpley (1-0) allowed a hit and whiffed a pair in a scoreless fifth.

"It's an honor," Deglan said. "I feel a little bit more responsibility, but I take everybody seriously when I'm back there. I try to do my best for everybody, but you know, when I'm catching a big league guy, I know there's maybe a little bit more pressure. You just really want to do a good job and you want to get on same page and you want to get them as comfortable as possible because none of these guys have been on our team. So I just want to make them feel comfortable and as a part of our team."

The Thunder were set up with runners on the corners and less than two outs in the first two innings, but did not score.

"I think even when we were making outs and weren't coming through in those situations, that offensive group is looking around and thinking, well, we can get this guy," Osborn said. "We're gonna be able to do some damage tonight."