Becomes first position player from '17 Draft to make The Show 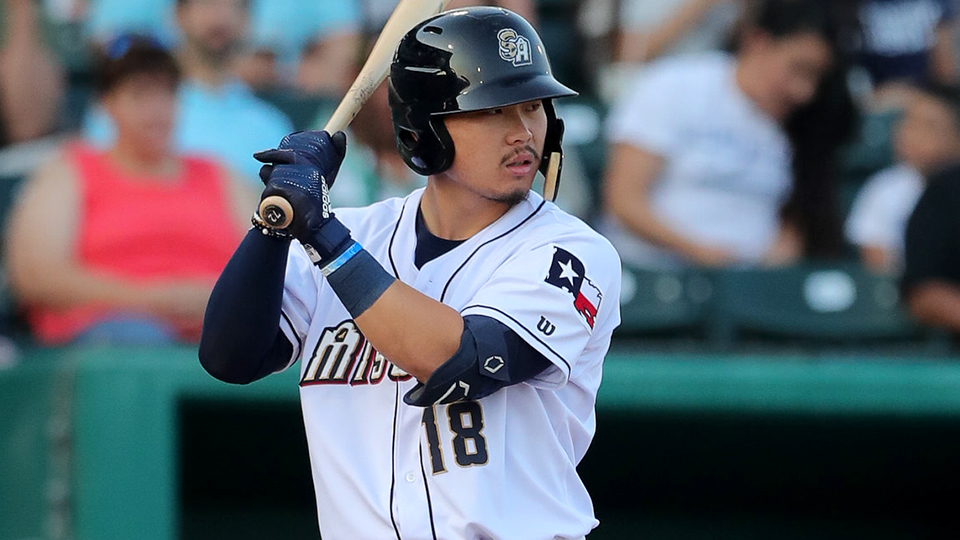 Keston Hiura is a career .316 hitter over his three seasons in the Minor Leagues. (Ozzie Jaime/MiLB.com)

One of the Minors' best overall hitters is now in the Majors.

The Brewers called up top prospect Keston Hiura on Tuesday morning to make his Major League debut. Infielder Cory Spangenberg was designated for assignment to make room for Hiura on the 40-man roster. Travis Shaw was placed on the injured list with a right wrist strain to clear a 25-man spot for Hiura.

In his debut against the Phillies, Hiura collected two singles and drew a walk in the Brewers' 6-1 victory.

Keston Hiura had never gotten a hit in his first AB with a new club. Until today.

"My first Spring Training was about meeting everyone, getting acclimated, stayed a little more quiet and just observed," Hiura told MLB.com Tuesday. "Last Spring Training is where I opened up a little more, got a little more involved. It's a great group of guys. You can tell from the outside looking in that you want to be a part of this team and organization, so I'm happy to be here."

The 22-year-old second baseman ranks sixth in the Pacific Coast League with a .698 slugging percentage and 1.106 OPS through 37 games with Triple-A San Antonio. His 24 extra-base hits are second-most on the circuit, and his 11 homers are tied for ninth-best in the Minors. The right-handed-hitting slugger has produced a .333/.408/.698 line overall in 147 plate appearances this season.

Hiura was taken with the ninth overall pick in the 2017 Draft after hitting .442 in his junior season at UC Irvine. Worries about his elbow hurt his stock slightly, but few doubted his future offensive potential. In ranking him as the No. 15 overall prospect in baseball, MLB.com gave him a 70-grade hit tool and a 60-grade power tool on the 20-80 scouting scale. After playing mostly designated hitter in his first season, Hiura has become a full-time second baseman, leaving his injury concerns in the past.

Coming off a run to last year's National League Championship Series, the Brewers are 24-19, 2.5 games behind the Cubs in a crowded NL Central race. The club has gotten spotty production from third baseman Shaw, who is hitting just .163/.266/.281 with four homers in 40 games. If Hiura is to get regular playing time with Shaw out, free-agent signing Mike Moustakas, who has a .250/.316/.528 line with 10 homers, might move from second base to his natural position at third to allow the top prospect to take over at the keystone.

Hiura became the first position player taken in the 2017 Draft to reach the Major Leagues. Pitchers Kyle Wright, Griffin Canning, Nick Margevicius and Corbin Martin were the only other 2017 picks to get there before him.