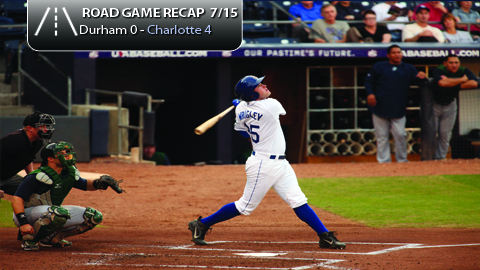 Ft. Mill, SC --- Hector Gimenez and Dallas McPherson homered early to lead the Charlotte Knights to a four-game sweep over the Durham Bulls, winning 4-0 on Sunday.

The Bulls (43-53), which started the series seven behind first-place Charlotte, fell 11 behind and remained winless at Knights Stadium in eight games this season.

The Knights (54-42) pushed in front early against starter Lance Pendleton (L, 4-4). Tyler Kuhn doubled to lead off the game, and scored later in the inning on a deep sacrifice fly to right by former Bull Dan Johnson.

Gimenez homered in the second, with McPherson driving one out an inning later.

The Bulls best scoring chance came in the second when trailing 1-0. One-out singles by Leslie Anderson, Matt Mangini and Tim Beckham filled the bases against Simon Castro, but Jesus Feliciano bounced into a 4-6-3 double play on the first pitch to kill off the frame.

The Bulls suffered their first shutout since June 3rd despite collecting 11 hits. Durham hit into three double plays, and six in the final two games of the series.

Henry Wrigley had three hits including two doubles, while Anderson and Mangini went 3-4.