Knights Rise Up In 9th To Clip Bulls Again, 2-1 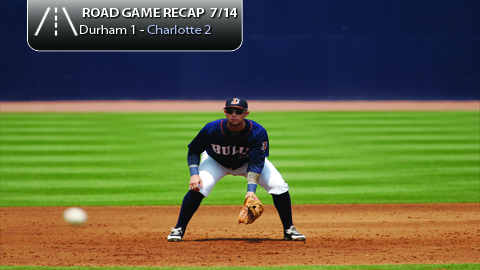 Ft. Mill, SC --- The Charlotte Knights mounted a silent, yet lethal, rally in the ninth, scoring twice to deal the Durham Bulls a 2-1 loss on Saturday night at Knights Stadium.

After taking a 1-0 lead in heavy rain in the second inning, the Bulls weathered a 58-minute delay before returning to action and maintaining their lead until the last of the ninth. Closer Dane DeLaRosa retired the first hitter, then lost a battle against Jeff Baisley in a lengthy at-bat that resulted in a hit by pitch. Ray Olmedo singled on the next pitch to right field, followed by a pair of walks to tie the game. On the next pitch, DeLaRosa's breaking ball hit Drew Garcia in the foot to bring in Olmedo with the winning run.

The Bulls (43-52) lost their third straight in the series against the front-running Knights (53-42) and fell 10 games behind in the South.

Alex Torres started for the Bulls, pitching four scoreless innings around the delay, fanning four and permitting three hits. Frank DeLosSantos threw two scoreless innings, with Cesar Ramos working 1 1/3 hitless frames. DeLaRosa entered with one out in the eighth and fanned Conor Jackson and Dallas McPherson to exit the eighth.

The Bulls took their 1-0 lead in the second just as the heavy rains began to fall. Leslie Anderson drove an opposite-field double to left, then scored on a double to right-center by Matt Mangini with the rains pounding and winds blowing.

The Bulls went 1-10 with runners in scoring position in the game, hit into three double plays and lost three other baserunners.

Jesus Feliciano had two of the Bulls' seven hits, including his 1,500th career minor league hit, a double off the right field wall in his first at-bat in the third inning.