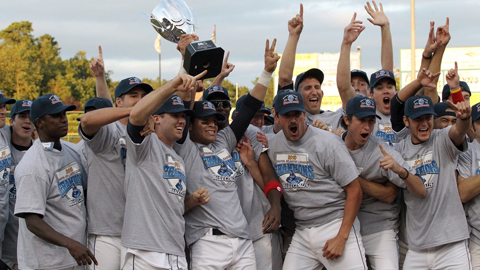 The Lakewood BlueClaws completed the South Atlantic League's version of a triple-double.

After winning the North Division title in both halves of the regular season, Lakewood defeated the Greenville Drive, 4-2, on Saturday to capture its second straight SAL championship.

Sebastian Valle hit a go-ahead three-run homer for the BlueClaws, who became the league's first repeat champions since Savannah in 1993-94. They also are the first team to win the first- and second-half titles and the championship in the same season.

The best-of-5 Finals mirrored last year's series, in which Lakewood also beat Greenville in four games. The Class A BlueClaws won the clincher exactly one year ago.

Under the guidance of first-year skipper Mark Parent, Lakewood went 42-28 in the first half and 42-27 in the second. They won five of seven playoff games.

"Like I said at the beginning, I really wasn't looking forward to [managing] until I saw the kids," Parent told the Asbury Park Press. "Then to see them do this is unbelievable."

His three-run blast capped a four-run fifth inning that helped the BlueClaws erase an early 2-0 deficit.

Jonathan Pettibone (2-0) allowed two runs on five hits and a walk over five-plus innings en route to his second postseason win. Josh Zeid entered with no outs and a runner on first in the sixth and fanned six over four perfect frames.

Zeid retired Christian Vazquez on a fly ball to left field to secure Lakewood's third title since 2006 and set off the celebration at FirstEnergy Park.

"I took extra time between pitches. I walked around the mound a little bit," Zeid told the newspaper. "I took two big breaths before every pitch. You've got to be cool, calm, collected every time. ... You don't want the tying run at bat in a late-game situation in a championship game.

"I owed it to my team. I struggled in the beginning of the year and I finished up strong. This team battled the whole year and I really wanted to finish it for them and win the game and be champions."

Needing a win to force a decisive fifth game that would have followed this one, the Drive grabbed the lead in the third. Derrik Gibson plated a run with a bases-loaded forceout and Reynaldo Rodriguez made it 2-0 with another RBI grounder.

Greenville starter Drake Britton took a two-hit shutout into the fifth but issued a leadoff walk to Brian Gump and a two-out RBI single to Keoni Ruth. Kendal Volz (0-1) came on to face Jonathan Singleton, who singled. Valle followed with a shot over the left-field fence to put the BlueClaws ahead for good.

"The place blew up when Sebastian hit that home run," Zeid said.