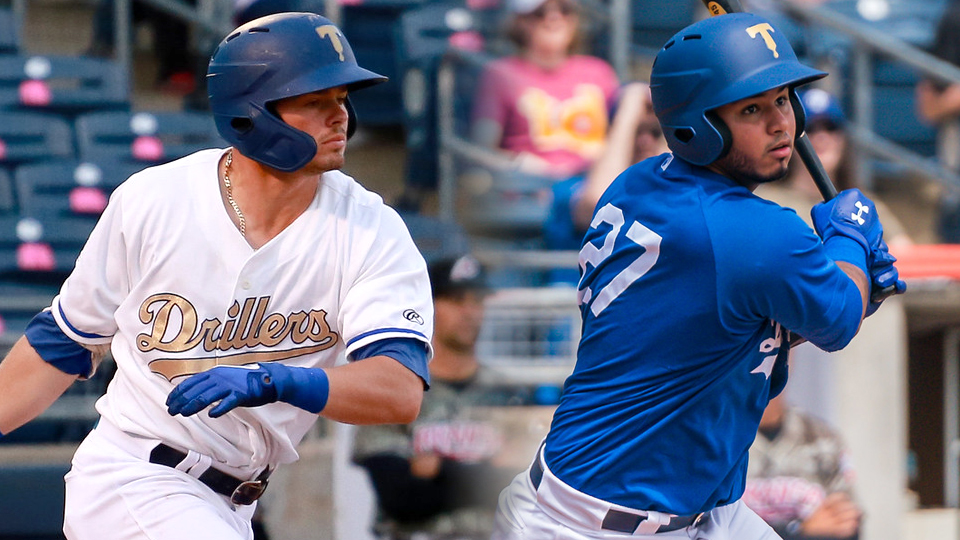 Gavin Lux will head to his second All-Star Game, while Keibert Ruiz has been tapped for his third. (Steven Van Worth, Tim Campbell)

One look at the Texas League All-Star rosters reveals pretty quickly that the North Division has the most loaded of the two on paper. But they still have to play the game on the field.

Six Top-100 prospects will represent the North at the Texas League All-Star Game in Tulsa on June 25, the Double-A league announced Friday.

Half of that contingent will be familiar to ONEOK Field as Tulsa boasts three Top-100 prospects on the North roster: No. 29 Keibert Ruiz, No. 40 Gavin Lux and No. 58 Dustin May. Lux, who will start at shortstop for the North, is tied for the league lead with 13 homers and has a .305/.364/.540 line over 55 games in his second turn with the Drillers. Ruiz -- a Texas League All-Star last season -- is listed as the starting catcher. The 20-year-old switch-hitter is hitting .259/.338/.341 with three homers and an impressive 12/20 K/BB ratio through 51 games and earns marks for his defense behind the plate as well. May owns a 4.13 ERA with 67 strikeouts over 65 1/3 innings, giving him a spot among the 11 pitchers on the North roster.

The other three Top-100 prospects are Arkansas right-hander Justin Dunn (No. 71), Arkansas first baseman Evan White (No. 86) and Springfield outfielder Dylan Carlson (No. 97) with the latter two named as starters at their respective positions. Dunn is second in the Texas League with 72 K's over 59 innings to go with a 3.66 ERA and 1.29 WHIP. White is hitting .289/.360/.476 with eight homers in 43 games, while Carlson ranks fourth in the circuit with an .889 OPS to go with nine homers, 11 steals and a league-best 122 total bases in 62 games.

Not only does the North claim some of the best prospect talent in the Texas League, it also has some of its best statistical performers. Arkansas outfielder Jake Fraley, who is listed as a reserve player, is the league's active OPS leader at .956 and its only player who's reached double digits in both homers (11) and stolen bases (14). On the pitching side, Arkansas right-hander Nabil Crismatt leads in ERA (2.59) and WHIP (0.54), while Springfield southpaw Austin Warner is tops in strikeouts with 75 in 69 2/3 innings.

That said, don't sleep on the South either. Starting third baseman and No. 21 Astros prospect Abraham Toro ranks third in the circuit with a .397 on-base percentage and fifth with an .879 OPS through 61 games for Corpus Christi. He'll be joined by teammate and No. 7 Houston prospect Bryan Abreu, who has 40 K's in 32 innings since moving up to Double-A on April 23. Also on the South pitching staff, Midland right-hander Brian Howard earned his spot with a 3.11 ERA (third-best in the league) over 72 1/3 innings, while Amarillo righty Emmanuel Ramirez brings his 3.84 ERA and 1.10 WHIP (also third-best) over 61 innings.

Tulsa skipper Scott Hennessey and his staff will coach the North side, while Amarillo manager Phillip Wellman and his fellow Sod Poodles will man the South roster. The full Texas League All-Star rosters may be updated as changes occur due to injury or player promotion.