Lookouts' Magill strikes out a dozen 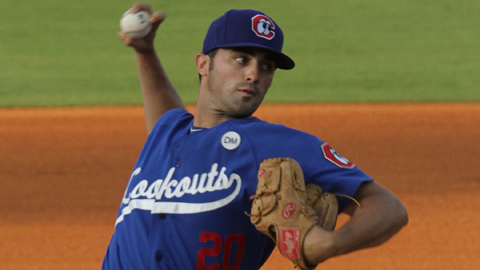 Matt Magill isn't afraid to say it. When he gets two strikes on an opponent, he's looking for a strikeout.

"That's the ultimate goal when I go out there," the Dodgers prospect said. "I love seeing the guy walk back to the dugout, frustrated, with his head down. It's a great feeling. It's why I'm a pitcher."

He had plenty to be proud of Friday night.

Magill tied a career high with 12 strikeouts and allowed three unearned runs on five hits over a season-high 7 1/3 innings as the Double-A Chattanooga Lookouts beat the Mississippi Braves, 8-3.

The Dodgers' No. 19 prospect fanned five -- all swinging -- over the first two innings, with Tim Smith's single in the second breaking up a streak of four consecutive punchouts. He went on to strike out at least one batter in every inning but the eighth.

"I was able to get all of my pitches over for strikes," said the 22-year-old right-hander, who threw 72 of 110 offerings for strikes. "The fastball, curveball, changeup, curveball and slider were all working. I knew they were a pretty good hitting team, so I was just trying to keep them off-balance. And luckily, I was able to throw all four whenever I needed to."

The 12 strikeouts tied the career high Magill (9-5) set exactly one year and one day earlier for Class A Advanced Rancho Cucamonga. Although he didn't acknowledge any particular fondness for early August, he noted that the two dates weren't exactly coincidental.

"I usually feel stronger as the year goes along," Magill said. "The innings during my outings are getting longer and I feel like I can go deeper the more I go out there. At this point in the season, I'm confident with all my pitches, and that starts to show."

The California native leads the Southern League and ranks sixth in the Minors with 131 strikeouts over 114 2/3 innings. Ironically, Magill's closest pursuer within the league is former teammate Ethan Martin, who was traded to the Phillies organization in the Shane Victorino deal.

Magill said he had a mini rivalry with Martin before he moved on.

"We were battling it out all year back and forth while he was here," Magill said. "We joked here and there about it a lot. Now that he's gone, it's kind of a bummer. ... I'm going to text him later and see how he did tonight."

In his Eastern League debut for Reading on Friday, Martin fanned six over six innings.

The Lookouts were coming off back-to-back losses in which they were one-hit and no-hit by the Huntsville Stars.

"I just knew I had to do my job and not worry about that," Magill said. "I knew these guys were going to turn it around at some point, and they got eight runs tonight. I knew that wouldn't last long."

Jake Lemmerman, who personified the Lookouts' struggles by entering the game in an 0-for-18 funk, went 3-for-4 with a homer, two doubles and four RBIs.

Sam Dykstra is a contributor to MLB.com. This story was not subject to the approval of the National Association of Professional Baseball Leagues or its clubs.