No. 5 prospect fans 11 in 11 frames in second week with Tulsa 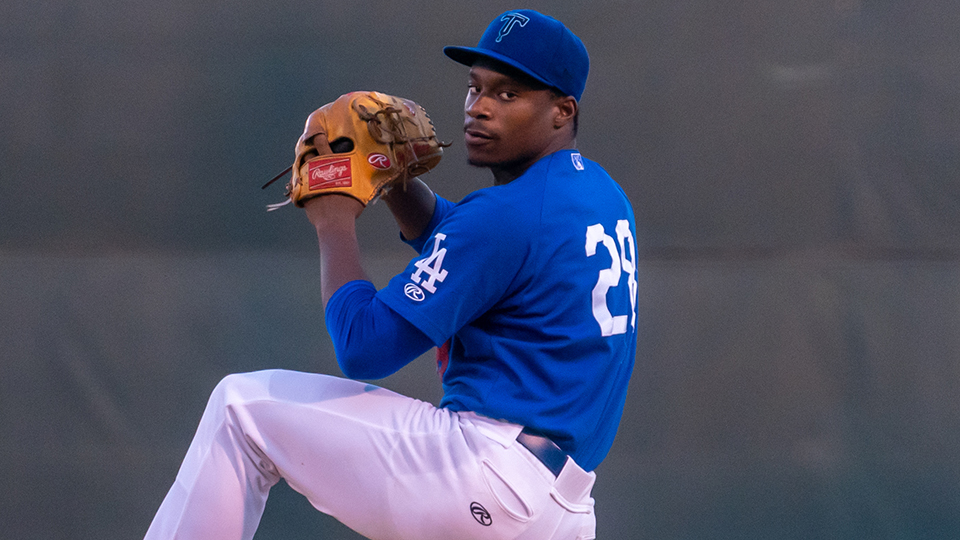 Josiah Gray has posted a 0.90 WHIP over 114 innings between three levels this season. (Tim Campbell/MiLB.com)

There was a time last week when Josiah Gray thought he might be traded -- again. It's tough to blame him. The 21-year-old right-hander was taken 72nd overall by the Reds in the June 2018 Draft, and six months later, he was moved to the Dodgers as part of the blockbuster that sent Yasiel Puig, Alex Wood and more the other way.

"I was antsy at the deadline because I knew the Dodgers were out there looking at making deals, and you always wonder if you're going to be involved," he said. "But when everything passed, I was grateful they kept me. I think it says something about what they see in me. At the same time, I couldn't let it affect my game. No matter what, the biggest game is the next one, and that's what I'm always thinking."

Given the way things are going, Los Angeles should be increasingly happy Gray remains in its farm system.

Gray's week began when he tossed five scoreless innings last Monday in Midland, striking out four while scattering four hits and a walk en route to the win. His next outing came Sunday with a quality start at home against Northwest Arkansas as he picked up his second win of the week. The 6-foot-1 righty set a personal Double-A high with seven punchouts and allowed just one earned run on three hits and a walk. It was also his first time he eclipsed the 100-pitch mark this season, throwing 102 pitches, 64 of which were for strikes.

What makes the award-winning week more impressive is that it included Gray's third and fourth start with the Double-A club. The New York native opened the season at Class A Great Lakes, where he made only five starts, before moving up to Class A Advanced Rancho Cucamonga on May 11. He posted a 2.14 ERA and 0.97 WHIP with 80 strikeouts in 67 1/3 innings with the Quakes and was bumped up to Tulsa on July 17.

"[Pro ball] is something I heard a lot about, but you can't really understand it until you experience it for yourself," Gray said of his first full season. "I think all of this is going to pay off really in the long run. This whole year has been about learning how to adjust really quickly. A hop, skip and a jump here. A hop, skip and a jump there. It's all been about going with the flow, knowing what I can do at every level."

Going with the flow means having to adjust to the most experienced hitters Gray has seen in his days as a pitcher, which began when he made the move from shortstop at Division II Le Moyne (New York) College in 2017. The right-hander has dominated in part because of a low-to-mid-90s fastball that he pairs with a slider (what he calls his "bread and butter"), an improving curve and an average changeup. That package worked in college as well as in the Appalachian, Midwest and California Leagues, but Gray admits he's been getting different feedback on his stuff and instead has to rely more on his impressive control the closer he gets to Los Angeles.

"The first thing is these guys aren't swinging and missing as much," Gray said. "So I have to tailor what I'm trying to do a little different because I know the strikeout numbers aren't going to be what I want them to be, unless I exploit the other weaknesses I'm seeing. I just have to be aggressive in the zone, knowing they'll be aggressive too, and take things from there. It's simple things like that."

In fact, Gray's swing-and-miss rate is 9.7 percent during his four starts, down from his average of 16.3 percent on the season. But with only three walks issued in 23 1/3 Double-A innings so far, he's making sure to limit the damage he inflicts upon himself.

Gray's stock has soared in his first full season as he's climbed from No. 18 in MLB.com's preseason Dodgers prospect rankings to his current spot at No. 5, making him the organization's highest-ranked prospect outside the Top 100.

"The biggest thing is, health-wise, that I can prove I can go a full year," Gray said of his 2019. "But beyond that, I'm just trying to show I can adjust. I came to Spring Training not knowing anyone, not knowing any coaches. Being able to get through that and then being able to pitch at three different levels, I hope I'm getting them to think, 'Hey, this guy can handle any of the things we put in front of him, and he can perform on top of that. Let's throw him on the biggest stage we can and see what he can do.'"

Below is the complete list of Minor League Pitchers of the Week for July 29-Aug. 4: