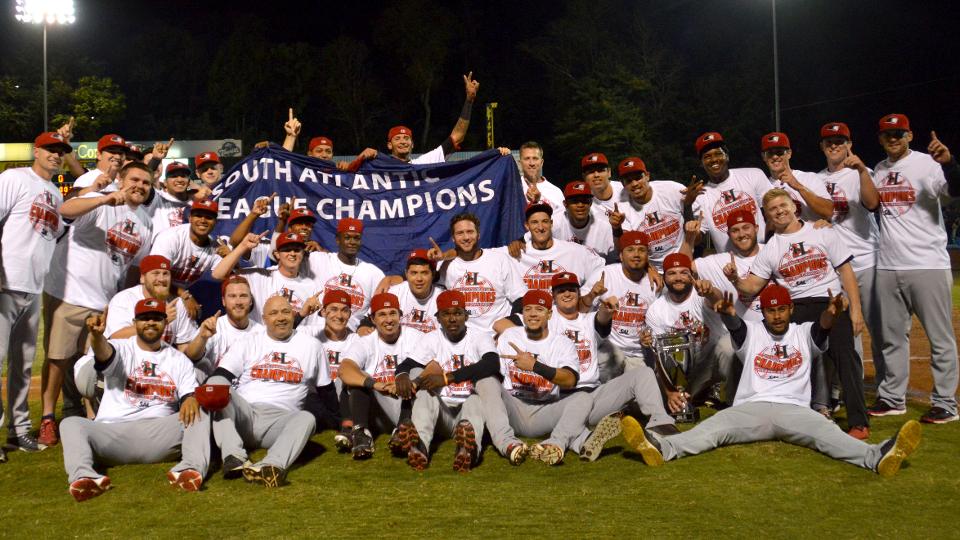 Squaring off against a rehabbing Major Leaguer with a top prospect waiting in the wings to follow, it might have been considered a tall task for the Crawdads to finish off a three-game sweep of the defending-champion Tourists. Yohander Mendez was up for the challenge.

Texas' No. 10 prospect struck out eight over 5 1/3 innings, both season highs, and allowed one run on nine hits as Class A Hickory wrapped up its first South Atlantic League title since 2004 with a 5-1 win over Asheville on Thursday night.

"In my first year of professional baseball, I got a ring. I'm going to wake up tomorrow and realize that I'll have that for the rest of my life."

Mendez worked just one clean inning, when he retired the side in order in the fifth, but never let Asheville deal a big blow. The Tourists stranded runners in scoring position in every other inning against the left-hander, who departed after allowing consecutive one-out singles by Omar Carrizales and Cesar Galvez in the sixth. Reliever Joe Filomeno got him out of the jam with back-to-back strikeouts.

Mendez (1-1) fired 63 of his 89 pitches for strikes. His strikeout total came within two of matching a career high.

Hickory drew a tough assignment with rehabbing Colorado starter Tyler Chatwood getting the ball for Asheville. Chatwood (0-1), on the road back from 2014 Tommy John surgery, walked two over his first two innings, but avoided further damage. He was unable to do the same in the third when Juremi Profar led off with a walk and scored on Jose Cardona's RBI double to right field. Cardona later crossed the plate on Moore's sacrifice fly to center.

"I actually grew up watching Tyler Chatwood play for the Angels because I'm from Southern California," said Moore, who joined Hickory four games before the playoffs after spending the regular season with Class A Short Season Spokane. "Watching him and then going up and facing him, it was kind of a surreal moment for me.

"I think we can score against anyone with the way we were playing and the way we've really gotten after it these two weeks that I've been here. We've got a potent offense and a really good defense and pitching staff to where all we have to do is score a couple of runs, and then we pretty much had it in the bag."

Following Filomeno's scoreless 1 2/3 innings, No. 3 Rangers prospect Dillon Tate fired a shutout frame before Scott Williams closed the game out. By that point, Hickory had tacked on two insurance tallies in the top of the ninth charged to No. 18 Rockies prospect Jesus Tinoco, who went 5 2/3 innings to close the season.

"Going into the last inning where we got those couple of runs, it really solidified for us," Moore said. "I literally got butterflies in my stomach running out there [for the ninth], which never really happens unless it's your first game. When I got out there, it was crazy. We got ... the last out, I ran over to [shortstop] Edwin Garcia [to celebrate]. It was crazy."

The title was Hickory's third in South Atlantic League history.