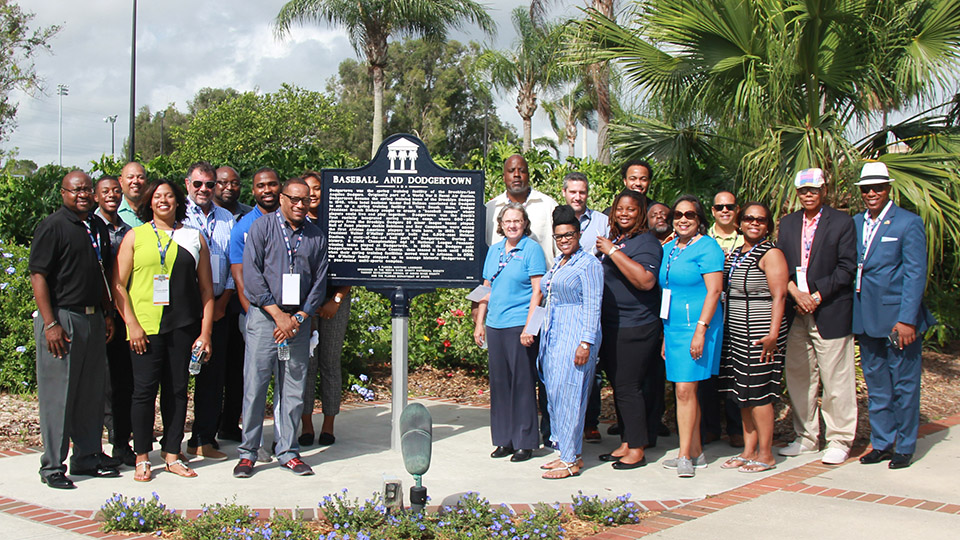 The event took place June 19-22 at Historic Dodgertown in Vero Beach, Florida, and featured a select group of 20 representatives from consulting firms, community organizations, the National Collegiate Athletic Association (NCAA) and Minor League Baseball teams. The purpose of the event was to engage in dialogue geared toward advancing diversity and inclusion in the game of baseball. The attendees were placed into an environment where open discussion was encouraged in an effort to analyze the game and business of baseball.

The program included a tour of Historic Dodgertown, open discussion, and a variety of workshops. Topics included unconscious bias training, the unintended impact of advertising, the optimization of partnerships, and diversity and inclusion issues in both baseball and society. The representatives received hands-on unconscious bias training from the National Consortium for Academics and Sports (NCAS) and an overview of the Minor League Baseball Diversity Initiative.

For the league to continue to move the MiLB Diversity Initiative forward, the addition of the Think Tank Program allows Minor League Baseball to benefit from the perspective of representatives from outside the industry. This positions the league to build deeper relationships with current partners, establish new relationships, and collectively build the best strategies for advancing diversity.

The program's four-day series of events included an emphasis on diversity and inclusion regarding education, representation and the status within the sport of baseball.

The first night was an opportunity for the representatives to meet their counterparts for the first time, as communication regarding attendance was kept from the attendees leading up to their arrival. The expectations and protocol for sensitive topics was set, and the reception served as an icebreaker for the days to come.

On a warm Tuesday morning, the representatives made their way through the entrance of the Jackie Robinson Room, past an indoor mural which depicts the history of Spring Training for the Los Angeles Dodgers and their Minor League affiliates. The multi-sport facility is filled with references to the six championships the Dodgers won and the visuals of past players and events. Two walls stood out amongst the rest of the facility, one showcasing Jackie Robinson himself while another, at Holman Stadium, shares the names of all the greatest Dodgers to come through Vero Beach.

The attendees found themselves in an adjustment period from the humidity experienced during the tour to a cool, air-conditioned building as they prepared for two workshops. The Unconscious Bias Workshop, presented by NCAS, began with an icebreaker for the members to learn about one another, and to recognize the biases they hold. This would lay the foundation for a series of discussions pertaining to leadership, implicit egotism, confirmation bias, and more. An exercise during the workshop would ultimately generate discussion and deductive reasoning.

"I really enjoyed the fact that we were in a room where we could be honest with one another, and where if we didn't agree with something we could say that, and we could hash that out," Victoria Woodards, Director of Community Development for the Tacoma Rainiers, said. "Nobody got mad, nobody left the room, because we were all there for the betterment of the project.

"Just to hear the different thoughts and the different ideas and the ways that we could really make a difference in this thing we call diversity and inclusion in Minor League Baseball was absolutely an amazing opportunity," added Woodards.

The group then discussed issues and topics within diversity and inclusion in baseball, and held an open discussion for new strategies, shared successes and failures. During the remaining day and a half, the representatives took part in a series of workshops regarding the MiLB Diversity Initiative, recruitment and retention of minorities and women, and job opportunities and programs for youth.

The final day saw Minor League Baseball President & CEO, Pat O'Conner, speak to the representatives in the continued theme of an open discussion about the vision for the MiLB Diversity Initiative in the future. Subjects included successfully incorporating the initiative into current MiLB markets, what Minor League Baseball is doing well, what needs further growth, and the impact and takeaways presented to the representatives in attendance.

"As the country changes, from a demographic profile, we need to make sure that from the inside-out baseball is reflective of the communities it is operating in," O'Conner stated. "We set upon an initiative that allows us to provide resources, options, and information to the clubs to help them diversify their staff."

The Think Tank Program was created to bring in an outsider's perspective to aid in building strategy for the future of the diversity initiative. This platform also allowed representatives to understand and become aware of issues in diversity and inclusion specific to baseball.

"This was huge for my own personal growth, and I think it's going to make me a better educator and a better mentor to a lot of my students," said Sam Renault, Assistant Director of Arizona State's Sports Law and Business Program. "For me to bring back what I've learned here, and not even just the information I took in, but the relationships that we started here, I think are going to pay off in a lot of different ways."

The representatives of the program received an extended invitation for their students to be considered for the second annual Minor League Baseball FIELD (Fostering Inclusion through Education and Leadership Development) Program on August 7-11, for an opportunity to learn the game and business of baseball.