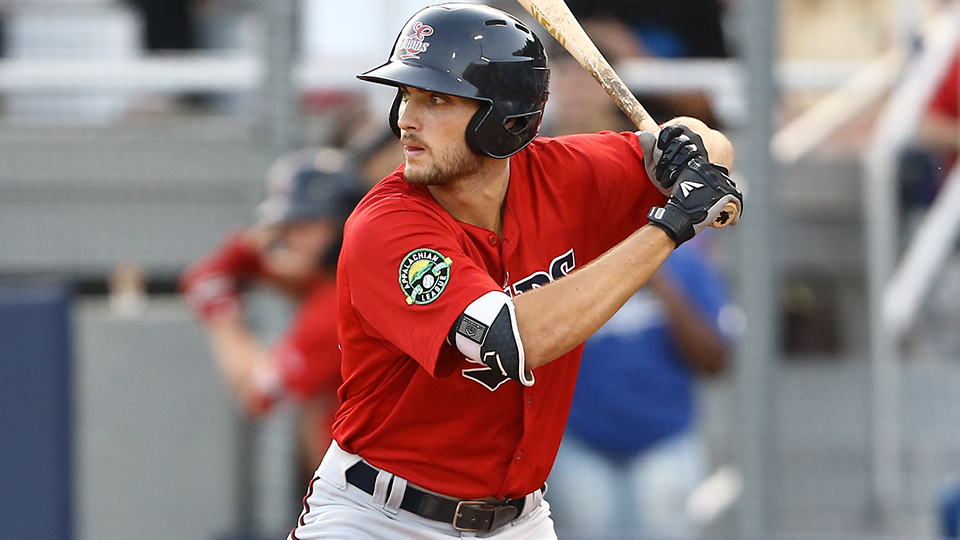 The 39th overall pick in June, Matt Wallner is hitting .282 with five homers and 24 RBIs in 46 games. (Allen Greene/Kingsport Mets)

Playing in the hills of eastern Tennessee has become just another change of pace for Elizabethton Twins right fielder Matt Wallner. It's back home where the native Minnesotan would like to eventually end up.

Wallner began his professional career just weeks after the Twins made him a competitive-balance pick (39th overall) out of Southern Mississippi. Growing up about 30 miles north of Minneapolis, Wallner admired hometown Major League standouts such as Torii Hunter and Justin Morneau.

So with the home-state team selecting him in the Draft, he knows that a certain level of fan excitement is bound to follow.

"Trying not to think about it too much," Wallner said. "With college and all the hype, that helped prepare me. Even better [that it was the Twins]. It's different once it's a reality."

Wallner has made a habit of adjusting on the fly. As a high school senior, he had signed to play college ball for North Dakota, which then dropped its baseball program. Wallner found a spot at far away Southern Mississippi.

He said he had heat shock when he arrived for school. But he also was productive on the field, which carried through three seasons.

Now he's grinding through the summer with the Appalachian League season coming on the back of a college season. The 15th-ranked prospect in the Twins system said the everyday schedule with Elizabethton had been a new challenge.

Elizabethton manager Ray Smith said for the organization, it's a potentially ideal storyline.

"He grew up as a Twins guy," Smith said. "He has a ways to go, and he understands that."

With the increasing emphasis on analytics at the collegiate level, playing in the Appalachian League where there are numerous young Latin American pitchers means the heaps of data Wallner is used to aren't necessarily available.

"We'll be looking up guys and you won't have anything," Wallner said. "You just have to go by feel."

The Elizabethton roster has been packed with players out of college, so that puts many of Wallner's teammates in a similar situation. He didn't know any of them when he joined the team.

"Getting used to pro ball, it has been a great place for me," he said. "We have more college guys than a lot of teams. We've had fun with that."

So Wallner's travels have been notable at this point. There's an ideal destination in this journey.

Porter does it all: Logan Porter of the Burlington Royals racked up 14 RBIs in a six-game stretch. The most memorable came with an inside-the-park home run at Johnson City. His shot off the wall in right-center field bounced back toward center. "I put my head down and went. I was burning. That was the first time I've ever done anything like that," said Porter, who's listed as a catcher but plays mostly as a first baseman and designated hitter.

Stallings' strange stretch: Mitch Stallings of the Danville Braves leads the league in ERA even though he's been tagged with losses in five of his last six outings. In those defeats, the second-year pro out of Duke has allowed more than one earned run only twice. Through 51 innings this season, Stallings hasn't surrendered a home run.