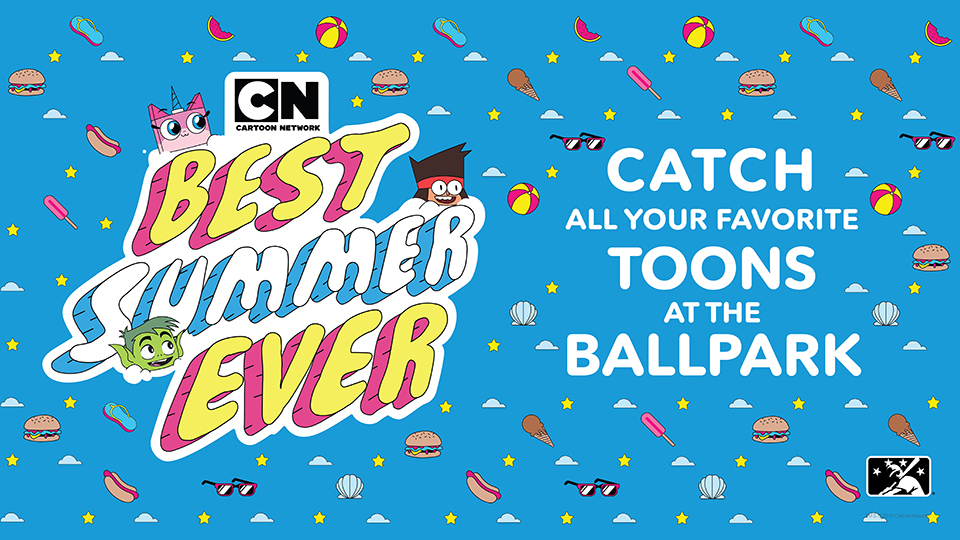 ST. PETERSBURG, Florida -- Minor League Baseball™ (MiLB™) and Cartoon Network (CN), the No. 1 animation network in the U.S., announced a summer-long promotion today in select markets across the country. The in-park "Best Summer Ever" program, an extension of the summer Cartoon Network campaign, seamlessly combines baseball games and CN original series, delighting both kids and adults alike. The campaign launched on Saturday, June 23, and will continue through Sunday, Aug. 26.

"Minor League Baseball's fan demographics and its reputation as a brand centered around fun are an ideal match to Cartoon Network's target audiences, and using MiLB ballparks as the setting to entertain our next generation of fans with animation is a win for both brands," said David Wright, Chief Marketing & Commercial Officer for Minor League Baseball.

"Cartoon Network has promised our viewers the Best Summer Ever and we are delivering in a new way with this partnership. We look forward to kids and families experiencing our content in a new environment alongside the fun of Minor League Baseball," said Ryan Kilpatrick, Vice President of Marketing for Cartoon Network.

Minor League Baseball expects to attract nearly 20 million to its ballparks during the balance of the 2018 season. For a complete schedule of remaining games this season and ticket information, visit MiLB.com/tickets.

Cartoon Network is Turner's global entertainment brand and the #1 animation network in the U.S., offering the best in original content for kids and families with such hits as, Adventure Time, The Powerpuff Girls, Steven Universe, We Bare Bears and The Amazing World of Gumball. Seen in 192 countries and over 400 million homes, Cartoon Network is known for being a leader in innovation with its approach to engaging and inspiring kids at the intersection of creativity and technology. Its pro-social initiative, Stop Bullying: Speak Up is an acknowledged and often used resource for kids and adults looking for tools that can assist in dealing with the ongoing issue of bullying.

Cartoon Network is part of Turner, a WarnerMedia company, a global entertainment, sports and news company that creates premium content and delivers exceptional experiences to fans whenever and wherever they consume content. These efforts are fueled by data-driven insights and industry-leading technology. Turner owns and operates some of the most valuable brands in the world, including Adult Swim, Bleacher Report, Boomerang, Cartoon Network, CNN, ELEAGUE, FilmStruck, Great Big Story, HLN, iStreamPlanet, Super Deluxe, TBS, Turner Classic Movies (TCM), TNT, truTV and Turner Sports.