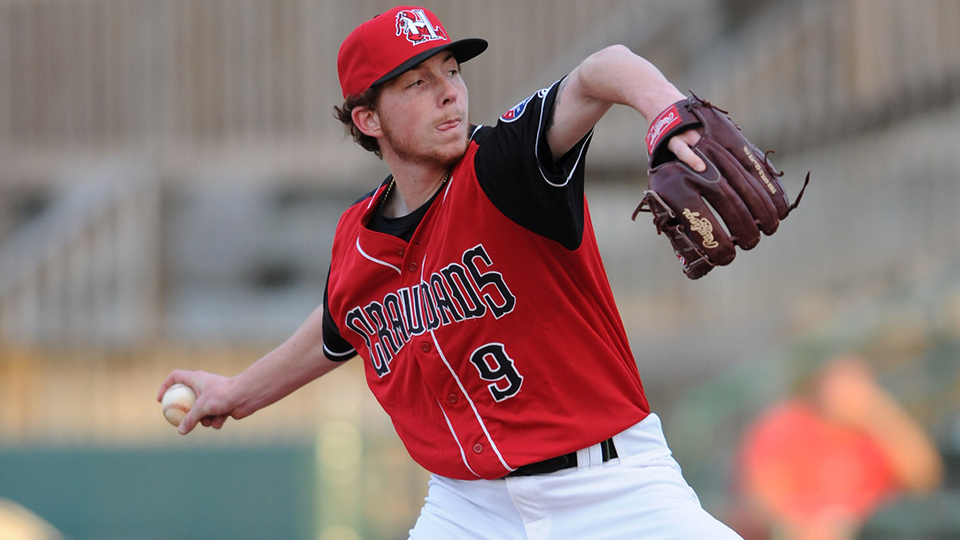 Showing potential in big spots: Triple-A Durham and Class A Advanced Clearwater clinched playoff spots Wednesday night, and both relied on top talent to push them over the edge. The former got a three-homer performance from Austin Meadows -- a former top-100 prospect acquired from the Pirates in the Chris Archer deal -- to capture the International League South Division crown. The latter used a gem from No. 69 overall prospect Adonis Medina (7 IP, 5 H, 1 R, 1 BB, 7 K) to defeat Jupiter and claim the Florida State League North Division second-half title. The Bulls and Threshers are going to need their big names to rise to the occasion again next week when the playoffs begin.

Rangers RHP A.J. Alexy, Class A Hickory: 6 IP, 3 H, 0 R, 2 BB, 10 K, 89 pitches, 62 strikes -- This was the second straight 10-strikeout start from the Rangers' No. 19 prospect and the fourth consecutive start in which he fanned at least eight. Alexy hasn't allowed more than two earned runs in an outing since July 13. That's a seven-start stretch in which he's posted a 1.60 ERA with 55 strikeouts and 11 walks over 39 1/3 innings. The 20-year-old right-hander has a plus fastball and impressive curveball to get plenty of whiffs -- his 30.5 percent strikeout rate ranks second among South Atlantic League qualifiers.

Phillies OF Dylan Cozens, Triple-A Lehigh Valley: 2-for-4, 2 HR, 3 RBI, 2 R, K -- The Phillies' No. 16 prospect and 2016 Joe Bauman Home Run Award winner hitting dingers in bunches is nothing new. Cozens has hit multiple homers in six of his 87 games with Lehigh Valley this season, and his .287 isolated slugging percentage is tops among IL batters with at least 300 plate appearances. But the 24-year-old, left-handed slugger has been flirting with the Mendoza line for much of August, and even after this game, he has a .203/.294/.475 line in 19 games this month. As a member of the 40-man roster with 14 games of Major League experience this season, he'll head to the big club in September. Philadelphia acquired Justin Bour from the Marlins to be a big power bat off the bench, but he's on the disabled list with an oblique injury, giving possibly giving Cozens an opportunity to shine.

Cubs LHP Brendon Little, Class A South Bend: 5 IP, 2 H, 0 R, 0 BB, 5 K, 60 pitches, 39 strikes -- It's been a rough year for the 2017 first-rounder, who entered Wednesday's outing against Bowling Green with a 5.42 ERA and having allowed nine earned runs over 4 2/3 innings in his last two outings. He completely flipped the script with his first scoreless outing since July 8 and did so against the club that leads the Midwest League in average and OPS. The Cubs' No. 7 prospect has lost a little velocity from his college days and is still working on his changeup but does have a plus curveball.

Matt Manning vs. Carter Kieboom: The Tigers keep finding ways to push Manning, giving him a debut with Double-A Erie, his third club of the season. In making his Eastern League bow, MLB.com's No. 56 overall prospect was charged with facing Harrisburg and No. 34 overall prospect Kieboom. The 6-foot-6 right-hander showed some nerves, plunking the Senators shortstop on a 1-2 pitch in the first inning, but calmed down enough to get Kieboom to pop out to first base in the third and strike out swinging in the sixth. Manning finished with eight punchouts, three hits and one walk over six scoreless innings. More on that gem can be found in Michael Avallone's story here.

Tigers OF Christin Stewart, Triple-A Toledo: 2-for-4, HR, 2B, 3 RBI, R, BB, K -- The Tigers' No. 6 prospect is eligible for the Rule 5 Draft this offseason and will likely be protected by being added to the 40-man roster. After picking up two extra-base hits and reaching base three times, Stewart is hitting .275/.436/.484 with four homers and an even 23/23 K/BB ratio through 27 games this month. His 22 homers on the season are tied for most in the International League. At 53-80, the Tigers have little left to play for, so they could decide to purchase Stewart's contract early and see how he handles the Majors during roster expansion in September. That could help decide his long-term place in Detroit's plans.