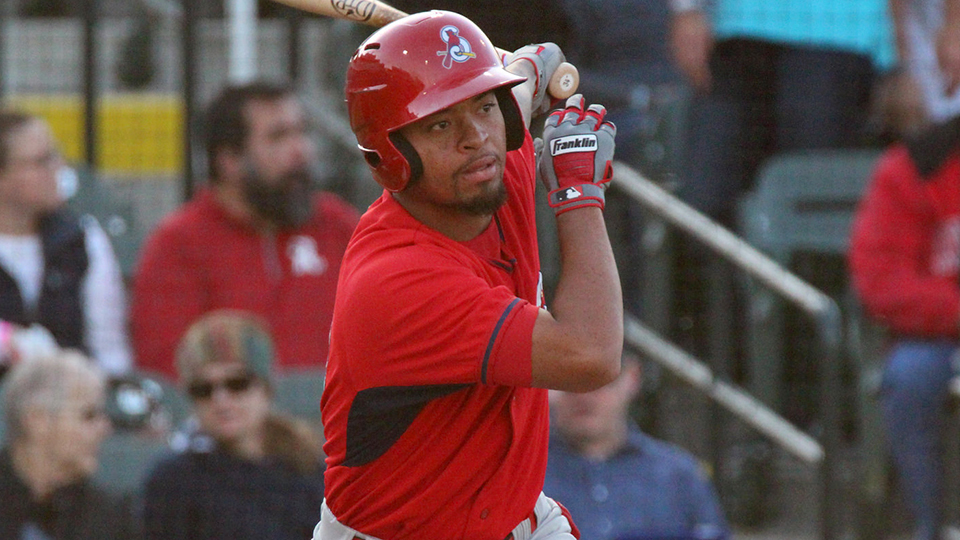 Playing to their strengths: Alex Wells throws a ton of strikes. Jorge Guzman chucks high heat. Peter O'Brien has a lot of raw power. All of those skill sets were on display Monday night. Wells struck out nine and allowed three hits and no walks in eight innings for Class A Advanced Frederick, and needed only 85 pitches to do so. Guzman touched 100 mph several times on his way to fanning 10 batters in 5 2/3 scoreless innings for Class A Advanced Jupiter. O'Brien went deep twice and has tied a Southern League record with homers in six straight games for Double-A Jacksonville. It can be fun to see something unexpected at the ballpark, but it's also fun when players with elite tools show them off.

Cardinals SS Edmundo Sosa, Double-A Springfield: 4-for-5, 2 HR, 2 RBI, 2 R -- The Cardinals' No. 12 prospect had hit only four homers combined in 2016 and 2017, so the fact that he had five blasts in his first 55 games of 2018 was a promising sign. Then he went deep twice for the first time since Aug. 18, 2015 with Rookie-level Johnson City. His seven homers tie his career high for a season, and there are still 2 1/2 months to go. The Panama native has dealt with wrist, hamate and ankle injuries, but has always been regarded as a solid-hitting, good-fielding infielder with above-average speed. If he can add even a little power to that profile, his stock should rise this summer. He's now hitting .281/.321/.452 with seven homers, a triple and 14 doubles in 56 games with Springfield.

Marlins OF Monte Harrison, Double-A Jacksonsville: 1-for-5, HR, 3 RBI, R, 3 K -- O'Brien may have grabbed the headlines for his historic power performance, but the Marlins' top prospect nearly stole them away with his three-run, walk-off homer in the Jumbo Shrimp's 6-5 win over Biloxi. Harrison needed that dramatic long ball, not only because he had fanned in three of his previous four at-bats, but also because he was 2-for-20 with nine strikeouts in his previous six games. The right-handed slugger is hitting .227/.305/.408 with nine homers and 10 steals in 62 games. With a Southern League-high 102 strikeouts, his swing is a little too all-or-nothing right now, but when he does make contact, it's noticeable.

Brewers LHP Kodi Medeiros, Double-A Biloxi: 6 IP, 4 H, 1 R, 1 ER, 1 BB, 8 K, 101 pitches, 60 strikes; 1-for-3, HR, 4 RBI, R, K -- If one were to guess which player in Monday's Biloxi-Jacksonville matchup was most likely to hit a grand slam, one might go through the 16 position players and then a couple of bench options before landing on Medeiros, the Biloxi starter who was hitless in his first nine Minor League at-bats. And yet the No. 18 Brewers prospect connected on a homer with the bases loaded in the fifth inning. This was no cheap shot -- the ball landed in the back end of the bleachers in right field of the Baseball Grounds at Jacksonville. Medeiros's pitching performance was solid too -- he matched his season high in strikeouts and tossed his third quality start of the season.

Brendan McKay vs. Kevin Smith: The Rays' No. 3 prospect is taking his lumps lately on the mound. McKay suffered through his worst start of 2018 by allowing five earned runs on six hits and three walks in 2 2/3 innings. After starting with two scoreless outings in the Florida State League, he's seen his ERA balloon to 4.63 through five starts. It didn't help that he had to face Smith, who has been one of the Minors' best hitters in 2018, with a .353 average and 1.015 OPS. After flying out to right in the first, Smith collected an infield single to open up a two-run third inning that would eventually chase McKay. The good news for the Stone Crabs starter is that Charlotte and Dunedin don't cross paths again until August, and it's impossible to guess whether McKay or Smith will still be with their respective clubs by then.

Rangers OF Willie Calhoun, Triple-A Round Rock: 3-for-4, HR, RBI, R -- The common theme around Calhoun's 2018 season is that he's not living up to expectations. Whether that's true or not, he's changing the narrative. MLB.com's No. 45 overall prospect collected multiple hits for the fourth time in five games and hit his second homer in that span. After a rough April, Calhoun is batting .302 in 37 games since the start of May. What hasn't really shown up yet is his power. The left-handed slugger has gone deep only three times in May and June and has just six homers in 62 games overall. His Pacific Coast League slugging percentage has dropped from .572 in 2017 to .412 currently. The hits are starting to fall, however, and the power could be next.