Prospect Roundup: Games of May 28

Guerrero runs streak to 36 games; Clarke closes May with gem 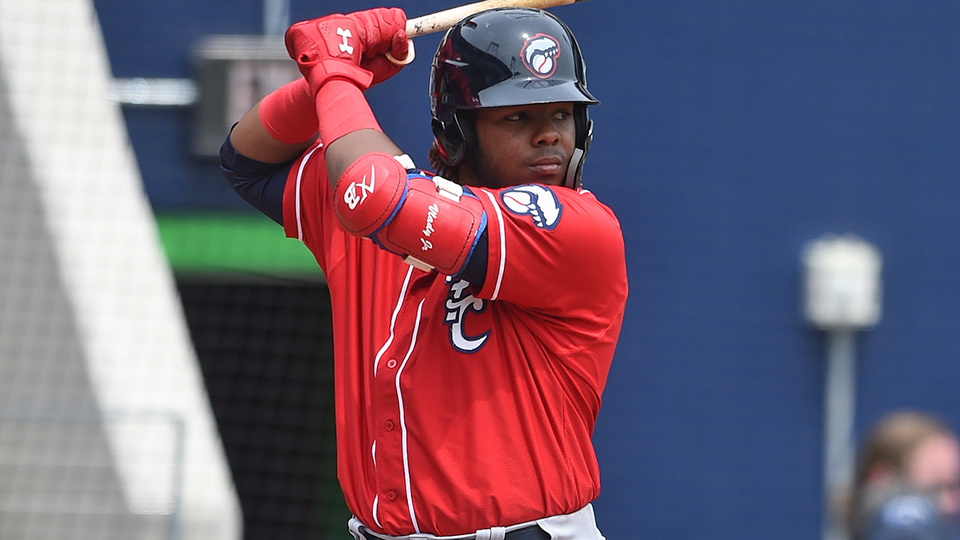 Memorial Day fireworks: Top Mariners prospect Kyle Lewis led the way with a two-homer game for Class A Advanced Modesto. The day's most dramatic home run came earlier, however, when Rays prospect Zach Rutherford hit his second homer of the day in a 5-for-5 performance for Class A Bowling Green. The long ball came during a downpour in the eighth inning, and the game was put into a delay and officially called soon after Rutherford's hit cleared the fence. Because of the rain and the umpires signalling for a delay, Vidal Brujan, who was on second base, never crossed home plate and was not officially counted as having scored. Rutherford's grand slam, therefore, technically went down as a three-run homer. "I couldn't even see it land," Rutherford told MiLB.com's Nathan Brown.

Blue Jays 3B Vladimir Guerrero Jr., Double-A New Hampshire: 2-for-4, 2B, RBI, R, K, SB -- Make that 36 straight games in which the Blue Jays' top prospect has reached base. That's the longest on-base streak in the Eastern League this season by nine games. Guerrero wasted no time in extending the run when he doubled off No. 97 overall prospect Peter Lambert in the first inning of New Hampshire's 5-2 win at Hartford. The 19-year-old third baseman managed to bump his Minor League-leading average up to .433 -- no other qualified Minor Leaguer is hitting above .415 -- and his 1.194 OPS is the highest among players yet to see the Majors this season. He has 29 extra-base hits and only 20 strikeouts through 46 games. Whenever we run out of ways to be astonished by MLB.com's No. 2 overall prospect, he keeps improving.

Red Sox 1B Sam Travis, Triple-A Pawtucket: 2-for-4, HR, RBI, 2 R, BB, K -- The Red Sox made waves last Friday when they designated Hanley Ramirez for assignment, thus choosing to move on from the struggling slugger and handing first-base to Mitch Moreland. Travis, the No. 5 prospect in the system, could stand to benefit as he slides up the Boston depth chart. However, it hasn't been a banner third year in Pawtucket for the 24-year-old. Travis is hitting just .225/.290/.378 through 30 games and has particularly struggled since an 11-day disabled list stint caused by a left intercostal strain, producing just a .130/.176/.370 line with 23 strikeouts in the 13 games since his return. Travis's performance Monday, which included his fourth homer of the season, was his first multi-hit game since April 20. Should anything happen to Moreland, Travis would be in competition with Blake Swihart and Brock Holt to take over first-base duties for Boston.

Michael Kopech vs. Kevin Newman: It's not top-100 vs. top-100 or power vs. power, but Monday's matchup between Kopech and Newman pitted a K-heavy top prospect with one who rarely gets punched out. Kopech ranks second in the International League with a 31.2 percent strikeout rate while Newman's 11.6 percent K rate is third-lowest among IL hitters. Kopech fanned seven Indianapolis batters over his six innings in Charlotte's 7-5 win, and none of them were Newman. The Pirates' No. 7 prospect, who is hitting .318 on the season, lined out to second base in the first inning, bounced back to Kopech in the third and lined out to center in the fifth. Kopech finished with a quality start, having allowed two earned runs on three hits and two walks in his six frames, while Newman went 1-for-5.

D-backs RHP Taylor Clarke, Triple-A Reno: 5 IP, 3 H, 0 R, 2 BB, 5 K, 90 pitches, 57 strikes -- The D-backs' No. 7 prospect featured in this same spot six days ago after his last start, but he finished the month on an even brighter note. Clarke went 5-1 with a 2.08 ERA, 1.04 WHIP and 40 strikeouts over six starts (34 2/3 innings) this month. Not much has changed about Arizona's Major League situation since the last update. The D-backs continue to use Clay Buchholz as their No. 5 starter, and the veteran right-hander has allowed just two earned runs in 11 innings. As good as Clarke has been, he'll need to keep this momentum going into June to elbow someone out of the Arizona rotation.