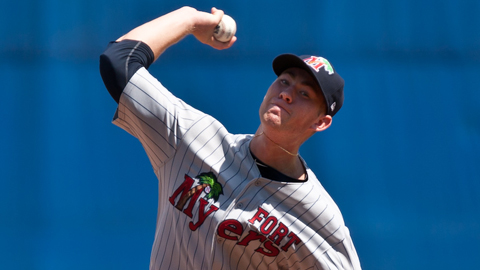 Alex Wimmers pitched a nine-inning no-hitter at Ohio State in May 2009. (Scott Jontes/MiLB.com)

Alex Wimmers had one thought when Jupiter slugger Jeff Dominguez sent his last pitch high in the air toward right field.

While the ball fell short, Wimmers did anything but on Saturday night. The Twins' 2010 first-round pick pitched a seven-inning no-hitter as the Class A Advanced Fort Myers Miracle blanked the Hammerheads, 1-0, to complete a doubleheader sweep.

Minnesota's No. 10 prospect struck out five and walked two but, thanks to his defense, faced the minimum 21 batters.

Dominguez was the last, but he made for one entertaining end. He lifted a first-pitch changeup that stalled in the center of the strike zone.

"Some way or another, that ball stopped -- a foot from going out," said Wimmers, who thought Dominguez would not be swinging at his first offering, No. 92 on the night. "I sat down out there on the mound. I was more shocked than anything."

With the ball landing in the glove of leaping teammate Oswaldo Arcia, Wimmers became the first Miracle pitcher to toss a no-no since June 30, 2007, when Yohan Pino shut down St. Lucie for seven frames. He also became the ninth Minor Leaguer this year to register a complete-game no-hitter. On Aug. 8, Palm Beach's Tyler Lyons no-hit the Miracle.

It also was the first complete game and shutout of Wimmers' brief career. In his third outing as a pro for Fort Myers on Aug. 31, 2010, he registered five no-hit innings against Palm Beach.

The 22-year-old right-hander pitched a nine-inning no-hitter at Ohio State on May 2, 2009 -- about a year before the Twins made him the 21st overall pick in the Draft.

"The one I had in college, it was against Michigan, big rivalry there," he said. "I have to say the Ohio State game was the best one I have ever been a part of."

That's not to say his first no-no as a pro was less than special. Wimmers' father had flown in from the family's home in Cincinnati to see his son's final outing of the summer. Rapid rewards.

"He's always been my No. 1 fan, my biggest supporter," said Wimmers, who tossed the game ball to his dad in the stands at Roger Dean Stadium. "He wanted to see my last start, wouldn't miss it for the world."

Buckeye experience in tow, Wimmers said he felt little pressure to keep zeros on the scoreboard.

Wimmers retired the first nine Hammerheads before walking Dallas Poulk to start the fourth. Poulk was doubled off second base when Dominguez grounded out to shortstop James Beresford, who made a nifty play.

The only other batter to reach, Gregg Glime, also walked and was promptly caught stealing second by backstop Danny Rams.

"There was a bunch of great plays tonight," Wimmers said. "Couldn't have done it without 'em."

After 16 outings, including four starts, Wimmers (2-3) completed his campaign with a 4.20 ERA, the lowest it's been since his season debut on April 11. In that game, he surrendered four runs on six walks -- and no hits -- without recording an out against St. Lucie.

"I am a different pitcher now than I was then," he said. "Finishing up strong is awesome -- it's a huge confidence-boost. From where I have come, I am pretty happy about it."

The Miracle also started the day with a complete-game performance. In the opener, a 7-0 win, Edgar Ibarra (5-10) tossed a five-hit shutout and fanned six.