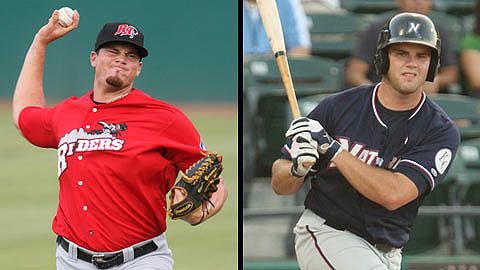 Six of the seven pitching slots went to South Division teams, with Frisco, San Antonio and Corpus Christi taking two apiece and one going to Springfield. The North Division dominated the position player slots, taking 10 of 12, with five going to the Naturals and two to the Cardinals.

At third base, Player of the Year choice Mike Moustakas (now with Triple-A Omaha) leads the Northwest Arkansas quintet. With the exception of Arkansas' Andrew Romine at shortstop, the Naturals make up the rest of the infield.

First baseman Clint Robinson was leading the league in home runs (27), RBIs (89), doubles (37) and slugging percentage (.607), and he was among the top three players in other offensive categories. Second baseman Johnny Giavotella was topping the circuit in hits (157) and tied for the lead in runs (84), while making top-five appearances in doubles (30) and batting average (.319). Moustakas held onto the fifth spot in RBIs and his .347 average would have been the best if it still qualified.

Romine's 13 sacrifice hits were tied for the most in the league. Utility player Josh Horton of Midland owned the circuit's second-best ratio of strikeouts to plate appearances at 9.30.

The Naturals also claimed two of the four outfield spots. Paulo Orlando stood third in runs scored (79) and Derrick Robinson first in stolen bases (50) and tied for second in triples (eight). Midland's Corey Brown, who was tied for second in average (.321) and triples (eight), had the third best on-base percentage in the league (.415), and Jeremy Moore of Arkansas, led the circuit in triples (10) and was fourth in hits (135) and stolen bases (24) rounded out the outfield.

Two catchers were named -- Springfield's Steven Hill, who ranked second in slugging percentage (.543), third in RBIs (86) and fourth in home runs (22) and Wilin Rosario of Tulsa, hitting .285 with 52 RBIs and 19 homers and an .894 OPS. Another Springfield slugger, Matt Carpenter got the designated hitter nod after leading the league in average (.326), while ranking fourth in slugging (.509) and fifth in runs (76).

Springfield was the only team to be represented with position players and a pitcher as David Kopp, second in wins (12) and tied for first in winning percentage (.750) nabbed a spot.

Three teams each placed a pair of pitchers on the squad. From Frisco, Ryan Tatusko was joined by the league's Pitcher of the Year, Blake Beavan (now with Triple-A Tacoma), who owned the best WHIP (1.02) and second-best ERA (2.78) in the circuit. San Antonio's contributions were Simon Castro, second in WHIP (1.10) and batting average against (.223) and third in ERA (2.92), along with Jeremy Hefner, with top-five numbers in numerous stats. Corpus Christi contributed ERA leader (2.55) Douglas Arguello and Jordan Lyles, who was third in strikeouts (115) and fifth in ERA (3.12).

Brian Poldberg of Northwest Arkansas was named Manager of the Year. And the Mike Coolbaugh Texas League Coach of the Year Award went to Webster Garrison of Midland.

The distinct division between batting excellence in the North Division and pitching prowess in the South could signal a pitching vs. hitting showdown in the playoffs.

Although if San Antonio, with the league's best team ERA (3.37) and most strikeouts (1,023) can't get by Midland for the South Division second-half title, the bats in the North Division could romp through the postseason play. Northwest Arkansas' lead in team batting average was nearly 20 points ahead of second-place Springfield, and the Naturals also led in runs, RBIs, slugging and on-base percentage, trailed in each category by the Cardinals.

Rob Kuhn is a contributor to MLB.com. This story was not subject to the approval of the National Association of Professional Baseball Leagues or its clubs.