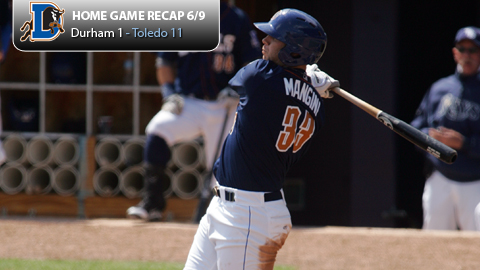 Durham, NC - After getting swept by Scranton/Wilkes-Barre, the Bulls welcomed a new opponent to the DBAP on Saturday night. Durham fared no better against Toledo though, as the Mud Hens routed the Bulls 11-1 in the series opener. Top Tigers prospect Jacob Turner scattered eight hits but easily kept the Bulls offense in check, while the Hens hit three homers to win in a walk.

The story of the homestand remained the same, as the Bulls were in an early hole against Toledo. Jeff Frazier hit his first home run of the season, a solo shot over the Blue Monster, in the second inning to put the Mud Hens on the board. Shane Dyer (1-2, 6.85) came back with a perfect third inning, but it fell apart for the 24 year old in the following frame. He allowed a three-run home run to Ben Guez, putting the Bulls down 4-0. With the bases clear, Dyer could not record the final out of the inning. He allowed the next six batters to get on and two more runs to score until he was replaced by Jhonny Nunez.

Turner (1-1, 3.75), the number one prospect in the Tigers system, was dominant on the night. The 9th overall pick in the 2009 draft tossed 6 2/3 innings, allowing an earned run on eight hits, while walking and striking out two. Durham avoided the shutout with a late run against Turner. Matt Mangini singled in the seventh and was brought home thanks to an RBI single by Cole Figueroa. Turner left the game with runners on the corners and two outs, replaced the lefty Darin Downs. Downs promptly fielded a ground ball from the first batter he faced to retire the side and strand two.

The Bulls lone run would barely make a dent in the score. The following inning, first baseman Ryan Strieby hit a three run shot off of Josh Lueke. An RBI double three batters later put the Mud Hens up 10-1. Every player in the Mud Hens lineup had a hit. Cather Craig Albernaz came on for the Bulls to close the game for the second time this week. He made his 9th career pitching appearance, allowing a run on two hits.

The Bulls and Mud Hens are back at it tomorrow evening with a 5:05pm start. RHP Brooks Brown is set to take the hill for Toledo against a Bulls starter that has yet to be announced. Following the game, kids are invited to run the bases courtesy of Pepsi.