No. 4 overall prospect batting .375 to date in Grapefruit League 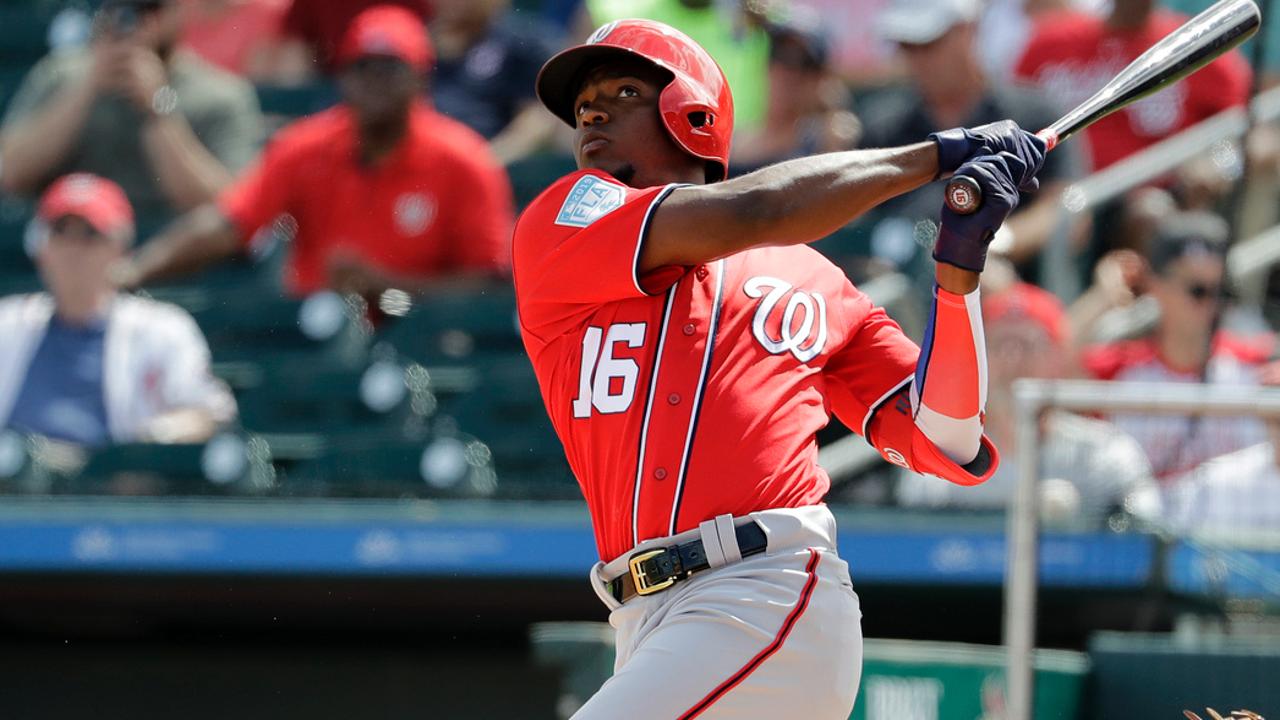 Victor Robles isn't letting up in his quest to earn an outfield job by Opening Day.

The top Nationals prospect went 2-for-4 with a long home run to help Washington past Minnesota, 10-4, in Fort Myers on Thursday. Robles slugged his second homer of the spring in the second inning, knocking home Spencer Kieboom as Washington took a 5-0 lead. MLB.com's No. 4 overall prospect, who is batting .375 in Spring Training, began the game with a line-drive single to center field and scored on Jake Noll's two-run double.

Tweet from @MiLB: Victor Robles might not be known for his power, but when you're the No. 4 overall prospect, the pop finds you. pic.twitter.com/YOfgajfnyF

Robles went 1-for-2 with a pair of walks, a run and two stolen bases Wednesday and could be in line to take the Nats' primary center-field job. He's expected to shift to right at times -- as he did Thursday -- when Michael Taylor gets penciled in at center.

"We've got four really good outfielders," Nationals manager Dave Martinez told MLB.com on Tuesday. "I think they're all going to play. Victor's going to play because he's young and we've actually got to see what he can do. But Michael's just as important as anyone, and I want to get him playing time."

Tanner Rainey, Washington's No. 19 prospect, allowed a run on two hits in one inning and No. 30 Kyle McGowin worked around two walks in one frame.

Twins No. 5 prospect Trevor Larnach went 1-for-2 with a solo homer.

In other spring action:

Estevan Florial went 1-for-3 with a walk and Bo Bichette doubled and walked as New York and Toronto tied in Dunedin. Florial, the Yankees' top prospect, played the entire game in center field and got his only hit in the seventh on a ball he hit back at Jays pitcherElvis Luciano. The outfielder is batting .345 this spring. Bichette, Toronto's No. 2 prospect, bumped his average up to .406 with the hit. No. 28 Luciano pitched around a pair of hits in 1 2/3 innings. Box score

Top New York prospect Pete Alonso went 1-for-3, dropping his spring average to .368. His main competition for the Mets' first-base job, Dominic Smith, is hitting .433/.500/.600 after getting the day off. Box score

Two-way Tampa Bay player Brendan McKay -- baseball's No. 29 prospect -- made the most of his first plate appearance of the spring. The Louisville product, who moonlights as a designated hitter when not pitching, delivered a pinch-hit single off Philly's Yacksel Rios in the seventh. Lefty Colin Poche, the Rays' No. 18 prospect, took the loss after yielding one run -- a solo shot by Phillies slugger Dylan Cozens -- on one hit over 1 1/3 innings. Box score

Fourth-ranked Baltimore prospect Austin Hays hit an RBI double to left in the fourth and walked and scored a run in the sixth. No. 22 Branden Kline suffered his second loss of the spring after allowing the go-ahead run on a single by Jacob Pearson in the ninth. He allowed two hits and struck out one in one inning. Box score

C.J. Chatham lined an opposite-field RBI single in the fifth. Boston's ninth-ranked prospect finished 1-for-3 and is batting .292 this spring. Right-hander Durbin Feltman (No. 12) walked one and struck out two during one inning out of the bullpen. Box score

Pittsburgh's No. 9 prospect Kevin Newman enjoyed a big day at the dish, going 3-for-4 with three RBIs, two runs and a stolen base. In the fourth, the 25-year-old ripped a run-scoring double to center and scored on a two-bagger by Starling Marte. The next inning he singled to right, but was thrown out by Aaron Altherr while trying to stretch it into a double. Newman cracked a two-run homer to left off Edubray Ramos in the seventh. Pirates No. 24 prospect Nick Burdi retired the side in order with a pair of punchouts in the seventh. Box score

Third-ranked Houston prospect Yordan Alvarez went 1-for-4 with two strikeouts. No. 16 Myles Straw singled once in two at-bats while 15th-ranked Brandon Bielak allowed two hits and struck out in two scoreless innings out of the bullpen. Marlins No. 20 prospect Riley Ferrell walked one and struck out two in a hitless eighth. Box score

Top Los Angeles prospect Alex Verdugo turned in a 1-for-3 day with a single and a walk, while sixth-ranked Will Smith went 2-for-4, including a two-out RBI single in the sixth. Verdugo -- ranked as No. 35 overall and No. 7 as an outfielder -- has a slash line of .286/.300/.693 in Cactus League action this spring. Eighth-ranked Jeter Downs picked up his first two hits of the spring, going 2-for-4 with a double. Cincinnati's No. 14 prospect Stuart Fairchild delivered a pinch-hit single for his first hit of the spring. Box score

Cleveland took a no-hit bid into the seventh, but Daniel Johnson grabbed a little of the spotlight. The Indians' No. 22 prospect slugged a grand slam in the sixth. Eric Haase (No. 29) pinch ran for Hanley Ramirez and came around to score. Top Rockies prospect (and No. 10 overall) Brendan Rodgers went 0-for-3 with a strikeout. Box score

Chicago's No. 25 prospect Duane Underwood Jr. worked around a hit with a strikeout in a scoreless seventh. Rangers No. 16 prospect Eli White knocked a single, later stealing a base. Box score

San Francisco's No. 30 prospect Travis Bergen tossed 1 1/3 hitless innings. The Rule 5 pick has yet to allow a run this spring across seven frames. Box score

Texas' No. 25 prospect Jose Trevino picked up his first hit in 14 at-bats this spring. C.D. Pelham (No. 15) retired the only batter he faced. Kansas City's No. 8 prospect Nicky Lopez got another hit, raising his average to .324, and stole his fourth base. Box score

Milwaukee's top prospect Keston Hiura, No. 20 overall, turned in an 0-for-2 day at the plate and 16th-ranked Jacob Nottingham's average dipped to .143 after going 0-for-2 with a strikeout. No. 30 Trent Grisham turned in a 2-for-2 day at the plate with a double and a walk. Angels' No. 26 prospect Jake Jewell was tagged for a solo shot by Mike Moustakas and allowed two hits over 1 1/3 innings. Box score

Third-ranked Los Angeles prospect Dustin May allowed one hit and struck out three over three innings. He's thrown six scoreless frames this spring, fanning five. After going 1-for-5, Omar Estevez is batting .292. Jeren Kendall (No. 16) drew a walk in the eighth. Box score