Alonso busts out of skid in big way 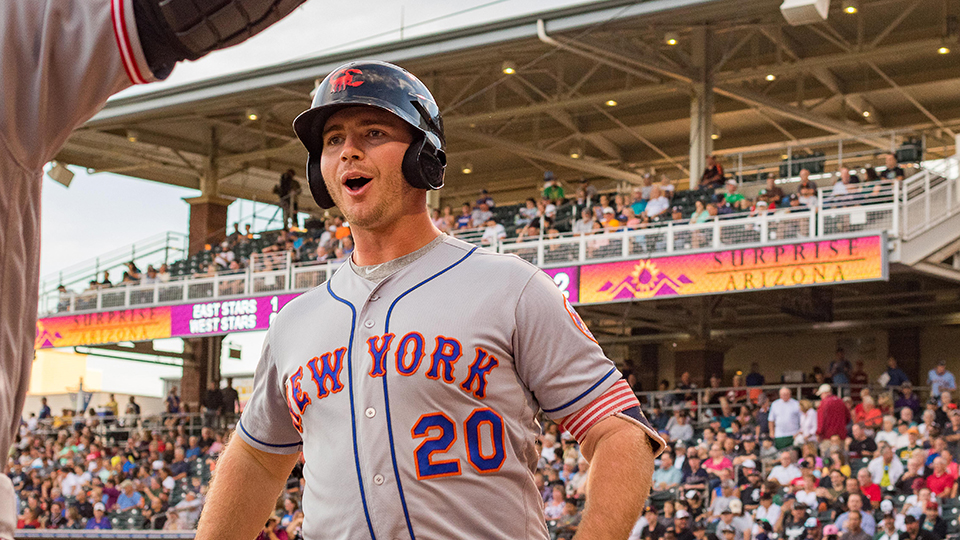 Peter Alonso is tied for the league lead in homers with six and stands second with 27 RBIs. (Freek Bouw/Phrake Photography)

As the Arizona Fall League winds down, Peter Alonso is determined to finish on a high note.

The second-ranked Mets prospect broke out of a 5-for-42 slump with a huge night Wednesday, ripping a home run, two doubles and a single while driving in six runs to key Scottsdale's 10-3 victory over Peoria at Scottsdale Stadium.

Alonso's homer was his sixth, tying him for the AFL lead with Peoria's Braxton Davidson (Braves), who went 0-for-4 on Wednesday. Alonso's 27 RBIs rank second behind top Brewers prospect Keston Hiura, who has 33 RBIs after belting his fifth homer for Peoria.

Houston No. 24 prospect Trent Thornton allowed just one hit in 2 1/3 innings in relief of eighth-ranked Astros prospect J.B. Bukauskas, who gave up three runs on five hits -- including two homers -- in 3 2/3 innings, but picked up the win to improve to 2-1.

Brewers No. 19 prospect Trent Grisham went deep against Bukauskas. Austin Allen, the 25th-ranked Padres prospect, singled twice and crossed the plate once for Peoria. Rays right-hander Brandon Lawson (2-2) was tagged for four runs on six hits in one inning.

Bobby Dalbec reached base in all five of his plate appearances to lead Mesa. Boston's sixth-ranked prospect doubled, singled, walked twice, was hit by a pitch, scored a run and drove in another. Fourth-ranked Angels prospect Jahmai Jones cracked a solo home run and Roberto Baldoquin (Angels) added a two-run shot. Red Sox No. 9 prospect Mike Shawaryn struck out four in two innings of scoreless relief. Pirates No. 5 prospect Cole Tucker continued his successful AFL campaign with Surprise. The 2014 first-round pick went 3-for-4 with a walk and scored once. Ninth-ranked Blue Jays prospect Cavan Biggio doubled in a run and walked for the Saguaros. Gameday box score

Minnesota's No. 18 prospect Travis Blankenhorn reached four times out of the leadoff spot with three singles and a walk, scoring a run as Salt River clinched the East Division. The AFL's likely 2018 batting champion, Nevin added a pinch-hit RBI single in his lone at-bat of the day, boosting his average to .426 in 17 games. Rockies teammate Ryan Castellani (No. 10 in the organization) allowed one run on two hits and three walks while striking out seven over five innings, but didn't factor into the decision for the Rafters. Gameday box score