No. 13 prospect fanned 14 in 12 innings for Class A Charleston 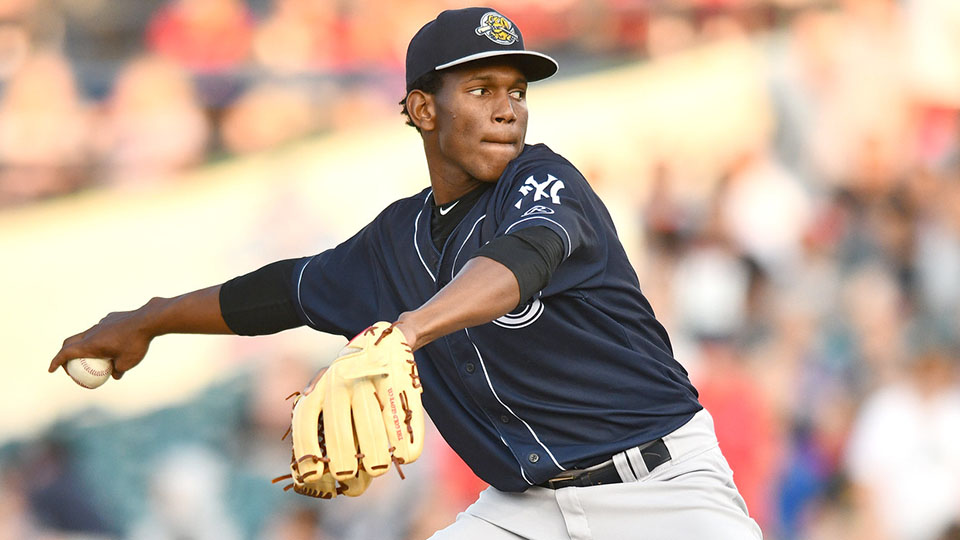 Roansy Contreras was the dictionary definition -- well, the baseball definition anyway -- of "quality" in the second half of the 2019 season. Now, he has more than just a sinking ERA to show for it.

The Yankees' No. 13 prospect struck out 14 and allowed only one earned run in 12 innings over two starts last week for Class A Charleston to headline the final group of Minor League Pitchers of the Week for 2019. The South Atlantic League honor is the first for Contreras since signing out of the Dominican Republic in July 2016.

The 19-year-old right-hander got his award-winning week going by allowing one earned run on four hits and two walks while fanning six over six innings on Aug. 26 at Asheville. He followed that up with arguably his best start of the season on Sunday. Contreras allowed just one hit and one walk while striking out eight over six scoreless frames against Greenville. In a notable feat of consistency, the RiverDogs starter threw 87 pitches in both outings -- 54 for strikes in the first, 56 for strikes in the second.

"He was on a mission today. He knew he wanted to win his 12th game of the season," Charleston manager Julio Mosquera told MiLB.com's Dan Stokes after Contreras' last start. "He went out there to compete. I know it's late in the season and some guys want to go out there and get it over with, but he went out there and competed and gave his team a chance to win. We [coaches] saw his poise out there because he's been really focused on accomplishing that goal."

These were just the latest in a string of solid outings for the six-foot hurler. Including his two gems last week, Contreras ended his season by tossing six innings or more in nine of his final 10 outings. All nine of those appearances met the threshold for a quality start -- at least six innings, no more than three earned runs -- and even the start that didn't was solid by any other standard (five innings, one earned run against Lexington on July 18). Over that 10-start span that began July 5, Contreras posted a 1.80 ERA and 0.75 WHIP with 55 strikeouts and only 13 walks in 60 innings.

As a result, the rigthy's ERA dropped to 4.60 to a season-ending 3.33, fifth-best among South Atlantic League qualifiers. Contreras also finished among the league leaders in WHIP (1.07, first), average-against (.212, second) and innings pitched (132 1/3, fourth).

Signed for $250,000 three years ago, Contreras has made a steady climb toward the Bronx during his time in pro ball. Though relatively diminutive for his position, he's earned plaudits for his plus fastball that is capable of reaching the mid-to-upper-90s. His curveball is also considered an above-average pitch, and his average changeup may help him stick as a starter. His ability to further develop those secondary offerings could determine just how much he's able to replicate this recent run of success in 2020 and beyond.

"He's been more aggressive in the strike zone and attacking hitters a lot better and started throwing better pitches," Mosquera said. "His mentality has changed. He said he wanted to attack hitters, and it's shown.

"We know he has the fastball, but he's been throwing his breaking ball and changeup more consistently. He was more of a fastball guy trying to get his breaking stuff going until he found out he was more comfortable utilizing those pitches in different counts."

Below is the complete list of Minor League Pitchers of the Week for Aug. 26-Sept. 2: