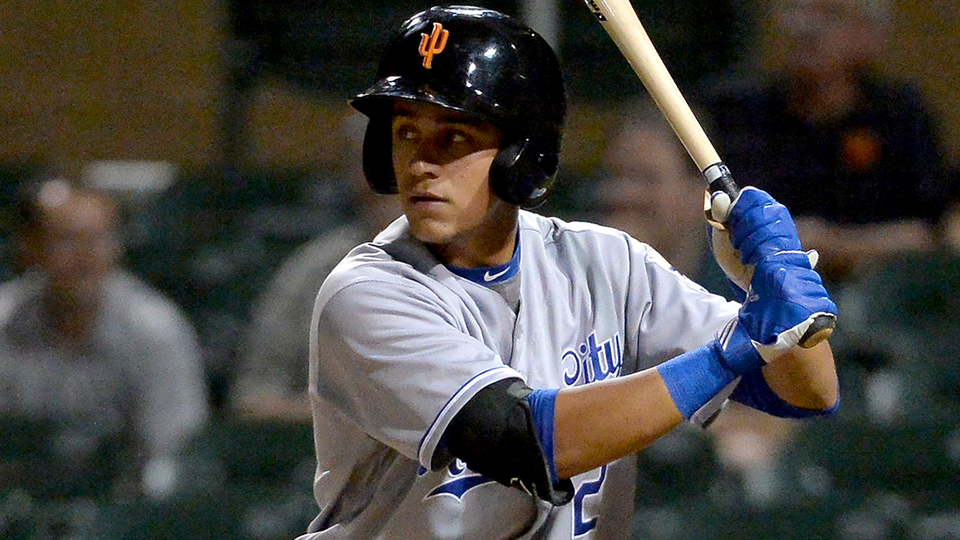 Nicky Lopez is tied for second in the Arizona Fall League with 44 total bases through 18 games. (Jennifer Stewart/MLB Photos)

With the Arizona Fall League season ending Saturday, there are only a few days left for players to make an impact. Just under the wire, two notable prospects made sure they won't enter the offseason empty-handed.

The league announced Tuesday that Royals No. 11 prospect Nicky Lopez and Marlins right-hander James Needy have been named the AFL Player and Pitcher of the Week, respectively, for the week of Nov. 6-11.

Lopez went 7-for-17 (.412) with two homers, six RBIs, four runs scored and a stolen base over four games for Surprise last week. The 22-year-old shortstop has hits in each of his last eight games and multiple hits in six of those contests. His two home runs -- a leadoff shot last Tuesday against Glendale and a grand slam on Saturday against Peoria -- equaled his total output during the regular season, when he played 129 games between Class A Advanced Wilmington and Double-A Northwest Arkansas.

The 2016 fifth-round pick out of Creighton has collected the most hits in the Fall League this season with 29 in 18 games. He also ranks second with a .392 batting average, tied for second with 44 total bases and fourth with a .444 on-base percentage and 1.039 OPS.

As featured in last Friday's Toolshed, Lopez has opportunity to prove himself in the AFL entering what should be Kansas City's most interesting offseason in recent memory. The Royals have multiple players hitting free agency, including Alcides Escobar, whose potential departure could result in an opening for Lopez. Though he hit just .259/.312/.293 in 59 games at Double-A, the left-handed hitter credited closing his stance and using a heavier bat with his offensive turnaround in the Fall League.

"Being able to showcase my skills anywhere is a good thing," Lopez told MiLB.com. "I am the player I am, and I know the Royals have a plan for me. All I can do is put faith in that my best effort will keep working. If that's enough, that's enough. I want to show I'm capable, and I'll keep putting in the work to prove that."

Needy required just one dominant start to pick up his award on the mound. The 26-year-old right-hander struck out an AFL-high nine over four scoreless innings while scattering two hits and a walk for Salt River in a 3-2 win over Scottsdale last Tuesday. That was Needy's second straight scoreless four-inning start, and he now owns a 4.26 ERA with 14 punchouts and five walks over 12 2/3 innings. Five of his six earned runs came in his Oct. 27 outing.

The 2009 sixth-rounder is getting a second life in Arizona. Needy spent seven years in the Padres system before electing free agency in Nov. 2015. Tommy John surgery knocked him out for all of 2016, and the right-hander began 2017 in the independent American Association before signing with the Marlins on June 1. He made seven starts for Class A Advanced Jupiter, posting a 1.73 ERA with 33 strikeouts in 36 1/3 frames, but missed a month due to a sprained right finger. He also made two starts with Double-A Jacksonville before being sent to the Fall League for more work.