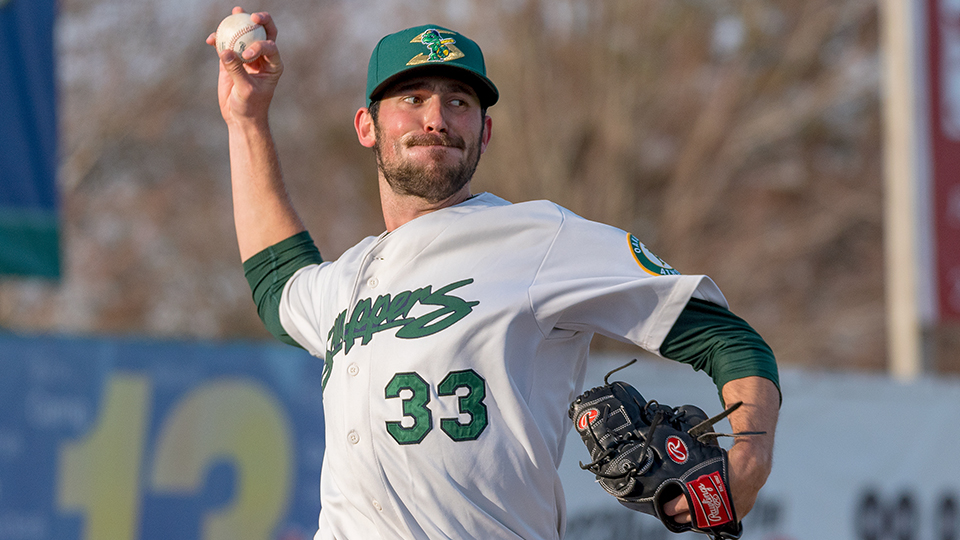 Bryce Conley has allowed two earned runs or fewer in four of his six outings this season. (Justin Nuoffer/MiLB.com)

It was a situation Bryce Conley has encountered before for Class A Beloit.

The A's prospect threw six hitless innings on Saturday night, striking out four and walking two, as the Snappers cruised to a 10-1 triumph over Fort Wayne at Pohlman Field.

"I had all my pitches working," Conley said. "I was really on the same page as my catcher, Skyler Weber, all night tonight. So I think that we got off to a good start and kept it rolling."

The 24-year-old right-hander threw 53 of 87 pitches for strikes and didn't allow a baserunner after the fourth, retiring the final eight TinCaps he faced. Conley said he realized he hadn't allowed any hits through three innings and was ready to go longer than six, if needed.

"Excited to get out there and go in the seventh and then you get a handshake from your coach saying that's it," he said. "Not a whole lot you can do about it other than wish you could be out there, but I respect the decision that they made."

Grant Little broke up the no-hit bid by lining a single to right field leading off the seventh against reliever Angello Infante.

Conley (1-3) also threw six no-hit frames on April 12, 2018 against Burlington, when he and two Snappers relievers combined on the sixth no-hiter in franchise history. In that game, the 2017 22nd-round pick fanned four and walked one in a performance eerily similar to his start on Saturday.

"That is crazy," Conley said with a chuckle. "Maybe one day I'll get to go all nine and throw a no-hitter on my own, but I'll take it for tonight."

With his first scoreless start of the season, the Georgia State product lowered his ERA to 3.54 over 28 innings. He has 22 strikeouts against 16 walks.

"I'm just trying to work every day, getting that command," Conley said. "I think my golden ticket to moving up in this organization is finding that command and being consistent."

A's No. 16 prospect Marcos Brito made a couple of stellar defensive plays behind Conley at shortstop and went 2-for-4 with a double and a run scored.

"The one that stuck out the most was he had a backhand kind of in between third and short," Conley said, "and he came up with it and thankfully, we had a catcher running down to first, so he had a little time and slung it over there. It was a really nice play."

Making his second appearance of the season, Infante gave up a run on three hits over the final three innings for his first save since Aug. 16, 2016 in the Rookie-level Dominican Summer League. He struck out a pair.

Payton Squier collected three hits, including a double, and scored a run for the Snappers. Noah Vaughan tripled, singled, drove in a pair and scored twice.