Padres No. 17 prospect drives in five on two-homer night 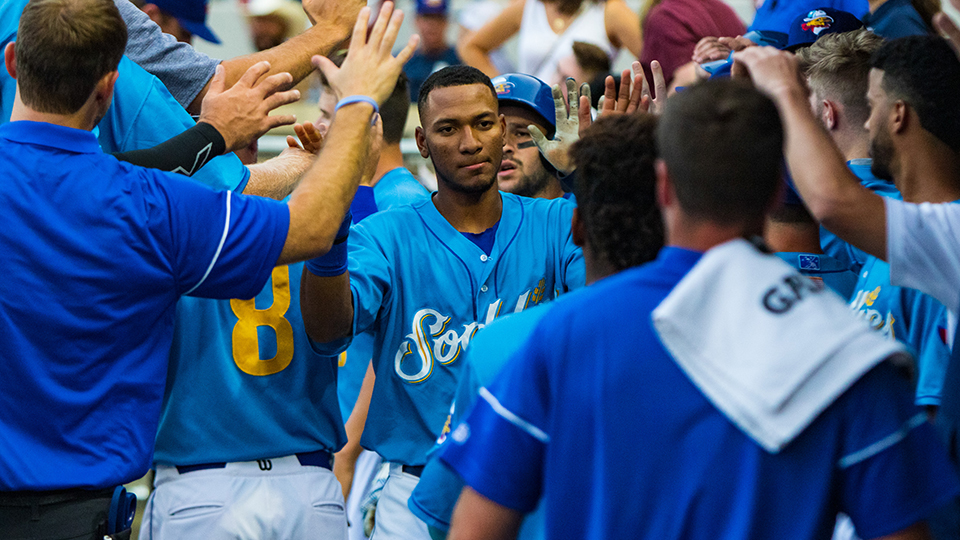 Edward Olivares got MacKenzie Gore off the hook and sparked another comeback for Double-A Amarillo.

The Padres' No. 17 prospect went 3-for-4 with a pair of homers and five RBIs as the Sod Poodles erased an early seven-run deficit and defeated Northwest Arkansas, 12-8, on Friday night at Hodgetown.

After popping out to third in his first at-bat and getting plunked by J.C. Cloney in the fourth inning, Olivares began his late-game heroics.

The 23-year-old cranked his 14th long ball of the season, a solo shot off Cloney in the sixth. He forged an 8-8 tie an inning later with a soft single to left field that scored Ivan Castillo.

In the eighth, Olivares cranked his second homer of the game, a three-run jack to left off right-hander Conner Greene (3-8). Padres No. 11 prospect Buddy Reed and Castillo scored on his 15th tater of the season.

"I felt good at the plate but I didn't try to do too much," Olivares told the Amarillo Globe-News. "I don't think about hitting a home run, it just happens."

Olivares and right-hander Jared Carkuff were acquired Jan. 6 in a trade with the Blue Jays for second baseman Yangervis Solarte. The Venezuela native, who recorded the first three-homer game in Amarillo history on May 5, extended his hitting streak to seven games and boosted his average to .301. In July, the Texas League midseason All-Star owns a .379/.419/1.070 slash line with four homers and 15 RBIs in 17 games.

The Sod Poodles crawled back from a six-run deficit against Springfield on Thursday, only to lose on a home run in the ninth.

"Another test of our character, only this time we won," Sod Poodles manager Phillip Wellman told the newspaper. "I think something good always comes from these tests. We're leading the league in offense, so we always feel like we have a chance."

Gore, MLB.com's No. 3 overall prospect, set career highs by surrendering seven runs on nine hits over four innings. The 20-year-old lefty struck out four and walked one. After going 7-1 with a 1.02 ERA in 15 California League starts, he's 1-0 with a 6.75 ERA in two starts for the Sod Poodles.

"He never could find his command the way he did in Frisco," Wellman told the newspaper. "He's special, but it was just one of those days."