On the Road: Albuquerque's music man

From clubhouse to walk-up, Fuentes curates the 'Topes' tunes 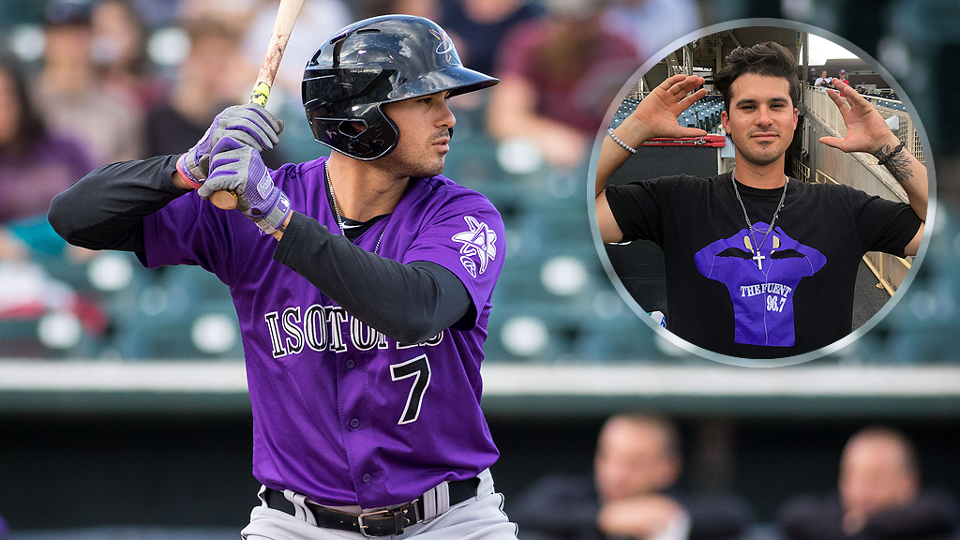 Josh Fuentes is a third baseman, but he plays another key position that will never appear on a stat sheet or box score: clubhouse DJ.

In 2018, during his breakout season as a member of the Triple-A Albuquerque Isotopes, Fuentes honed a persona that has since been immortalized via celebratory on-field gestures, fictional radio stations and official T-shirts. He's DJ Fuent, broadcasting live in the clubhouse over a frequency known as 96.7 The Fuent. This station might not be accessible via your FM dial, but it's real to Fuentes and his Isotope teammates.

"Yeah, so, obviously I grew up on music. I always had headphones, had a CD player or something like that," said Fuentes, currently on the disabled list with an oblique injury. "And for some reason, I always knew lyrics. I couldn't tell you a grammar test, or anything in school. I always forgot everything. But when it came to music, it was like I just fell in love with the lyrics. I used to listen to '80s music. When I was younger, my mom used to listen to '80s music. Just growing up, I was a rhythm guy. So if it had rhythm, I loved it."

When Fuentes was signed by the Rockies in 2014 as an undrafted free agent, he was best known as Nolan Arenado's cousin. He's since carved out his own identity, winning the Pacific Coast League MVP Award in 2018 and making his Major League debut earlier this season (collecting two hits over 18 at-bats). Fuentes has been in tune, on the field and off.

"So I came here [to Albuquerque]. My locker's right next to the stereo and I just started playing music," he said. "And I started playing old-school songs. Some Michael Jackson, the Rolling Stones, whatever you can think of. So I just started playing more, and more and more. Throughout the day I started messing around, and right before I get on the stereo saying, 'Alright, now we got 96.7 The Fuent! Coming at you live!' And I do the whole spiel, the whole DJ spiel. So everyone loved it so much they made shirts."

The shirts were the brainchild of pitcher Zac Rosscup, now pitching in the Dodgers organization. Rosscup designed the shirt after taking a picture of Fuentes doing his "doubles sign" -- a celebratory gesture from second base in which he mimes putting on a pair of headphones.

"Put it on a shirt, gave it out, it was amazing. So everyone just started calling me DJ Fuent," Fuentes said. "And then this year, I come in to camp or come into the clubhouse, everyone's asking me for walk-up songs. 'Hey! Give me a walk-up song, give me a walk-up song!' So I was like, 'Dang! I'm really this DJ!' So I had more shirts made. I passed them out. And pretty much every day, 30 minutes before the game, I'm on [the stereo] making a fool out of myself. But the guys seem to like it, and I give the playlist to [Isotopes broadcaster Josh] Suchon up there to play. Everyone, even some of the people who work here, they call me DJ Fuent. I love music and just having fun with it."

Walk-up songs are often personally meaningful. When Fuentes' teammates ask him to select a walk-up song, he takes the task seriously.

"I kind of figured out what people like," he said. "So, obviously, [Isotopes first baseman] Brian Mundell's not going to be listening to [hip-hop artist] Travis Scott. He likes rock. ... I mean, it's not everybody. But they'll come up to me for suggestions and I kind of roll with it. ... Honestly, I try to judge it by how the fans will think about it. Because if they remember the song, they remember the player. That's what I think it is."

Fuentes has put together a wide variety of Spotify playlists, such as "Rock Jams" for batting practice and "Rap Jams" for the clubhouse. It's a balancing act, having to cater to a diverse group of players with wildly different backgrounds and, thus, wildly varying tastes.

"When you play a certain genre, you definitely get some kickback," he said. "'Oh, this is terrible!' 'Oh, we love this song!' So you can't make everybody happy, but I try. ... Lately it's been, I guess you call it EDM, all the house stuff. I hadn't been too much into that but then [catcher Drew Butera] is really big into that. He was giving me suggestions and I'll mix it in a bit, just to keep him happy. But I know almost every genre because people listen to every genre. When I'm picking the songs, I've got to know my audience and I've got to make sure it's good."

No matter where his career takes him, Fuentes expects 96.7 The Fuent to be a part of it.

"Oh, yeah. DJ Fuent, it's definitely something," he said. "It gets me more ready for the game and it gets me more in-tune with my teammates, and I think that's the biggest part. When you're trying to play, and it's such a long season, you want to see your guys pumped up every day. And for a lot of guys, music is that thing."