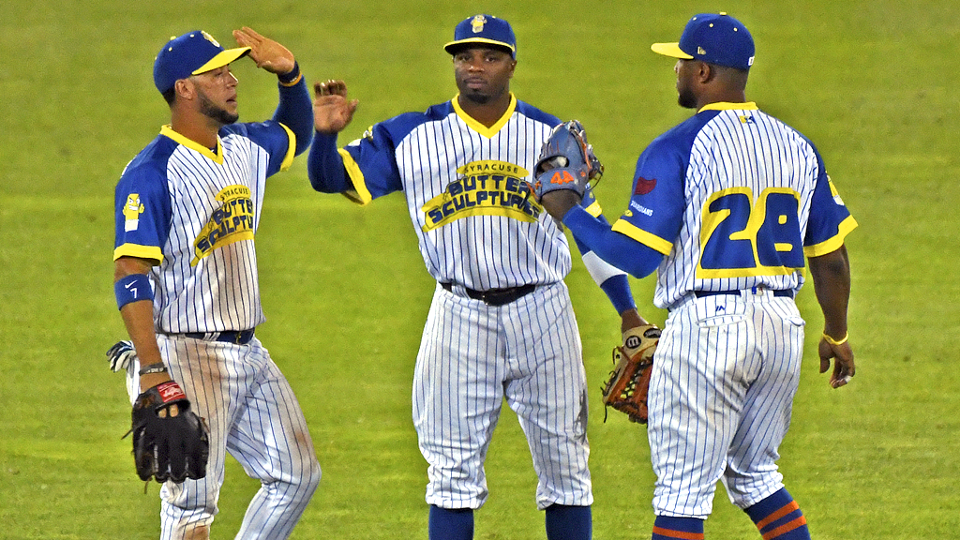 On Saturday, the Syracuse Mets played a game as the Butter Sculptures. Why? According to general manager Jason Smorol, it was because "people just love their local stuff."

Butter Sculptures is a nod to the New York State Fair, a massive 13-day celebration of all things Empire State. The New York State Fairgrounds are located in Syracuse, in close proximity to the Mets' home of NBT Bank Stadium. This year's iteration takes place from Aug. 21-Sept. 2.

One of the New York State Fair's many attractions is a massive butter sculpture, housed in the Dairy Products Building. The first such sculpture was created in 1969, celebrating that year's moon landing by depicting a cow jumping over the moon. Last year's sculpture, entitled "Your Milk Comes From a Good Place," showed a dairy farmer delivering milk to a store. The sculpture, which required 800 pounds of butter, was created by the husband and wife team of Marie Pelton and Jim Victor. This marked the 17th consecutive year in which Pelton and Victor created the fair's butter sculpture.

Butter Sculptures is the latest in a line of Syracuse Mets' alternate identities celebrating central New York. In 2017 the team, then known as the Chiefs, celebrated a revered local delicacy by suiting up as the Salt Potatoes. (The Salt Potatoes will make their 2019 return from Aug. 23-25, coinciding with the opening weekend of the New York State Fair.) Last season, the team took the field as the Devices in honor of the iconic, locally-invented foot-measuring tool that is the Brannock Device. Heading into the 2019 season -- their first as the Mets, who also own the franchise -- Smorol and his staff began brainstorming a new, regionally-specific alternate identity.

Initial conversations with New York State Fair representatives led to the name of Syracuse Fairgoers. Danny Tripodi, Mets manager of social media and graphics, was tasked with coming up with a Fairgoers logo.

"Immediately, I thought to design an overall jersey with one strap undone, some grease stains and maybe a cartoony hairy chest underneath it," said Tripodi, who also designed last season's Devices logo. "As for the cap design, I thought of a dairy cow similar to Babybel Cheese's laughing cow. Because the fair was founded off the back of New York's great agriculture, a cow would make for a great mascot to represent the Fairgoers."

Tripodi's early concept drawings also an anthropomorphic corn on the cob, a large Ferris wheel, crops and an apple. But after additional rounds of brainstorming, the Fairgoers identity was scrapped in favor of Butter Sculptures. After finding out that people were prominently featured in nearly every New York State Fair butter sculpture, Tripodi initially designed a logo featuring a butter man that he describes as "almost Statue of David/The Thinker-esque."

"It was a very frightening sight and didn't last long, so I moved away from a human design and went back on the track of livestock," he said. "I made a cow completely out of butter. Unfortunately, the colors didn't really do it justice, but I tried to make a dairy cow that looked like he was made of butter with a big pad of butter on his back slowly melting away. No one liked the logo, myself included."

Sometimes, simpler is better, and Tripodi said that, ultimately, "thinking of the Butter Sculpture as statue waiting to be carved was the key." This being Minor League Baseball, the butter needed to a "snarky snarl" and "attitude."

Initially cow-themed, the Butter Sculptures logo evolved into a snarky stick of butter.

"The stick of butter has a big cocky grin, with tough guy-looking eyebrows and two thumbs up like the Fonz," he said. "That was our new Butter Sculpture mascot."

With the name and look finally established, the Mets set about creating a New York State Fair-themed night at the ballpark. Musicians and various performers -- such as a woman on stilts -- were stationed outside the ballpark, and between-inning entertainment was provided by the dog and frisbee show that is Mutts Gone Nuts. The first 1,000 fans received a Butter Sculpture Scooch bobblehead, featuring the mascot as a butter sculpture, toting two buckets of milk. Which, of course, is used to make butter. It was all very meta.

"We thought it was right in our wheelhouse to do a bunch of fun fair stuff, and we thought we could stretch it a little because so many people come to the fair," Smorol said. "It's not just a Syracuse thing, it's the whole state. It was just one of those things that we were able to do as a Minor League team, and we love doing it. And it was lot of fun just doing all the silly food."

On the culinary front, the Butter Sculptures offered New York State Fair-inspired concessions such as corn dogs, fried dough, deep fried pickles, "loaded" salt potatoes and chocolate covered potato chips. An Italian sausage sandwich, a venerated New York State Fair tradition, was also a must. (Smorol did note, however, that the team uses Hofmann sausages as opposed to those of the fair's vendor, Gianelli.) The Mets also used the occasion to debut the Amazin' Burger, topped with pulled pork, deep fried pickles and the regionally popular condiment known as boom boom sauce.

The only thing missing were actual butter sculptures, which were deemed to be too complicated an endeavor in non-climate controlled conditions. Security personnel at NBT Bank ballpark's VIP entrance picked up the slack, however, displaying their work throughout the evening alongside a sign reading, "When it comes to butter carving, there's no margarine for error."

On the field, the Butter Sculptures defeated the Scranton/Wilkes-Barre Railriders by a score of 6-2. When all was said and done, Smorol found himself facing a pressing question.

"Now we just have to figure out what we're going to do next year."