Path of the Pros: Jair Jurrjens

Coaches knew teenager had talent, mentality to make it 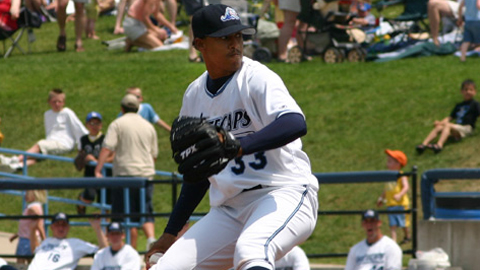 If you ask Mike Rojas what kind of person Jair Jurrjens is, be ready for a straightforward answer.

"I've got two daughters," Rojas said, "and I would love for either one of them to marry him. I'll put it like that."

Rojas, a hitting instructor in the Tigers system, was Jurrjens' manager at short-season Oneonta in 2004; they met up again 2006 at Class A Advanced Lakeland.

Jurrjens first came under Rojas' tutelage as a 17-year-old. He was born and raised on Curacao, a small island in the Netherlands Antilles just north of Venezuela, and he'd had a season and a half of experience in the United States.

"I think anybody at that age -- even guys coming from different states, let alone a different country -- get homesick and that sort of thing," said Altoona Curve manager Matt Walbeck, who was Jurrjens' skipper at Class A West Michigan in 2005 and again at Double-A Erie in 2007.

For Jurrjens, the heartache of leaving behind what he knew was tempered not only by a desire to get to the big leagues but also by a winning personality.

"He was a real easy guy to get along with," Walbeck recalled.

In the New York-Penn League, Jurrjens' affability allowed him to stay positive when his results on the mound were disappointing. In seven starts, he went 1-5 with a 5.31 ERA. Through that rough patch, the teenager didn't lose heart. Instead, he put his trust in his coaches and in his talent.

"I was fortunate enough to also have Johan Santana in Quad Cities [in 1998]. I had them when they were about the same age. Obviously, they're different -- Johan is a lefty and Jair is a right-hander -- but Jair had a better fastball than Santana."

Jurrjens' breaking ball, though, was still a work in progress. The effort he put into developing his curve in game situations helps explain some of the statistical irregularities during the 2004 season.

"[His curveball] did take a little bit to develop," Rojas admitted. "It always had good spin on it and a good bite to it," but it often caught the middle of the plate.

"He just needed to learn to control it."

The Tigers looked past the numbers to Jurrjens' tools and mental makeup. He moved up in 2005 to West Michigan of the Midwest League, where he went 12-6 with a 3.41 ERA. Like Rojas, pitching coach A.J. Sager immediately recognized Jurrjens' potential.

"Jair was advanced when I first saw him. He was only 19, but you could tell right away he had a good feel for pitching," said Sager, now the pitching coach at Triple-A Toledo. "More importantly at that age, he had good stuff. You could watch him and know he had a good shot at making it."

"Having a chance to see him pitch every fifth day, we knew we were looking at a real prospect," Walbeck agreed.

While Jurrjens continued to wow his coaches and frustrate opponents, Sager pushed him to work on his curveball.

"We tried to make [his breaking ball] a point of emphasis," Sager said. "It would have been easy for him to just throw his fastball and changeup and have a lot of success at that level. But we knew it would be important for him to get a good handle on a third pitch."

Walbeck noted that while Jurrjens' curve improved, the prospect continued to rely on his strong command and late movement on his other pitches.

"Jair pitched low in the zone," he said. "He kept the ball down and threw strikes, and he got a lot of ground balls. He had -- and still has -- late movement through the zone. As the batter swings, his pitches are dropping."

When Jurrjens reached the Class A Advanced Florida State League to start the 2006 season, he was poised to break out. To Rojas, seeing him pitch for the first time since their season in Oneonta, the difference was clear.

"You could really see the progression," he said. "He was just throwing strikes. He had better control, much better. He really smoothed out his mechanics. He had a lot of quality starts against quality teams in '06."

In fact, Jurrjens pitched so well that Rojas again had to say goodbye to his would-be son-in-law, who was promoted to Double-A Erie at midseason.

"I remember we were in a really tight race at the end of the first half," Rojas said. "We were going to Fort Myers to play the Miracle for a series. That's when he got called up."

Jurrjens left the league with a 5-0 record. He put up a 2.08 ERA and held opponents to a .198 batting average. The Flying Tigers wound up a half-game behind Fort Myers in the first half and missed the playoffs.

"I really would have loved to have him there. That's the sword of Minor League ball," said Rojas. "But he earned [the promotion]."

The jump to the Eastern League barely slowed Jurrjens. In 12 starts for the SeaWolves, he had a 3.36 ERA. After that 67-inning stint, he was back in Erie in 2007, reunited with Walbeck and Sager, both of whom also had been promoted. Seeing Jurrjens' curve two years later, Sager felt the prospect's days in the Minors were numbered.

"The sharpness of the pitch. ... that he could throw it down and away made a difference," he said. "It really armed him against right-handed hitters."

In the middle of the summer, everything came together. On June 27, pitching in Bowie, Jurrjens allowed a run on five hits over 7 1/3 innings. More impressively, he struck out nine and didn't issue a walk. He didn't even have a single three-ball count.

"He totally dominated. The whole game, he had zero three-ball counts and he only had two or three two-ball counts," Walbeck said. "Dick Egan, who's a scout with the Tigers, was there, and after the game he and I went over the performance. It was just incredible."

"His changeup, he could throw it absolutely where he wanted to that night," Sager recalled. "It had movement almost like a sinker. [Bowie was] a veteran team. It's not a bad park to hit in. You could say there were a lot of things that could work against the pitcher that game, but you could tell he had his stuff early on."

Against Harrisburg a month later, Jurrjens yielded one run and fanned 10 without issuing a walk over seven innings. In his next start against New Britain, he tossed a three-hit shutout, striking out 10 without walking a batter. He'd get just one more start in the Minors.

Between mid-August and season's end, the Tigers inserted Jurrjens in the starting rotation. He allowed 16 runs over 30 2/3 innings but proved he was ready for the Majors.

"[He] could have been a starter for just about any [Major League] team the next year," Sager said. "He had some things to learn -- he probably still does -- but he was ready."

The day after the 2007 World Series ended, Detroit traded Jurrjens to Atlanta in a deal for Edgar Renteria.

Now, when Sager's work with the Mud Hens allows, he tunes into Braves games for Jurrjens' starts, more to study him at work than for sentimental reasons.

"I watch when I can because I appreciate watching good pitching," he explained. "The feel he has for pitching is something that I think will get overlooked, just because of the quality of the stuff he has. But he knows what to do with that stuff.

"I don't get to see Jair [pitch] as often as I'd like, but I do see him often enough to know he's doing just fine."