Exec has been affiliated with Pawtucket for over 40 years 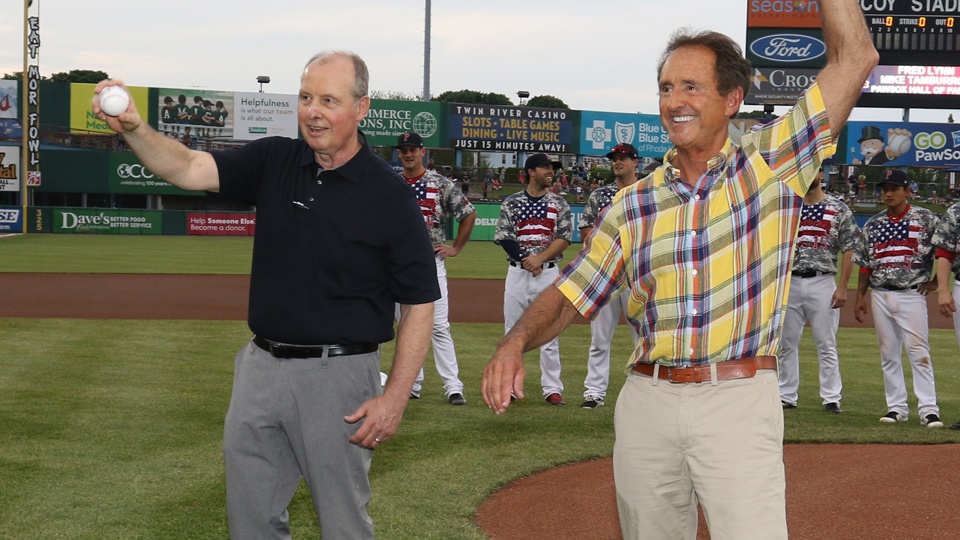 Mike Tamburro (left) and Fred Lynn were inducted into the Pawtucket Red Sox Hall of Fame on May 26, 2018. (Louriann Mardo-Zayat)

Tamburro will receive the King of Baseball Award at the Baseball Winter Meetings Banquet on Sunday, Dec. 9, at the Mandalay Bay Resort and Casino in Las Vegas.

"I am flattered and honored to win such a prestigious award," said Tamburro. "It really is an honor that is shared with everyone associated with the Pawtucket organization, past and present, as it has been all of their hard work that has allowed me to receive this honor."

Tamburro, a current co-owner of the PawSox, served as president of the PawSox for 31 years (1985-2015) after serving as general manager of the club for eight years (1977-84). He began his career in Pawtucket in 1977 at the urging of the Boston Red Sox who teamed him with Ben Mondor to save the troubled Boston Red Sox AAA affiliate for Rhode Island. The remarkable transformation orchestrated by the duo led to Pawtucket's rise from a previously bankrupt organization to one of the strongest and most successful franchises in all of Minor League Baseball as the PawSox went from drawing 70,000 fans in 1977 to 560,000 fans or more for 15 consecutive years from 1999-2013. Prior to the 1999 season Tamburro spearheaded a $16 million renovation of McCoy Stadium. During his 43-year tenure with the PawSox, over 18 million fans have visited McCoy Stadium.

In addition to his duties with the PawSox, Tamburro has served on several of Minor League Baseball's most prominent committees as he is a past member and former Chairman of the Board of Trustees, a founding board member of the Baseball Internet Rights Corp. (BIRCO) and a Director of the International League.

"Mike Tamburro has been a guiding force within the International League and Minor League Baseball for over 40 years, and during that time, there has been no league director or Board of Trustees representative more highly respected and appreciated by his colleagues or myself," said International League President Randy Mobley. "Always one to react with a measured and thoughtful approach, Mike is consistently the voice of reason and the source of sound advice. Mike has been a King within the industry for many years and this well deserved recognition simply makes it official."

Mike is a 1974 graduate of the University of Massachusetts with a degree in journalism and sports administration and resides in Seekonk, Massachusetts, with his wife, Anna. They have two adult daughters, Angela and Gina.