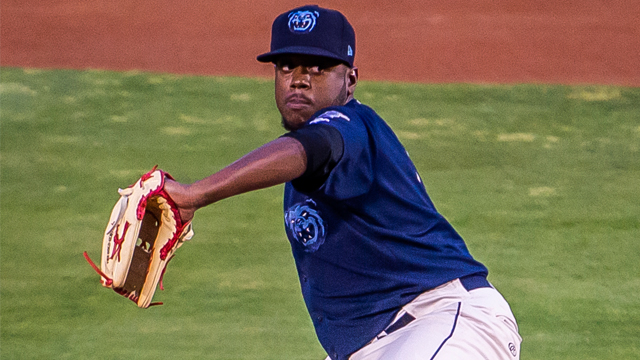 PEARL, Miss. (May 7, 2018) - The Mobile BayBears, the Double-A affiliate of the Los Angeles Angels, turned the lights out on the Mississippi Braves in a 5-0 win in the series opener Monday night at Trustmark Park.

Luis Pena (1-3) earned his first win since his Double-A debut last year on August 20, snapping a stretch of six straight losses. He allowed just two hits in five scoreless innings with five strikeouts. Mississippi (13-18) was not able to generate another hit after the third inning and only had one baserunner after the fourth.

Conor Lillis-White blacked out the Braves with three scoreless, hitless innings of relief. He faced just one over the minimum, issuing a two-out walk in the eighth. Ryan Clark retired the side in order in the ninth to seal the shutout victory, the third of the season for the BayBears (14-16).

Brennon Lund started the night with a leadoff double and scored the first run on a pair of wild pitches. He has been a bright spot in the lineup with four straight two-hit games since snapping out of an 0-for-21 stretch Friday.

Mobile lit up the scoreboard against Kyle Wright (1-4) with five runs on eight hits over 5 2/3 innings. Wright struck out a career-high eight batters but was handed his fourth loss of the season.

The BayBears continue the five-game road series against the Mississippi Tuesday at 7:00 p.m. CDT. Right-handed pitcher Jose Rodriguez (1-3, 3.00 ERA) is scheduled to make the start against southpaw Michael Mader (1-1, 3.43 ERA) for the Braves. Live coverage can be seen on MiLB.tv (Mississippi feed, subscription required, promo code: BAYBEARS) and heard on the BayBears Broadcast Network, the TuneIn Radio App, and the MiLB First Pitch App, with the Countdown to First Pitch starting at 6:45 p.m.

The BayBears return home Saturday and host a total of 70 home dates through Labor Day, September 3. Single-game tickets and ticket packages are currently on sale. Season tickets and group and hospitality offerings for the 2018 season can be reserved by calling (251) 479-BEAR (2327).