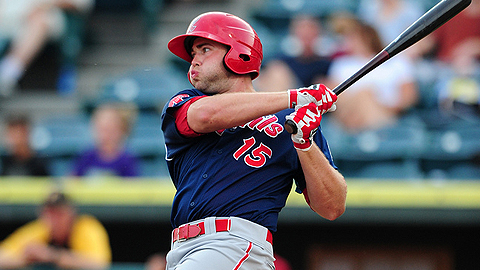 The 26-year-old Ruf entered August with only 18 homers, having gone deep just twice in April, seven times in May, five in June and four in July. He homered in three straight games last week (August 26-28) to pass Myers, who had led MiLB™ in home runs since the middle of June.

Ruf hit his final regular season homer on August 30. Myers also homered that day, but the 21-year-old Omaha outfielder was able to hit only one more roundtripper in his last four games and finished one behind Ruf with 37.

Myers began his season with Northwest Arkansas in the Texas League. After hitting 13 homers in 35 games, the Kansas City Royals promoted him to Omaha in May.

The Omaha, Neb., resident was recently named the Eastern League's Most Valuable Player and Rookie of the Year. Ruf narrowly missed winning the league's Triple Crown, leading the circuit with his 38 homers and 104 runs batted in. Ruf finished second in the Eastern League with a .317 batting average, five points less than Brock Holt of Altoona.

The Philadelphia Phillies drafted Ruf out of Creighton University in the 20th round in the 2009 draft.

The top home run hitter in each classification level, provided he is not the overall winner, receives $500. Oklahoma City RedHawks first baseman Mike Hessman led all Triple-A® players with 35 home runs. The 34-year-old Hessman is currently the active leader in career Minor League Baseball home runs with 364. Luke Montz of the New Orleans Zephyrs finished second in the classification with 29.

Spokane Indians third baseman Joey Gallo, who began his season by belting an Arizona League record 18 homers with the Rangers, ended it by leading all Short Season-A™ and Rookie® league players with 22. Daniel Vogelbach of the Boise Hawks finished with 17.

The New York-Penn League (today) and the Pioneer League (tomorrow) have yet to complete their regular seasons. However, Gallo's closest pursuers in these two circuits are seven homers behind him.

Here is the list of past Joe Bauman Home Run Award winners:

* The award was known by a different name in these two years.