Plug in and slay: The Fridge dominates 2019 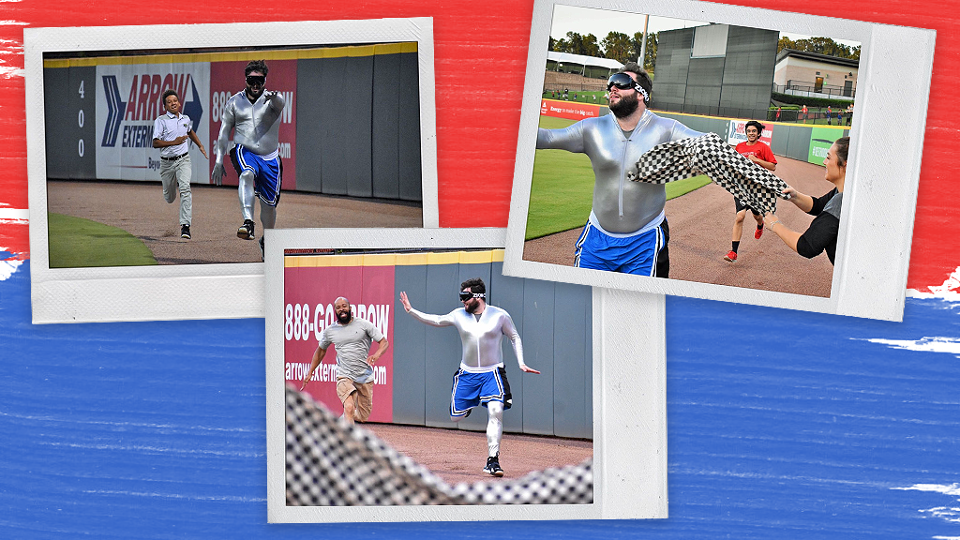 Nino Dandan, aka The Fridge, became a viral racing sensation for the Gwinnett Stripers this season. Now he's winning awards.

Nabih "Nino" Dandan spent the 2019 season as the Gwinnett Stripers' corporate partnerships trainee and is transitioning to a full-time role as the team's "Director of Fun." But much like Peter Parker, Clark Kent and Bruce Wayne, Dandan has an alter ego. This secret identity is hinted at in the last line of his Stripers' staff bio.

"He enjoys running on warning tracks in skin-tight suits."

Dandan is The Fridge, whom he morphs into during select Friday and Saturday games at the Stripers' home of Coolray Field. Wearing basketball shorts over, yes, a skin-tight bodysuit, the 6-foot-2, 300-pound Fridge is an everyman's alternative to the Atlanta Braves' celebrated racer, The Freeze.

The Freeze, a portrait of physical fitness, grants his opponents a five-second head start before inevitably overtaking them. The Fridge, a portrait of portliness, flips the script and is instead granted a five-second head start of his own. This built-in advantage -- largely squandered by the Fridge's limping, stuttering starts -- lulls his adversaries into a false sense of complacency. They are able to pass The Fridge with ease, only to be stunned later in the race as his glistening spandexed frame overtakes them at the finish line. Don't be fooled by The Fridge, whose girth is exceeded only by his stealth athleticism and unwavering will to win.

The Fridge became a hero of the common man in 2019, uniting a divided America via his body-positive foul pole-to-foul pole exploits. Videos of his races repeatedly went viral, amassing an estimated 100 million clicks across a variety of platforms. The accolades have continued into the offseason. In late September, The Fridge won a "Best In-Game Promotion or Event" Golden Bobblehead Award at the Innovators Summit in El Paso, Texas. Earlier this week, he took home a MiLBY Award for "Best In-Game Fun."

"Getting awards has been awesome. It's nice to see hard work recognized by other people," said Dandan, a native of Richmond, Virginia. "This is my first real job out of college. It's been fantastic. It means things are looking up for me personally and the Stripers as well."

The Stripers are owned by the nearby Braves and serve as Atlanta's Triple-A affiliate. The International League club shared the parent team's moniker from its inception in 2009 through 2018, but took on the fish-themed Stripers name prior to 2019. The Fridge's runaway success resulted in substantial publicity for this new identity.

"The rebrand allowed us to separate ourselves [from the Atlanta Braves], branding-wise," said Erin O'Donnell, Gwinnett's assistant general manager. "Then [The Fridge] helped establish who we are: funny, tongue-in-cheek, modern, hip and worthy of your entertainment dollars."

Not even a knee sprain can stop the Fridge! 🥶 pic.twitter.com/ztNBjZaN8V

Dandan, a graduate of George Mason University, conceived of The Fridge while angling for a job with the Stripers.

"Before I was hired on as a corporate partnerships trainee in mid-January, as I was going through that interview process, I was trying to think of any idea I could think of that would help if I did get hired," he said. "The Fridge came to me during my first- or second-round interview, but I didn't say anything until I got here. A month or two before the season, I brought it up. Everyone seemed to like it. It got approved, and we started in late April or early May. It's been a crazy ride."

The ride likely would have begun closer to Opening Night if not for a logistical hiccup.

"The only delay was waiting for the suit," O'Donnell said. "I mean, if he's not in his goggles, shorts and a onesie, then it's just a guy running. When Nino brought it up, there was immediately something there. It's a great testament to the fact that great ideas come from anywhere. We'll always be open to them. Why not? Give it a shot. See if it sticks."

A big part of The Fridge's appeal is the disconnect between his appearance and his athleticism.

"I've been on the fatter side my whole life," said Dandan. "In high school, I was a 6-2, 315-pound nose tackle, but I didn't play a lot because I didn't move very well with all the pads. But then in college, I was playing Quidditch at George Mason and I figured out, 'Wow, I've hit, well, not a growth spurt, but I've got speed and athleticism. Especially for someone my size.'"

Yes, Dandan's athletic awakening is thanks to Quidditch, a seven-on-seven broomstick-riding sport that made the leap from "Harry Potter" to real life.

"Whenever we played against another team, they'd expect me to be slow because I'm fat, but then I'd hit them with speed and their game plan would get all messed up," he said. "I'd catch them off guard."

This, of course, is the same formula employed by The Fridge. According to O'Donnell, "It only took two races to become a sensation in the park, then a month for it to take off online." Soon enough, The Fridge's races were appearing on SportsCenter's "Not Top 10" segment, and Dandan found himself doing an interview with Runner's World.

Video: Get Hyped for the Fridge

"When [a race] would go viral, the best part of it was the comeback," said Dandan. "One person gets going and then the other person comes in. That's when it got intense. If I get a five-second start, how do we make that the joke? It makes it interesting, them passing and me knowing enough to catch up and hopefully pass them. I try to win 'em all. Sometimes I face somebody that's in shape -- sometimes I face people that have done track in the past."

But pride goeth before the fall.

"There was legitimately an injury," said O'Donnell. "The Fridge got ahead of himself, fell backwards and had a concussion, the whole nine yards. So then there was a journey to get him back to racing shape."

The Fridge's midseason injury, which inspired the above team-produced satirical episode of "30-for-30," was followed by his biggest viral triumph.

"In August, we posted [a Beat The Fridge race], and most people who see it think he's racing [NFL cornerback] Richard Sherman," said O'Donnell. "It was pretty remarkable, seeing it getting views in England, in India. Just all kinds of people and outlets picking it up, all walks of life. Not just sports but culture and lifestyle. It really hit all the marks."

Another W for the Fridge this season!🥶 pic.twitter.com/7m2HyC8WuD

"For me, after a couple of races, I started to have fans who were on the bigger side come up to me," said Dandan. "They'd want a picture, ask me to sign things. There aren't a lot of us big guys who get love in the sports world. We're more often the butt of the joke. But what I'm showing is that no matter how long it's been or what your size is, that you can do whatever you want as long as you work hard and keep trying."

The Fridge will be working hard all offseason, with his training regimen and daily routines documented via "This is 'SportsCenter'"-style videos. He'll be back in 2020, along with whatever new characters the Stripers devise prior to Opening Night.

If you've wondered what the Fridge is up to this offseason... pic.twitter.com/CFMGJq6IqC

"Now every idea that comes forth, it's like, 'On a scale of 1 to Fridge, what kind of idea is this?'" said O'Donnell. "But that's the challenge to our staff: to not hold back on ideas. We don't want people to think they can't contribute, because everybody is part of the team."

One thing's for sure, The Fridge won't be holding back.

"I'm going to work on bulking up," said Dandan. "I'll keep getting bigger, eat a lot of donuts, beef up on the calories more. Just keep on keeping on, see if I can continue to dust these guys who think they're faster than me."