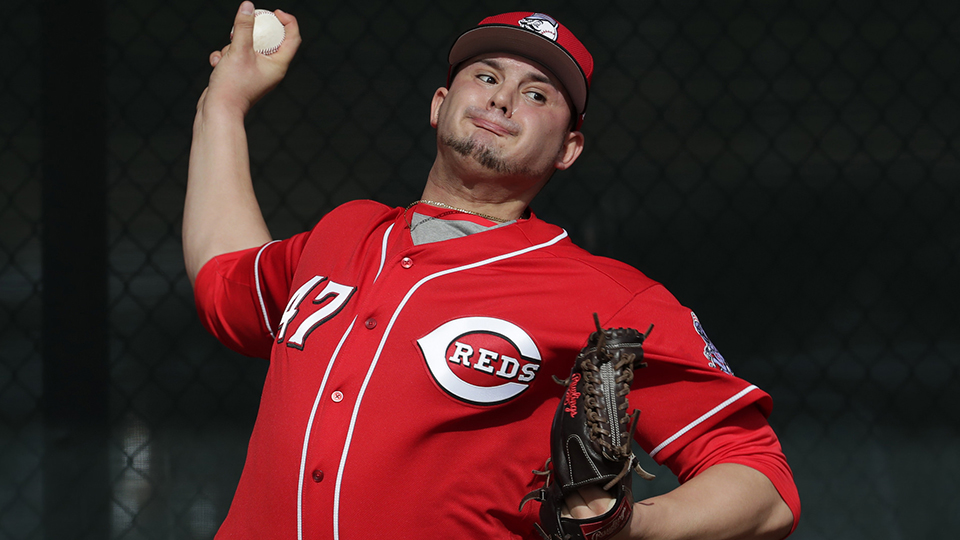 Sal Romano was added to the Reds' 40-man roster in November 2015 and sits one step away at Triple-A Louisville. (Matt York/AP)

Mariners OF Tyler O'Neill, Triple-A Tacoma: 2-for-5, HR, 2B, RBI, 2 R, 2 K -- O'Neill is known for his power and showed it with two extra-base hits in Tacoma's 7-2 win over El Paso, the homer coming in his first at-bat. In fact, four of his five hits this season have gone for extra bases (two homers, two doubles). He's yet to take a walk and has struck out five times in 20 plate appearances, so it hasn't been a perfect transition to Triple-A, but it's good to see the Mariners' No. 2 prospect find his bread and butter in the first week.

Reds RHP Sal Romano, Triple-A Louisville: 7 IP, 4 H, 0 R, 0 BB, 5 K, 1 HBP, 80 pitches, 55 strikes -- Even though he had yet to pitch above Double-A, Romano came close to cracking the Reds rotation out of Spring Training after posting a 3.15 ERA with 25 strikeouts and three walks in 20 Cactus League innings. Instead, he was optioned to Louisville on March 29 but has made the most of his first trip to the International League. Following Tuesday's gem, he has allowed only two earned runs on 11 hits and one walk while fanning eight in 13 innings over his first two Triple-A starts. The Reds have shown they're not afraid to give prospects a shot at The Show with Amir Garrett and Rookie Davis opening the season in Cincinnati, and it might not take much more from Romano before he gets his call.

Cardinals RHP Jack Flaherty, Double-A Springfield: 7 IP, 4 H, 1 R, 1 ER, 0 BB, 4 K, 91 pitches, 58 strikes -- It took until June 11 during the 2016 season for the Cardinals' No. 8 prospect to complete seven innings. It didn't even take him a week this time around. Flaherty has been near untouchable over his first two starts with only eight baserunners allowed (seven hits, one walk) over 13 2/3 innings in his first trip to the Texas League. At just 21, he opened up the season as one of the circuit's youngest arms, and as such, he was going to be given plenty of time to develop at Double-A. If he can keep this run going, the 2014 first-rounder might show he doesn't need it.

Orioles OF Cedric Mullins, Double-A Bowie: 3-for-4, 2B, R, CS -- Mullins is becoming must-watch material. The Orioles' No. 19 prospect notched his third straight multi-hit performance Tuesday and his fifth in first six games with Bowie. He leads all Minor Leaguers in hits (15), total bases (28) and runs scored (11) over the season's first week and has produced a .577/.607/1.077 line through 26 at-bats. That's a big jump for the 2015 13th-rounder who hit .273/.321/.464 over 124 games with Class A Delmarva. Mullins is known for his speed with 47 steals over his first two Minor League seasons, but continued improvements with the bat could go a long way toward helping his stock.

Angels OF Jahmai Jones, Class A Burlington: 3-for-6, HR, 2 RBI, 2 R, BB, K, 2 SB, CS -- Most of the Jones' damage came in the first game of the Bees' doubleheader with Wisconsin, when the Angels' top prospect went 3-for-4 with the long ball and two RBIs. The homer was Jones' first of the season, but perhaps more importantly, the 19-year-old also opened up his stolen base account with a theft in both ends of the twinbill. Jones' best tool is his speed, which helps him on the basepaths and in the outfield. After going 0-for-10 in his first two games, he's starting to reach base enough to take advantage of his wheels, and that should worry opposing Midwest League clubs.