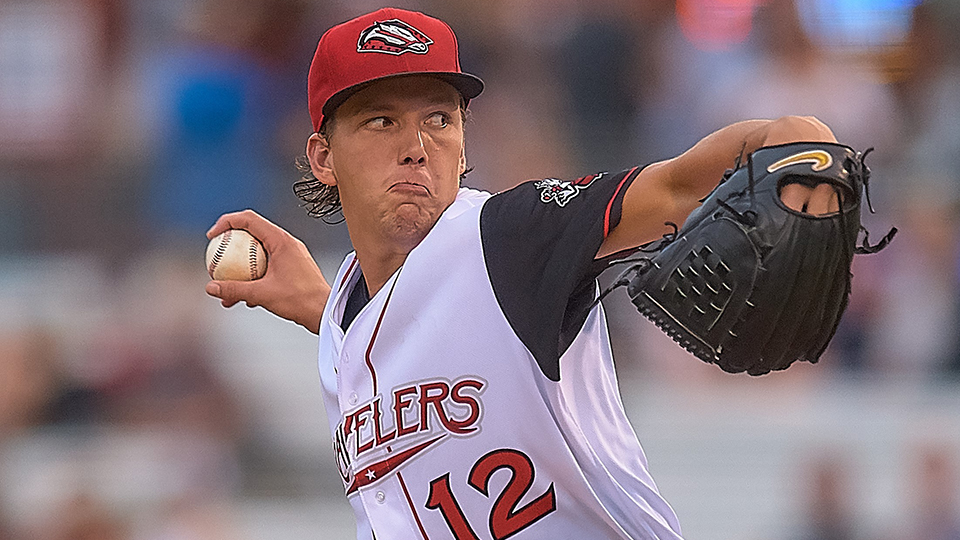 Mariners RHP Logan Gilbert, Double-A Arkansas: 6 IP, 0 R, 4 H, 1 BB, 8 K -- Seattle's No. 3 prospect notched his first scoreless start since July 11 in the Travelers' 2-0 win over Northwest Arkansas. Gilbert, a 2018 first-round pick, was perfect in his first and last innings as he reduced his Texas League ERA to 2.86. MLB.com's 51st-ranked prospect has a .192 opponents' batting average in six starts since a promotion from Class A Advanced Modesto. Gameday box score

Orioles C Adley Rutschman, Class A Short Season Aberdeen: 2-for-4, R, 2 RBIs, 2 BB -- Baltimore's top prospect reached base four times as the IronBirds topped Vermont, 7-2. Rutschman is 7-for-19 (.368) during a five-game hitting streak and has six RBIs in his last four contests. The top overall pick in this year's Draft has a .225/.329/.310 slash line across two levels. Gameday box score

Giants C Ricardo Genoves, Class A Augusta: 4-for-4, 2 R, 1 HR, 6 RBIs -- San Francisco's No. 22 prospect  fell a triple shy of the cycle and drove in a career-high six runs as the GreenJackets rolled past Greenville, 11-1. Genoves smacked a solo homer in the third inning, delivered a two-run double in the fourth and a three-run double an inning later. The 20-year-old Venezuelan is hitting .321 in eight games since he was promoted from Class A Short Season Salem-Keizer. Gameday box score

Cubs LHP Brailyn Marquez, Class A Myrtle Beach: 5 IP, 0 R, 3 H, 0 BB, 4 K -- Chicago's No. 4 prospect was credited with his first career complete game in the Pelicans' 8-0 rain-shortened win at Potomac. Marquez stretched his scoreless streak to 23 innings, going back four starts to July 25. The 20-year-old still ranks ninth in the Midwest League with 102 strikeouts and has given up three hits over 10 frames since a bump up to the Carolina League. Gameday box score

Mets LHP Kevin Smith, Double-A Binghamton:  6 IP, 0 R, 2 H, BB, 5 K -- New York's No. 11 prospect matched the longest start of his career in pitching the Rumble Ponies to a 2-0 blanking of New Hampshire in the opener of a doubleheader. Smith is unscored upon in three of his last six starts, spanning two levels. The 2018 seventh-round pick is 3-1 with a 1.98 ERA, 1.10 WHIP and .187 opponents' batting average in five Eastern League games. Gameday box score

Rays C Ronaldo Hernandez, Class A Advanced Charlotte: 2-for-5, 2 R, HR, 5 RBIs -- Tampa Bay's No. 7 prospect matched his career high with five RBIs as the Stone Crabs dominated Daytona, 13-2. A three-run shot in the seventh inning was his first homer since July 13. Hernandez has 11 RBIs in 11 games in August after driving in 12 runs in 22 contests in July. Gameday box score

Brewers RHP Carlos Luna, Rookie Advanced Rocky Mountain: 6 IP, 2 H, 0 R, 1 BB, 11 K -- The 22-year-old right-hander tied his career high with 11 strikeouts, a mark he hadn't reached since June 20, 2015 in the Rookie-level Dominican Summer League. Luna threw 63 of 87 pitches for strikes and held Great Falls to a pair of singles. With his first scoreless outing since his season debut, he moved into seventh place in the Pioneer League with a 4.09 ERA. Gameday box score

Brewers RHP Bowden Francis, Double-A Biloxi: 5 IP, 1 H, 0 R, 3 BB, 11 K -- A few steps up the Milwaukee organizational ladder, Francis came within one strikeout of matching the career high he set on June 11. The 23-year-old gave up only a third-inning single to Angels No. 2 prospect Brandon Marsh and worked out of a bases-loaded jam before retiring the last six batters he faced. He has a 3.44 ERA since the end of April and ranks fourth in the Southern League with 124 punchouts. Gameday box score

Astros 3B Abraham Toro, Triple-A Round Rock: 3-for-5, 1 2B, 1 RBI, 1 R -- Houston's No. 6 prospect continued his torrid August with three knocks as Round Rock beat Albuquerque, 4-2. Toro singled in the first and fifth innings and doubled in the seventh for his sixth multi-hit game of the month. The 22-year-old is batting .439/.520/.561 with 11 runs scored and eight RBIs in 10 August games. Gameday box score

Blue Jays RHP Luis Quinones, Class A Short Season Vancouver: 4 IP, 0 H, 0 R, 0 BB, 8 K -- Working out of the bullpen for the fourth straight time, Quinones was brilliant in the Canadians' 9-0 romp at Eugene. The 22-year-old set a career high for strikeouts and did not allow an earned run for the seventh time in eight appearances. He picked up his first professional win and dropped his Northwest League ERA to 0.86. Gameday box score