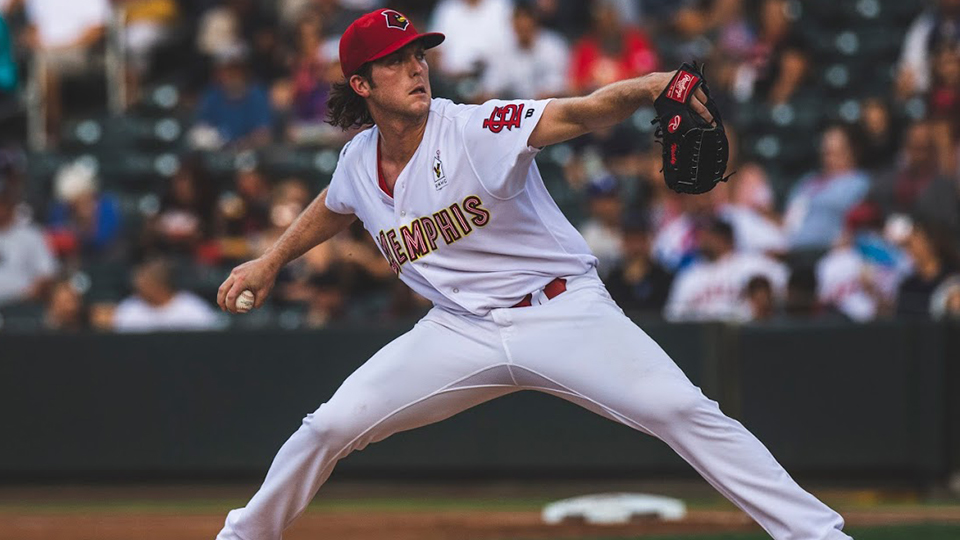 Jake Woodford is one of three Pacific Coast League starting pitchers with an ERA under 4.00. (Jorge Salgado/El Paso Chihuahuas)

Cardinals RHP Jake Woodford, Triple-A Memphis: 6 IP, 1 H, 0 R, 4 BB, 7 K -- St. Louis' No. 15 prospect allowed just a fifth-inning single in his fourth scoreless outing of the season as the Redbirds beat Iowa, 8-2. Woodford faced the minimum in half of his six frames and matched his season high for strikeouts. The 22-year-old is second in the Pacific Coast League with 118 strikeouts over 134 innings and ranked third with a 3.96 ERA. Gameday box score

Mariners OF Julio Rodriguez, Class A Advanced Modesto: 4-for-5, HR, 2B, 4 RBI, R -- The second-ranked Seattle prospect made a spectacular California League debut, helping the Nuts roll past Lancaster, 12-1. A night after he was promoted from Class A West Virginia, Rodriguez smacked his grand slam of the week to cap his second four-hit game of the season. MLB.com's No. 53 overall prospect is 12-for-22 with two homers and 13 RBIs in his last five contests across the two levels. Gameday box score

Orioles RHP Grayson Rodriguez, Class A Delmarva: 3 IP, 0 H, 0 ER, 0 BB, 6 K -- MLB.com's No. 46 overall prospect extended his hitless and scoreless streaks to eight innings with a perfect outing in the Shorebirds' 5-0 win at Lakewood. Rodriguez would rank third in the South Atlantic League with a 2.59 ERA if he had enough innings to qualify. As it is the Orioles' No. 2 prospect is tied for fourth with nine wins and places sixth with 117 strikeouts. Opponents are hitting .173 against the 19-year-old. Gameday box score

Red Sox RHP Thad Ward, Class A Advanced Salem: 5 IP, 1 H, 0 ER, 3 BB, 7 K -- For the second start in a row, Boston's No. 9 prospect gave up one hit over five scoreless innings. After working out of a jam in the second, Ward faced two batters over the minimum the rest of the way. The 2018 fifth-round pick is 8-4 with a 2.01 ERA and .197 opponents' batting average across two levels in his first full Minor League season. Gameday box score

Mariners OF Jarred Kelenic, Double-A Arkansas: 1-for-3, HR, 2 RBI, BB -- Seattle's top prospect smacked his first Double-A homer, a two-run shot, in the Travelers' 5-2 loss at Springfield. Kelenic is batting .217/.280/.435 with three extra-base hits and three RBIs in six games since he was promoted from Class A Advanced Modesto. Across three levels in his first full professional season, MLB.com's No. 23 overall prospect has a .295/.370/.533 slash line. Gameday box score

Braves RHP Nolan Kingham, Double-A Mississippi: 7 IP, 3 H, 0 R, 2 BB, 8 K -- The right-hander posted his first scoreless outing since he was promoted to Mississippi on Aug. 5. Kingham began the season with Class A Rome, started 18 games for Class A Advanced Florida and has a 1.50 ERA in his first 18 innings with the M-Braves. Across the three levels, the 22-year-old is 6-10 with three shutouts, a 3.66 ERA and 1.19 WHIP in 24 starts. Gameday box score

Red Sox SS C.J. Chatham, Triple-A Pawtucket: 3-for-4, HR, 2 RBI, 2 R -- It took only four games for Boston's No. 11 prospect to smash his first International League home run, belting a solo shot in the third inning of the PawSox's 7-4 victory over Toledo. Chatham was promoted from Double-A Portland on Tuesday after putting up an Eastern League-best .297 average in 90 games. He's hit safely in three of his first four Triple-A games. Gameday box score

A's SS Logan Davidson, Class A Short Season Vermont: 1-for-3, 2 RBI, 3 R, 3 BB -- Oakland's first-round pick in this year's Draft and seventh-ranked prospect reached base ]four times and ripped a two-run double in the Lake Monsters' 13-6 triumph over Brooklyn. Davidson has been swinging a heavy bat as of late, going 13-for-40 (.325) with two homers, 12 runs scored and six RBIs in his last 10 games. The 21-year-old switch-hitter has a .242 average and .706 OPS with four dingers, six doubles and RBIs in 42 New York-Penn League games. Gameday box score

Nationals RHP Luis Reyes, Class A Advanced Potomac: 4 IP, 2 H, 0 R, 0 BB, 10 K -- The right-hander was dominant in his 28th appearance of the season, tying his career high for strikeouts in the P-Nats' 5-2 loss at Winston-Salem. Reyes struck out the side in the sixth and eighth innings for his first double-digit punchout effort since June 8, 2017. The 24-year-old has a 3.32 ERA in 22 games as a reliever as opposed to an 8.31 mark in six starts. Gameday box score

Marlins OF Brian Miller, Double-A Jacksonville: 3-for-5, 2B, 3 RBI, 3 R -- Miami's No. 25 prospect broke out of a 3-for-23 funk with his fifth game with at least three hits this season. Miller delivered a two-run single in the second inning and an RBI double in the fourth as the Jumbo Shrimp topped Tennessee, 5-3. The 23-year-old is tied for sixth in the Southern League with 23 doubles and is tied for seventh with 106 hits. Gameday box score