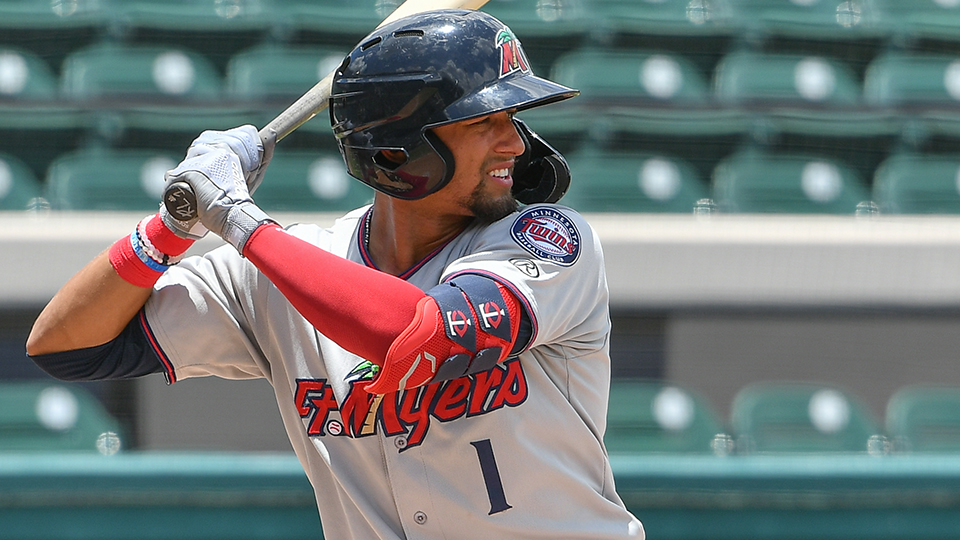 Royce Lewis is hitting .271 with six homers and 15 RBIs in 26 games since the Florida State League All-Star break. (Tom Hagerty/MiLB.com)

Twins SS Royce Lewis, Class A Advanced Fort Myers: 3-for-5, 2B, 2 R -- The top Twins prospect has been turning it on at the plate in July and Friday's effort was another step in the right direction. He delivered his third three-hit game of the season and boosted his average for the month to .302. Like the other two times in which MLB.com's No. 7 overall prospect he had three hits, this one included a double. Lewis collected hits in his first three trips to the dish, with the double coming in the third inning of the Miracle's 6-5 win at Florida. Gameday box score

Braves RHP Ian Anderson, Double-A Mississippi: 7 IP, 5H, 1 R, 10 K -- Atlanta's No. 3 prospect has only gotten better as the season's gone on. Anderson matched his longest start of the year, reaching double-digit strikeouts for the third time. Through three starts in July, the 21-year-old right-hander has a 1.93 ERA and 1.00 WHIP with 16 strikeouts over 14 innings. He leads the Southern League with 129 strikeouts and ranks second with a .202 opponents' batting average. Gameday box score

Indians IF Tyler Freeman, Class A Advanced Lynchburg: 3-for-4, 2B, 3 R -- Cleveland's No. 3 prospect excelled in the Midwest League, earning a promotion to the Hillcats in June after hitting .292 with 24 RBIs. On Friday, he notched his third three-hit game since moving up to the Carolina League, ripping a double and two singles in Lynchburg's 6-4 win over Fayetteville. Since moving up a level, MLB.com's No. 85 overall prospect is hitting .366/.420/.465 in 21 games. Gameday box score

Rockies LHP Ryan Rolison, Class A Advanced Lancaster: 6 IP, 2 H, 0 ER, 2 BB, 6 K -- Colorado's third-ranked prospect produced his first scoreless outing since moving up to the California League in late April. Rolison bounced back after surrendering 11 earned runs on six innings in his previous two starts. The 2018 first-round pick lowered his ERA with the JetHawks to 4.88, and the two hits were the fewest he's allowed since his Cal League debut. Gameday box score

Red Sox OF Marcus Wilson, Double-A Portland: 2-for-4, 2 HRs, 4 RBIs, 2 R -- The No. 21 Red Sox prospect recorded his second multi-homer game in less than a month. Against Harrisburg, he crushed a solo shot to left field in the second inning. He followed that up an inning later with a liner to left that cleared the wall for a three-run blast. In six games since returning from Class A Advanced Salem, Wilson is 4-for-16 with two homers, six RBIs and six runs scored. Gameday box score

Orioles OF Robert Neustrom, Class A Delmarva: 4-for-5, 2B, 2 RBIs, 2 R -- Without a four-hit game in his career heading into Friday night, Neustrom changed all that in the Shorebirds' 9-5 win at West Virginia. In the fifth inning, he put them on the board with a run-scoring single to center field. In the ninth, he bookended the scoring with another RBI knock. The Orioles' No. 28 prospect upped his average to .286 and his OPS to .815. Gameday box score

Rangers 2B/OF Nick Solak, Triple-A Nashville: 3-for-4, 3 R, 2 RBI -- The Rangers' No. 10 prospect recorded his third two-homer game of the season and first since coming over from the Rays in a July 13 trade. Solak belted a pair of solo shots in the Sounds' 6-5 win over Iowa. The three-hit performance was his seventh of the season and first since June 28. In 90 games at the Triple-A level, the Illinois native is batting .266 with 19 taters and 51 RBIs. Gameday Box Score

Dodgers P Edwin Uceta, Double-A Tulsa: 6 IP, 4 H, 0 R, 0 ER, 2 BB, 5 K -- The Dodgers' No. 20 prospect earned his sixth win of the season and second since a June 4 promotion from Class A Advanced Rancho Cucamonga. In winning his second straight start, the native of the Dominican Republic gave up four singles and two walks. Since June 15, Uceta has a 1.56 ERA and 39 strikeouts over 34 2/3 innings. Gameday Box Score

Astros OF Corey Julks, Class A Advanced Fayetteville: 4-for-5, 2 RBI, 1 R -- The Astros outfielder prospect highlighted his first four-hit performance of the season with a leadoff homer in the second inning of the Woodpeckers' 6-4 loss at Lynchburg. Julks added three singles to bump his average to .273. He's got a .277/.384/.434 slash line in 24 games since the Carolina League All-Star break. Gameday Box Score

Mariners 2B Tim Lopes, Triple-A Tacoma: 2-for-4, 5 RBI, 1 HR, 1 R -- The 25-year-old infielder cranked his first career grand slam en route to a season-high five RBIs as the Rainiers' 8-6 loss to Sacramento. Seattle's sixth-round pick in the 2012 Draft, Lopes continues to produce in his second year at Triple-A. Friday's effort extended his hitting streak to 12 games, during which he's 17-for-47 (.362). Gameday box score

D-backs IF Camden Duzenack, Class A Advanced Visalia: 3-for-5, HR, 5 RBI, R -- The California League midseason All-Star tied his career high for RBIs in the Rawhide's 9-2 victory at Inland Empire. Duzenack smacked a two-run homer in the fifth inning, delivered an RBI single in the sixth and plated two more runs with another knock in the seventh. It continued a productive month for the 24-year-old, who has nine extra-base hits and 19 RBIs in 24 games in July. Gameday box score