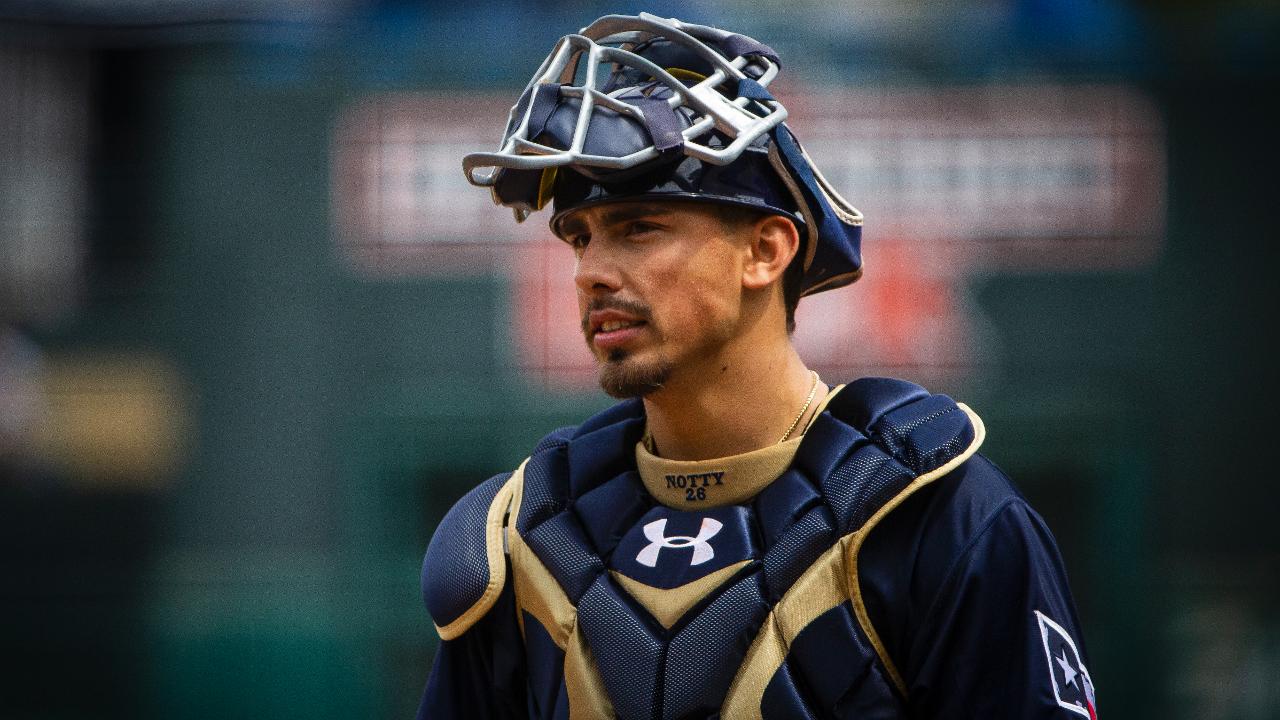 Jacob Nottingham sports a slash line of .277/.382/.446 in the Pacific Coast League this season. (Cody Roper/MiLB.com)

Brewers C Jacob Nottingham, Triple-A San Antonio: 4-for-5, HR, 6 RBI, 1 R -- Milwaukee's No. 16 prospect anchored San Antonio's 19-1 mashing of Reno, racking up four hits and driving in six runs. He got started early with an RBI single to right field in the first inning. He belted a two-run homer to left in the next frame, knocked in two with a single to center in the third and capped his day by being hit by a pitch from right-hander Joey Krehbiel for his sixth RBI in the fourth. Nottingham is batting .277/.382/.446 on the season with the Missions, with three homers and 20 RBIs. Gameday box score

Braves RHP Nolan Kingham, Class A Advanced Florida: 9 IP, 3 H, 1 BB, 0 R, 7 K -- The Atlanta right-hander turned in his third complete game of the season, blanking Daytona while allowing three hits and striking out seven, his second-highest total of the year.The hits Kingham surrendered came in the first four frames, and his lone walk was issued to Reds No. 22 prospect Hendrik Clementina in the fifth. He was lights-out from there on, facing the minimum over the final four innings. Braves No. 30 prospect Riley Delgado posted four hits and scored a run to raise his average to .300. Gameday box score

Padres SS CJ Abrams, AZL Padres 1: 4-for-4, HR, 1 RBI, 2 R, 1 BB -- San Diego's first-round pick was perfect at the plate with his first Minor League homer in his professional debut. The long ball came in the fourth, when Abrams took right-hander Matt Waldron over the fence in right on the second pitch. He also logged an RBI single in the second, singles in the first and eighth innings and a walk in the sixth. The Padres drafted the infielder out of Blessed Trinity Catholic High School at No. 6 overall earlier this month. Gameday box score

Mariners LHP Justus Sheffield, Double-A Arkansas: 5 IP, 4 H, 2 BB, 1 R, 7 K -- Seattle's fourth-ranked prospect bounced back from a shaky outing in which he allowed eight runs in less than two innings with a five-frame gem for Arkansas against Corpus Christi. His lone blemished inning was his final one. He surrendered a triple to Osvaldo Duarte with one out and the second baseman came home on a sacrifice fly from Bryan De La Cruz. MLB.com's No. 75 overall prospect is 2-6 with a 6.45 ERA on the season over 13 starts for the Travs. Gameday box score

Phillies 3B Alec Bohm, Class A Advanced Clearwater: 3-for-4, HR, 3 RBI, 1 R -- MLB.com's No. 39 overall prospect went deep for the fourth time since joining the Threshers against Bradenton. Bohm singled in the first and drove in Philadelphia's No. 20 prospect Daniel Brito with another knock in the third. He plated the go-ahead runs for Clearwater in the eighth with a long ball off right-hander Samuel Reyes to left-center that drove in No. 12 Simon Muzziotti. The Philies' top-ranked prospect is batting .325 in 39 games with the Threshers and .339 on the season overall. Gameday box score

Mets SS Andres Gimenez, Double-A Binghamton: 3-for-5, 2 2Bs -- The Mets' top prospect doubled twice in the Rumble Ponies' 6-3 win over New Hampshire. Giménez started with a bang, doubling to right off right-hander Hector Perez on the third pitch of the game. He beat out a single to third and stole second base in the sixth, and later doubled down the left-field line in his final at-bat in the eighth. MLB.com's No. 59 overall prospect sports a line of .242/.311/.360 on the year and has stolen 11 bags. Gameday box score

Mariners 2B Donnie Walton, Double-A Arkansas: 3-for-4, HR, BB, 1 RBI, 2 R -- Seattle's No. 29 prospect continued his strong season with the Travelers with three hits and his eighth homer. He reached in his first three trips to the plate, walking in the first and slapping base hits in the third and fifth. He stepped in with the game tied to start the seventh and gave Arkansas the lead with a solo shot to left off right-hander Yohan Ramirez. Walton has a slash line of .315/.405/.447 with 29 RBIs this season. Gameday box score

Tigers RHP Alex Faedo, Double-A Erie: 5 2/3 IP, 4 H, 1 BB, 0 R, 4 K -- Detroit's No. 9 prospect was steady again for the SeaWolves, allowing four hits and striking out four over 5 2/3 scoreless frames. In the fifth, he allowed back-to-back singles to Deiner Lopez and Jarren Duran with two outs, but escaped further trouble by getting Jhon Nunez to ground sharply back to him at the mound to end the inning. Faedo lowered his ERA to 3.41 and has allowed four runs across 27 innings in his last five starts. Gameday box score

Twins RHP Jhoan Duran, Class A Advanced Fort Myers: 5 IP, 2 H, 3 BB, 1 R, 11 K -- The Twins' No. 7 prospect took the loss but was stellar in his first-ever relief appearance. Duran replaced starter Adalberto Mejia after one frame and quickly got into a bit of trouble. Thomas Milone singled to center to score Moises Gomez, who led off the inning with a base hit to left. Duran was excellent from there on out, finishing with 11 strikeouts -- his second-highest total of the year -- including three in his final frame. Gameday box score

Athletics 3B Sheldon Neuse, Triple-A Las Vegas: 4-for-4, 2B, BB, 2 RBI, 2 R -- Oakland's No. 9 prospect racked up a season-high four hits in the Aviators' 12-1 win over Memphis. He singled to center to plate Corban Joseph in his first trip to the plate, then barreled a ground-rule double to center to start the third, later scoring on a sacrifice fly by Dustin Fowler. He walked in the fifth, belted an RBI single to right in the sixth and another to center in the ninth before scoring on Fowler's grand slam. Neuse raised his average to .309 with the showing. Gameday box score

Dodgers 3B Edwin Rios, Triple-A Oklahoma City: 3-for-5, HR, 3B, 3R, 2 RBI -- Los Angeles' 12th-ranked prospect finished a triple shy of the cycle after singling to center in the first, lining an RBI double to right in the third and homering to right-center in the fifth. He followed an 0-for-4 showing Monday with his third game of the season with at least three hits. Gameday box score