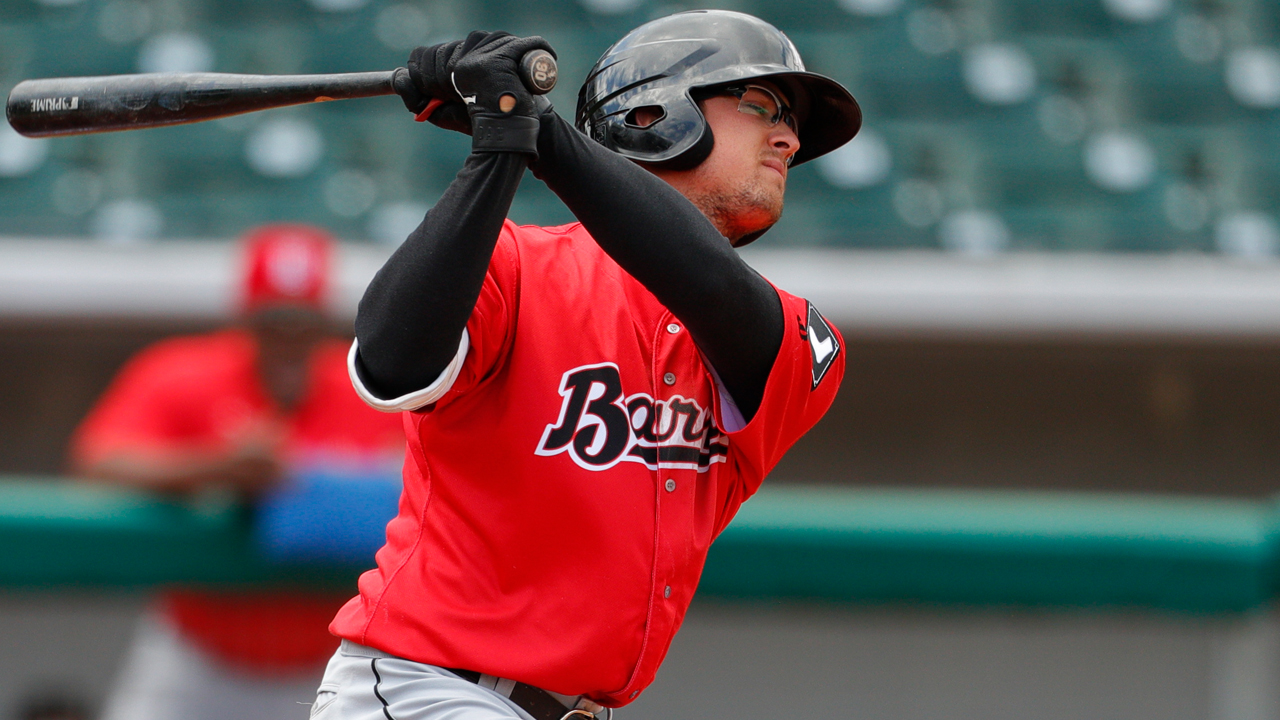 Blake Rutherford's four-hit showing for Birmingham was his first such game at Double-A. (Danny Parker/MiLB.com)

White Sox OF Blake Rutherford, Double-A Birmingham: 4-for-5, 2 RBIs -- Chicago's No. 8 prospect posted a season high in hits with his first four-hit game since April 19, 2018 for Class A Advanced Winston-Salem as Birmingham edged Chattanooga, 7-5. Rutherford singled to right field in the second inning, left in the fourth and center in the sixth. After striking out in the eighth, he came through with his final knock to center, driving in fourth-ranked Nick Madrigal with an insurance run in the ninth. Madrigal, baseball's No. 39 overall prospect went 3-for-4 with a double, walk and three runs scored in the win. Gameday box score

Pirates RHP Mitch Keller, Triple-A Indianapolis: 7 1/3 IP, 6 H, 1 R, 0 BB, 6 K -- Baseball's No. 17 prospect pitched into the eighth inning for the first time in a start this season and posted his first walk-free start since May 2 in a 3-1 win over Louisville. The righty was economical, firing 60 of his 93 pitches for strikes. Keller cruised late, retiring nine straight from the final out of the fourth through the second out in the seventh. Gameday box score

Braves LHP Tucker Davidson, Double-A Mississippi: 6 IP, 3 H, 0 R, 3 BB, 6 K -- Davidson posted his third straight appearance without an earned run and completed six innings for the first time since May 29 in the win. Atlanta's No. 18 prospect faced just three batters over the minimum in six innings. Baseball's No. 14 overall prospect Cristian Pache homered to left field in the first inning for the only tally in Mississippi's 1-0 victory. Gameday box score

Blue Jays OF Jonathan Davis, Triple-A Buffalo: 2-for-4, 5 RBIs, 3 R, 1 BB -- With his first multi-homer game since June 5, 2016 while with Class A Advanced Dunedin, the No. 29 Blue Jays prospect jolted his offense with a two-run blast to left in the first and added a three-run shot to center in the sixth. Davis wasn't the only Bisons player to leave the yard multiple times as Patrick Kivlehan added a pair of homers and three RBIs. Gameday box score

Mets SS Andres Gimenez, Double-A Binghamton: 2-for-4, 1 HR, 2 BB, 3 R, 2 RBIs -- The top Mets prospect accounted for two of his team's three runs in a 3-0 victory over Erie in Monday's regularly scheduled contest. Facing No. 15 Tigers prospect Logan Shore, Gimenez singled to center in the first and walked in the fifth. That showing came after homering in the conclusion of a game suspended on June 14. Between the two contests, Gimenez stole three bases. Gameday box score

Nationals 2B Carter Kieboom, Triple-A Fresno: 2-for-2, 1 HR, 3 BB, 2 RBIs, 2 R -- Washington's top prospect has been an on-base machine of late and continued that run by reaching five times, the third straight game he's been aboard at least that many times. Baseball's No. 21 overall prospect has multiple hits in five straight games and has scored at least once in six straight contests. Gameday box score

Dodgers 3B Edwin Rios, Triple-A Oklahoma City: 3-for-4, HR, BB, 2 RBIs, R -- The 12th-ranked Dodgers prospect turned in his second consecutive multi-hit effort. Rios worked a six-pitch walk in the third, lined singles into center in the fifth and seventh, and capped off his night with a two-run blast over the wall in left-center. The 25-year-old has five knocks in his last two games. Teammate Zach Reks went yard twice and drove in four runs. Gameday box score

Tigers C Jake Rogers, Triple-A Toledo: 3-for-5, HR, RBI, R -- Detroit's No. 12 prospect snapped a 1-for-12 skid in his first at-bat against the Clippers with a dinger to left-center to lead off the third. Rogers also notched a base hit to right in the fifth and a single to left in the eighth. The 24-year-old has 12 long balls this year. No. 19 prospect Danny Woodrow and 28th-ranked Dustin Peterson chipped in with three hits apiece. The trio accounted for nine of the Mud Hens' 15 hits in the game. Gameday box score

Rockies 1B Roberto Ramos, Triple-A Albuquerque: 2-for-5, HR, 4 RBIs, R -- The 26th-ranked Rockies prospect appears to be heating up for the Isotopes. After driving in a run on a fielder's choice to second base in the third, the 24-year-old slugged a grand slam to right in the sixth. It was his 17th tater of the year and blew the game open, 10-3. Ramos has five hits and six RBIs over his last two games. No. 16 prospect Yonathan Daza added three hits and scored twice for Albuquerque. Gameday box score

Rays 2B Nick Solak, Triple-A Durham: 2-for-4, HR, BB, 4 RBIs, R -- The Rays No. 12 prospect made the most of his pair of hits. Solak gave his squad an early lead with a two-run dinger to right in the opening frame -- his 16th blast of the year. Then after a four-pitch walk in the fourth, the 24-year-old punched a two-RBI single through a hole on the right side of the infield in the eighth to cap the Bulls scoring. It marked the second time this season Solak drove in at least four. Gameday box score

Dodgers C Connor Wong, Class A Advanced Rancho Cucamonga: 3-for-6, 3B, 3 RBIs, R -- The 13th-ranked Dodgers prospect has hit safely in four straight games. After knocking a ground-ball single to left in the first, Wong swiped his seventh bag of the year and scored two batters later on a hit by No. 7 prospect Jeter Downs. The 23-year-old tied the game with an RBI knock to left in the fourth and capped the Quakes scoring with a rocket two-run triple to center. It was Wong's third three-hit performance of the season. Gameday box score

Reds OF Quin Cotton , Rookie Advanced Billings: 2-for-4, HR, 2B, BB, 5 RBIs, 3 R -- The Reds' eighth-round selection in this year's Draft made a loud opening statement with his third straight multi-hit performance. Cotton started the scoring for the Mustangs with a two-RBI double to right in the first inning. He was plated on a two-run shot by Edwin Yon. The 21-year-old worked a seven-pitch walk in the third and scored on a sacrifice fly by Leonardo Seminati. In the fourth, Cotton put the game out of reach with a three-run dinger to right. He has recorded at least one hit in six of eight games this season and reached base safely in all but one game. Gameday box score