Prospect Roundup: Games of May 9 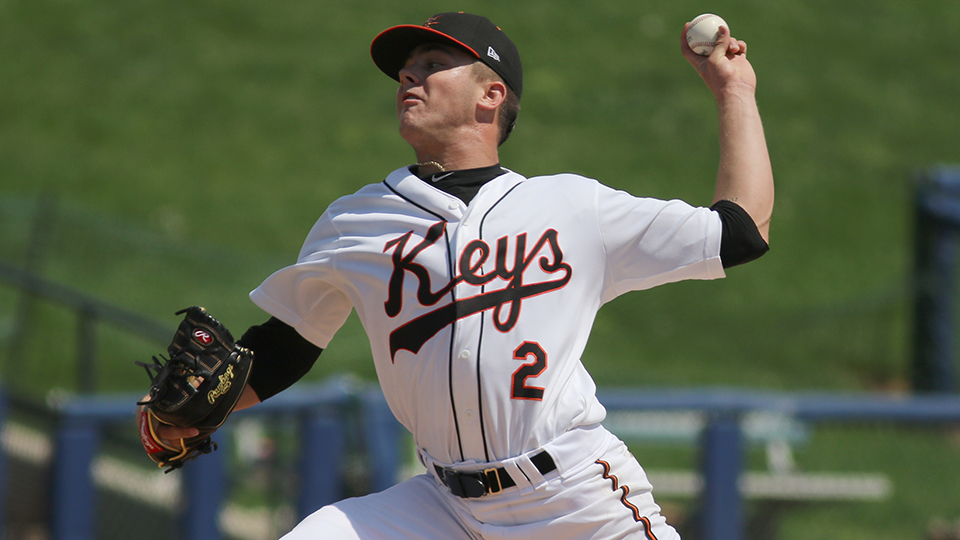 Orioles LHP DL Hall, Class A Advanced Frederick: 4 IP, 1 H, 0 R, 3 BB, 8 K -- After struggling to a 5.40 ERA through his first four starts, Baltimore's No. 3 prospect came out of the bullpen to stifle any hope of a Potomac rally. Hall recorded eight of 15 outs via the strikeout, matching his season high set on April 26 against Winston-Salem. The 20-year-old tossed 39 of 67 pitches for strikes en route to the first save of his professional career. The outing marked the third career relief appearance for Hall, who started 20 of his 22 outings last season. Gameday box score

White Sox OF Ian Dawkins, Class A Kannapolis: 5-for-6, HR, 3 R, 2 RBIs -- With his teammates contributing 14 hits of their own, the 23-year-old was far from the only Intimidator swinging the lumber -- but he was the best. Dawkins contributed an RBI infield single and slugged his first home run of the season and fourth of his career. The Hayward, California native had a pair of four-hit games last year with Rookie Advanced Great Falls. He topped that when he lined a first-pitch single in the ninth inning on Thursday to establish a new career high with five hits, which boosted his average 27 points to .302. Gameday box score

Cubs RHP Javier Assad, Class A Advanced Myrtle Beach: 6 IP, 1 H, 0 R, 2 BB, 6 K -- The Chicago right-hander didn't use his foot to record an out like he did in his last start. Instead, he went the more conventional route to pitching his second consecutive scoreless outing. Assad extended his streak to 14 zeros with an exclamation point against Down East. Although he did not factor into the decision, the 21-year-old retired the last 11 batters he faced and has surrendered two runs or fewer in five of his first six starts of 2019. Gameday box score

Red Sox 1B Triston Casas, Class A Greenville: 3-for-4, HR, 4 RBIs -- An early-season slump seems to be a thing of the past for Boston's second-ranked prospect. Casas' fourth homer in eight games helped produce a career-high in RBIs for last year's first-round Draft pick. The 19-year-old popped a two-run blast in the opening frame and added a two-run single in the seventh that put the Drive in front for good. After batting .208/.284/.364 with two roundtrippers and 11 RBIs in 22 games in April, Casas has driven in 11 runs and gone deep four times while batting .367/.424/.867 in eight contests this month. Gameday box score

Mariners DH Jarred Kelenic, Class A West Virginia: 3-for-4, 2B, R -- Seattle's No. 2 prospect won't turn 20 until July, but he looks mature beyond his years in his first go-around in the South Atlantic League. After doubling and driving in two runs during the first game of the Power's doubleheader sweep, Kelenic added another double among his three hits in the nightcap to boost his season slash line to .345/.439/.652. MLB.com's No. 51 overall prospect has reached safely in all but two of the 31 games he's appeared in for West Virginia. Gameday box score

Mariners C Jake Anchia, Class A West Virginia: 2-for-4, 2 HR, 5 RBIs -- Having seen his average dip well below the Mendoza Line, the Seattle backstop has responded with consecutive multi-hit games to push his average back over the .200 plateau with some room to spare. Anchia homered in each of his first two at-bats in the first game of West Virginia's twinbill -- a three-run blast in the first and a two-run homer in the third. The five RBIs were a career-high for the 22-year-old, who was the Mariners' seventh-round pick in last year's Draft out of Nova Southeastern University in Florida. Gameday box score

Twins Utility Travis Blankenhorn, Double-A Pensacola: 3-for-4, 1 HR, 2 RBI, 1 R -- After struggling in the Florida State League last year, Minnesotta's No. 28 prospect bounced back with a promotion to Pensacola at the end of April. The 23-year-old hit .231 last year for Class A Advanced Fort Myers, but has started this season with a .279 average between 28 games in the two leagues. He crushed his third big fly off the year -- his second as a Blue Wahoo -- with a two-out, two-run shot in the first inning. That was all the run support Randy Dobnak would need. The 24-year-old posted six innings of two-hit ball, walking one and striking out seven while lowering his ERA to 1.80. Gameday box score

Rangers 1B Andretty Cordero, Double-A Frisco: 2-for-5, 5 RBIs, 2 2B -- The 22-year-old more than doubled his total RBI output, plating five runs in Frisco's win over Midland. Cordero laced a two-run double and a bases-clearing three-run double in consecutive at-bats. It fell short of a season high for Cordero as he collected a seven-RBI night on April 9 against Corpus Christi. Gameday box score

Red Sox OF Jarren Duran, Class A Advanced Salem: 3-for-5, 2 R -- Duran, Boston's tenth-ranked prospect, collected a three-hit night for the second time in as many days, this time collecting three singles. Selected in the seventh round of the 2018 Draft, the 22-year-old Duran has not disappointed in his first full year of professional ball. His .395 average and 49 hits both lead the Carolina League and his .449 on base percentage comes second only to Rangers' Yonny Hernandez. Gameday box score

Rangers RHP Ronny Henriquez, Class A Hickory: 4 IP, 0 R, 2 H, 0 BB, 8 K -- Henriquez hurled the best start of the season, scattering two hits through four shutout innings. The Rangers' No. 30 prospect is only 18, but has flashed impressive stuff so far in the South Atlantic League. Henriquez holds a 3.21 ERA over 14 1/3 innings and has fanned 20 batters in four outings. Gameday box score