No. 33 overall prospect headed to Minors' top level at 21 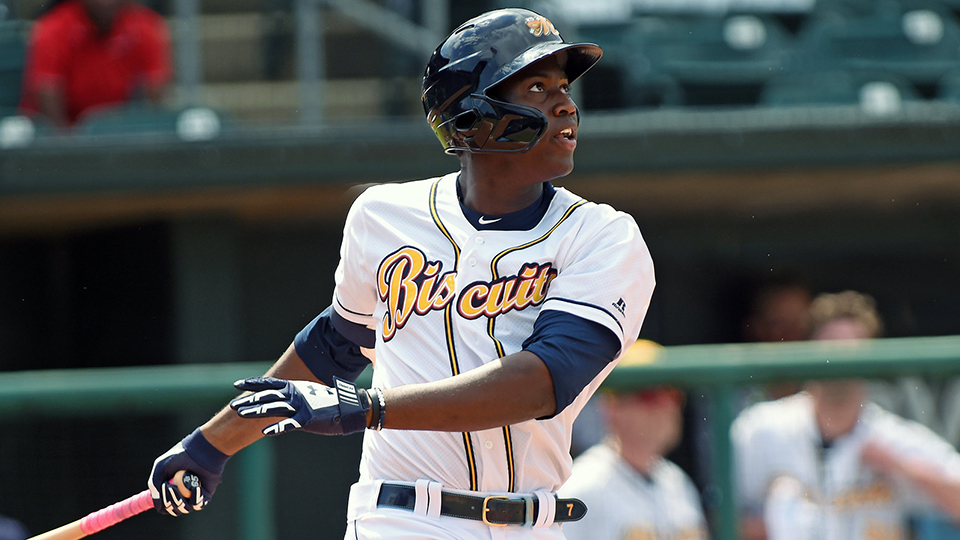 Jesus Sanchez hit nine home runs over 105 games during his time at Double-A, dating back to last season. (Brian McLeod/MiLB.com)

Another big-time Rays prospect is on the move.

Tampa Bay promoted No. 33 overall prospect Jesus Sanchez from Double-A Montgomery to Triple-A Durham, the club made official on Thursday.

The left-handed-hitting outfielder put together a .275/.332/.404 line with eight homers and five stolen bases over 78 games with the Biscuits. That level of production was good for a 115 wRC+ and earned Sanchez a Southern League All-Star spot last month. It also came after he played 27 games with the club last season, following an August promotion from Class A Advanced Charlotte.

Playing in his age-21 season, the Dominican Republic native heads to the International League for the first time, where he'll be the second-youngest position player behind Buffalo's Bo Bichette (also 21). One of eight Rays prospects ranked among MLB.com's Top 100, Sanchez is the fourth to receive a promotion this season alongside Wander Franco, Brendan McKay and Vidal Brujan.

Signed for $400,000 in July 2014, Sanchez has developed a reputation as a potential five-tool star in the outfield. With a career .301 average, his hit tool earns the highest grade while his power could be above-average as he matures into his 6-foot-3 frame. His arm is also considered above-average, and as a result, he's been used exclusively in right field this season, where he has six outfield assists.

Sanchez heads to a Durham squad that leads the IL South Division with a 53-37 record and is aiming to capture its third straight Governors' Cup. The young outfielder joins No. 12 Rays prospect Nick Solak and No. 14 Joe McCarthy on the Bulls roster. McKay is also technically with Durham right now but is expected to be brought back up by Tampa Bay for a doubleheader on Saturday.