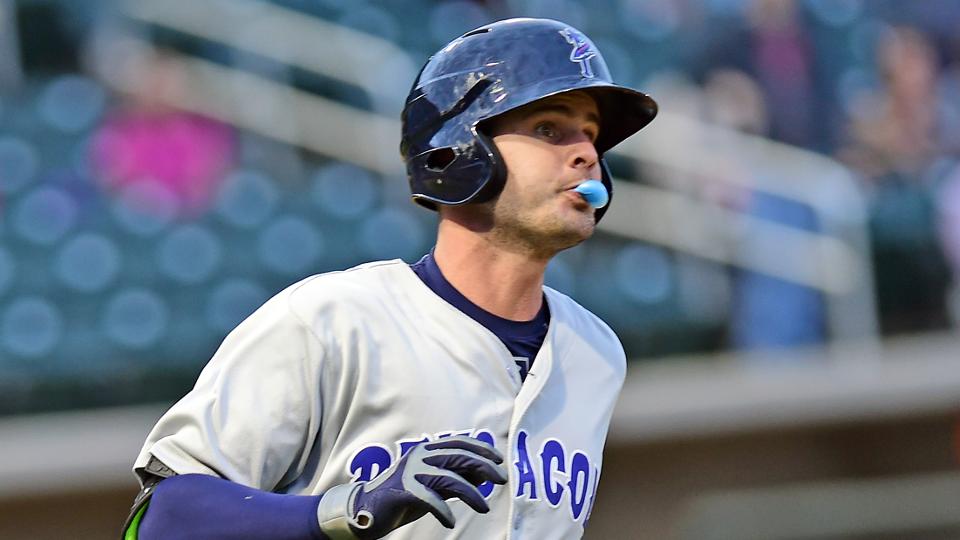 It's a credit to Winker's mental toughness and talents that he didn't let a rocky first half sink his 2015 season. After posting a .700 OPS and hitting just three homers in 60 games before the All-Star break, the 22-year-old smacked 10 long balls with a .941 OPS to go with it. That spectacular finish lifted his slash line to .282/.390/.433 and put him in position to push ahead to Triple-A Louisville in 2016.

"I think he really did a nice job of not panicking," Reds director of player development Jeff Graupe said. "He stuck with his approach, didn't worry about the results not being there and I think that led to his second half and will lead to future success for him."

Playing at a new level and eventually in a new organization after being traded from the Braves to the Dodgers, Peraza slowed down in 2015, stealing only 33 bases as opposed to 60 in 2014. Now with the Reds following a three-team trade in the offseason, Peraza brings his 70 speed and solid contact to an organization where he may not have to wait long for a chance to crack the big leagues. The Reds have utilized the 21-year-old speedster at second base and center field this spring.

"We're fortunate enough to see Billy Hamilton on an everyday basis," Graupe said. "I still think Billy is the fastest guy in baseball, but Peraza is right there. He keeps the ball in play, low strikeout rate, high line drives and uses his speed often -- it's really playable."

A first-round pick last year, Stephenson put up solid numbers at Billings in his pro debut, compiling a .712 OPS. The 19-year-old combines solid skills at the plate with a strong arm behind it. Considering how well he handled his professional debut at 18, there's reasons to be optimistic about the Georgia native being able to handle the transition to full-season leagues.

"I think Tyler has an advanced approach and is someone that we can push a little bit," Graupe said. "I can see him handling the work load and putting together quality at-bats and handing the pitching staff."

Back and healthy: Eric Jagielo, 3B

Acquired from the Yankees as part of the Aroldis Chapman trade, Jagielo missed extensive time last season with a knee injury that ended his season in June. Prior to that, the 23-year-old was off to a strong start, batting .284 with nine homers and 35 RBIs in 58 games. Look for the 2013 first-round pick to pick up where he left off, this time in all likelihood the Southern League.

"He is [healthy] and he's had a really nice spring," Graupe said. "I think he's improved defensively at third. It's something he wants to do and he put all the time and energy into it. He's a guy that puts together quality at-bats and has good raw power."

In an organization with Robert Stephenson, Cody Reed, Amir Garrett and Nick Travieso, among others, it can be easy to overlook Mahle. But in the time since he was taken in the seventh round of the 2013 Draft, the 21-year-old has posted a 2.84 ERA and last season led the organization with 13 wins.

"He's a guy that continues to perform," Graupe said. "He was a projectable righty out of high school whose fastball ticks up to 98. He's got advanced stuff to go with good command and advanced pitchability. I think he'll do well this year and may be be a quick mover."

More to keep an eye on: Scott Schebler has the power to potentially put up strong home run numbers. Whether that comes at Triple-A Louisville or Cincinnati remains to be seen.... Phil Ervin has shown the ability to hit and get on base in tough environments. Moving to the Southern League could prove a boost for his offensive numbers.... With an excellent fastball and a strong breaking pitch, Keury Mella should prove an excellent addition to the Reds organization as he embarks on his first full season in the organization.