Giants No. 30 prospect picks up MVP honors for homer, defense 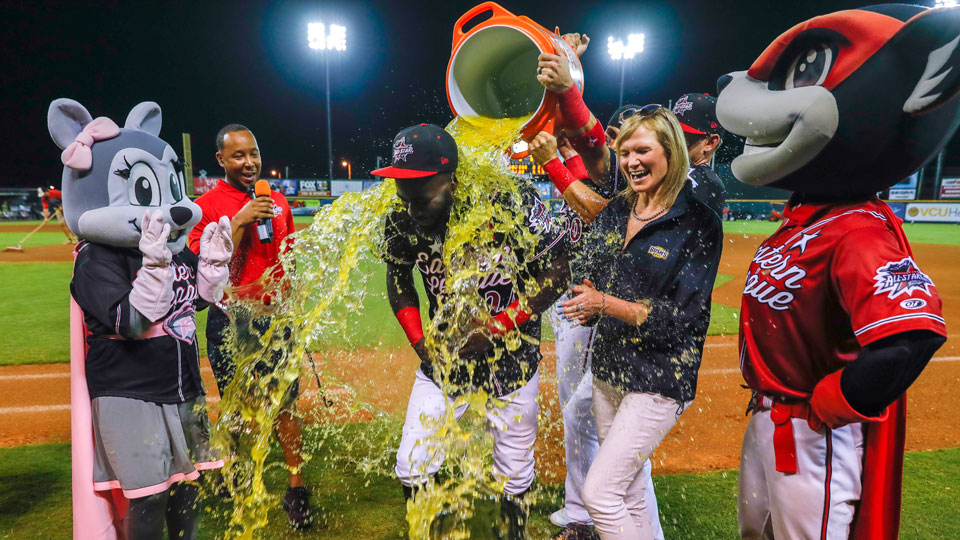 RICHMOND, Virginia -- There were plenty of hometown heroes for the sellout crowd of 9,560 fans to cheer at The Diamond on Wednesday for the Eastern League All-Star Game.

Richmond's Jacob Heyward, the left fielder for the Western Division, led off the last of the sixth inning with a long homer to left field off Portland southpaw Dedgar Jimenez to give the home team a commanding lead of 5-0 that stood up for the win. The West emerged victorious for the second straight year and the fifth time in seven contests before the largest crowd ever to attend an Eastern League All-Star Game.

Heyward scored twice and made some nice plays in the field en route to being named MVP. The Eastern Division was held to two hits despite the fact that the pitching staff was missing two top Erie prospects. San Francisco's No. 30 prospect went 1-for-4.

"I have no words for it," said Heyward, holding his MVP trophy before postgame fireworks began. "The fans here are always behind us. I was praying the homer would go over. We have so many great hitters on both sides."

The right-handed hitter is the younger brother of Jason Heyward of the Chicago Cubs. Jacob Heyward was playing in his first pro All-Star Game after spending the last several days of April on the injured list with a hip problem.

Does he expect a text of congratulations from the veteran Major League outfielder?

"One hundred percent. I hope so," said Heyward, who couldn't remember playing in a midsummer classic at any level, perhaps since Little League.

In the field Heyward made a nice catch on a liner to left field against the first batter of the game -- Jhon Nunez of the Sea Dogs.

"He dominated left field and he ran into one [for a homer]," said Bowie left-handed pitcher Alex Wells, Baltimore's No. 25 prospect and the second of 11 pitchers for the West.

Players from the two closest Major League franchises to Richmond also aided the win and there were fans in both Nationals and Orioles gear on a glorious evening in the Virginia capital. The winning manager was Richmond's Willie Harris, who played for both Baltimore and Washington.

Baysox infielder Mason McCoy, the Orioles' No. 30 prospect, led off the bottom of the first with a double and scored on a grounder by the Flying Squirrels' Jalen Miller, the 28th-ranked Giants prospect.

The hosts added two runs in the second. Wiseman doubled off the wall in center to score Nationals No. 19 prospect Tres Barrera. Wiseman crossed the plate on a single by the next batter, Erie's Jose Azocar (Detroit's No. 29 prospect) for a 3-0 advantage. Center fielder Braxton Lee of Binghamton got a late break, appearing to have trouble with the sun on the ball.

The Vanderbilt product belted nine homers in April, but has only two since then.

In the fourth, Heyward reached on a throwing error by Red Sox No. 2 prospect Bobby Dalbec and advanced to third on a pair of wild pitches by Trenton's Daniel Alvarez. Fourth-ranked Tigers prospect Isaac Paredes of the SeaWolves plated Heyward with a sacrifice fly to make it 4-0 in the fourth.

"To throw a shutout in this game says something," Wells said.

Second-ranked Rockies prospect Colton Welker came to the plate for the first time in the sixth and grounded out for the East. Welker, who has eight homers for Hartford, drew a walk in his only other at-bat.

Among the players selected to the event who did not participate were the top two prospects in the Tigers system -- Casey Mize and Matt Manning. Mize went to Class A Advanced Lakeland on Wednesday after he was placed on the seven-day IL on June 15 by Erie, retroactive to June 14. Manning allowed two runs on three hits in one-third of a frame Sunday in the Futures Game in Cleveland.

David Driver is a freelance writer from Maryland and can be reached at @DaytonVaDriver and davidsdriver.com. This story was not subject to the approval of the National Association of Professional Baseball Leagues or its clubs.