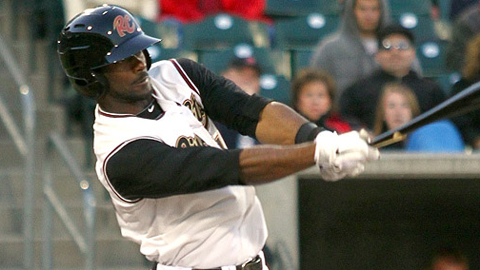 Jai Miller probably will not recall striking out on five pitches in his first at-bat Friday night. His final three plate appearances were a lot more memorable.

The A's farmhand launched a trio of solo homers over the final five innings of the Sacramento River Cats' 11-4 road win over the Las Vegas 51s.

"I was very upset with it," Miller said of his first-inning whiff, "but I'm glad I bounced back."

It was the fourth three-homer game in Sacramento history and first since Chris Carter accomplished the feat on Aug. 31, 2009.

Bringing new meaning to the phrase "hitting to all fields," Miller homered to center field in the fifth, left-center in the seventh and right-center in the ninth.

"I was especially happy with going to right, staying on the ball," the right-handed hitter said.

The former fourth-round Draft pick has five homers in seven games this month and a career-best 20 on the season.

"Doing that is great. It's my first time getting there," said Miller, who hit 19 homers for Triple-A Albuquerque in 2008. "My teammates are excited for me because I was able to do it in the first half. It's a great stepping stone, but I don't want to stay here."

The first two shots came off 51s starter Brad Mills (7-7), who gave up seven runs on 10 hits over seven innings.

Was Miller considering a potential third dinger when he stepped into the box against reliever Rommie Lewis?

"No, not all. I was trying to fight that as much as I could," he said.

Batting out of the two-hole as the River Cats' designated hitter, Miller also doubled in the fourth inning to go 4-for-5.

It was his second multi-homer game of the season. He went yard twice and drove in five runs against Reno on April 20.

The 26-year-old, who signed with Oakland as a Minor League free agent last November, also launched three longballs in a game while with Double-A Carolina on July 24, 2007. He drove in seven runs that day.

Miller is in his ninth Minor League season. He appeared in one big league game for Florida in 2008 and 55 more for the Royals last year.