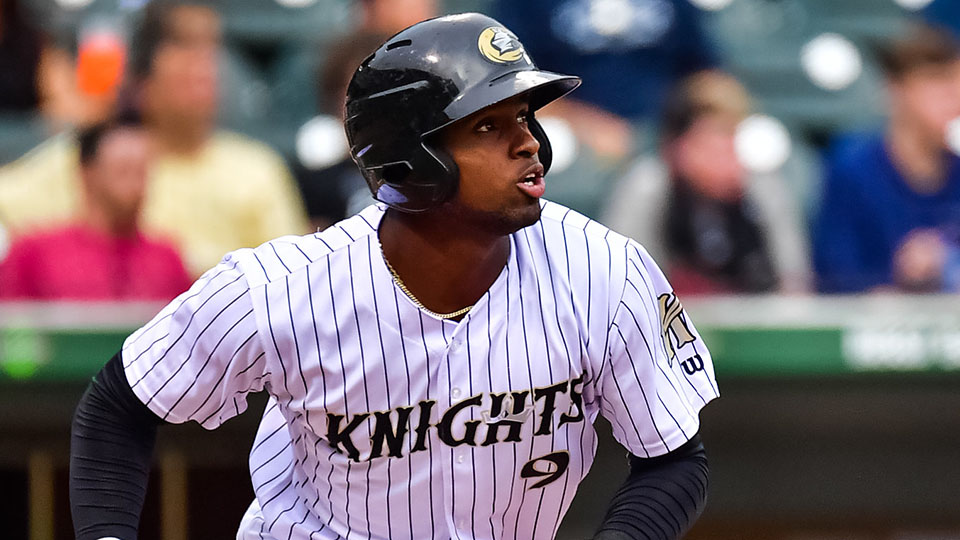 There's something brewing on the South Side of Chicago, with a core of young talent taking over Guaranteed Rate Field and turning the White Sox into contenders. Eloy Jimenez and Dylan Cease, both top prospects entering this season, made the jump to the big leagues and showed why they are thought of as two of the key members of the team's future.

They won't be alone.

Luis Robert, the 2017 signee who received a $26 million bonus, jumped 37 spots to No. 3 in MLB's Top 100 Prospects list during the season. He's followed by Andrew Vaughn, the third overall pick in the 2019 Draft, who moved quickly through the ranks in his first professional season and is 21st on the Top 100. Nick Madrigal (40th), the 2018 first-rounder, showed flashes of why he's the second baseman of the near future for the Sox.

Add Michael Kopech at No. 17 and the White Sox have four prospects among the top 40. The right-hander sat out this season after undergoing Tommy John surgery in March.

Yes, the future is bright for the White Sox and it won't be long before you see many of these guys in big league ballparks.

The White Sox claimed the native of the Dominican Republic off waivers in December 2017.

"We knew we were getting a bat, but to be honest with you, the defense was pretty good as well. He can throw and he has pretty good receiving abilities," director of player development Chris Getz told NBC Sports Chicago. "A guy that loves to play, plays with great passion and he has tools. He really took off in Birmingham this year. He was probably the most consistent hitter that they had. He can hit for [power], he can get hits the other way. He stays on pitches well. There's some ingredients for future success here. It was a bright spot in our farm system what Yermin was able to accomplish."

First baseman -- Gavin Sheets, Birmingham (126 games): A big target at first base and a big swinger at the plate, the 6-foot-4, 230-pound Sheets roped 16 dingers, 18 doubles and 83 RBIs while batting .267 in his first season at the Double-A level. In 110 games at first, the 2017 second-round pick out of Wake Forest -- and the 13th-ranked White Sox prospect -- committed only three errors and posted a .997 fielding percentage.

Second baseman -- Nick Madrigal, Winston-Salem (49 games), Birmingham (42 games), Charlotte (29 games): There aren't many players who move through the orginizational ranks faster than Madrigal has, reaching Triple-A in his second year after being drafted fourth overall in 2018 out of Oregon State. Combined, he raked for a .311/.377/.414 line with four homers, five triples, 27 doubles, 76 runs scored and 55 RBIs while drawing 44 walks. More impressively, the 22-year-old struck out only 16 times in 473 at-bats while swiping 35 bases. He also was stellar defensively, committing four errors in 488 total chances and earning a Minor League Gold Glove. Madrigal represented the White Sox at the Futures Game, getting the start at second base.

"It's definitely very exciting," Madrigal said of the potential to be a star in Chicago. "It's very realistic. We have a very dangerous lineup when you have that top of the order along with all of the other pieces we have in this organization. The White Sox fans have a lot to be excited for in the future, and I'm happy to be a part of it."

"Certainly bat-to-ball skills is one of his strengths," Getz told NBC Sports Chicago. "It is an elite skill that he has and in the game nowadays with the amount of strikeouts you see and how pitchers are attacking hitters, it makes him even more valuable. You look at his year, from [Class A Advanced] to Triple-A, to be honest with you, he continued to get better. He's a guy that once we got him a little bit closer, he got a little more excited and continued to perform."

Shortstop -- Zach Remillard, Winston-Salem (95 games), Birmingham (27 games): The 25-year-old appeared in 96 games at shortstop, 15 at third and four at first base, proving his versatility. During his time at shortstop, he put up a .950 fielding percentage, committing 21 errors in 419 total chances. At the plate, Remillard batted .277 with seven long balls, 18 doubles, 66 runs scored and 43 RBIs. He'll need to cut down on strikeouts -- he whiffed 125 times in 452 at-bats -- while drawing 46 walks. For his efforts with the Dash, Remillard was named to the Carolina League end-of-season All-Star team.

"You look back at the year, what our initial goal was and it's pretty impressive what he was able to accomplish," White Sox director of player development Chris Getz told NBC Sports Chicago. "We continued to challenge him with different levels and he continued to perform at an elite level."

Like Jimenez a year earlier, Robert did not get called up when rosters expanded in September.

"Sure, there are guys that are getting called up with lesser numbers," Getz said. "However, what's the best route for Luis Robert? We felt the best route was not to bring him up here."

Steele Walker, Kannapolis (20 games), Winston-Salem (100 games): The 2018 second-round pick didn't spend much time at Class A as he hit .365 in 20 games before getting called up to the Carolina League. There, he stayed productive, raking at a .269/.346/.426 clip with 10 homers, two triples, 26 doubles, 59 runs scored and 51 RBIs in 100 games. It didn't matter where the sixth-ranked White Sox prospect played in the outfield, he was perfect, posting a 1.000 fielding percentage on 223 total chances. Walker twice was named Carolina League Player of the Week (June 16, Aug. 4) and earned a spot on the end-of-season All-Star team.

Left-handed starter -- Avery Weems, AZL White Sox (four starts), Great Falls (10 starts): Picked in the sixth round of this year's draft out of the University of Arizona, Weems made quick work of the Rookie-level Arizona League, putting up a 0.69 ERA in four starts and striking out 14 over 13 innings while issuing only three walks. Promoted to Great Falls on July 7, the 22-year-old went 4-3 with a 2.47 ERA in 10 starts, holding opponents to a .235 average to earn midseason and end-of-season Pioneer League All-Star honors.

Right-handed starter -- Jorgan Cavanerio, Arkansas (seven games, one start), Winston-Salem (20 games, 19 starts): Released by the Mariners on May 7, the 25-year-old signed a Minor League contract with the South Siders three days later. Cavanerio rewarded their faith by going 9-3 with a 3.13 ERA and 73 strikeouts over 112 innings in 19 starts for the Dash.

"You look at the way the ball comes out of his hand -- it's live," Voyagers pitching coach John Ely said at the end of August. "He spins the ball extremely well. He has two distinct, Major League-style breaking balls: a curve and slider that play, at all levels.

"His best fastball is a two-seamer that we're trying to get more depth out of, but he throws the hell out of it."

Relief pitcher -- Will Kincanon, Winston-Salem (42 games): When the 2017 11th-round pick came into a game, opposing hitters didn't stand much of a chance. Over 58 innings, Kincanon allowed only 12 earned runs while striking out 71 and keeping foes to a .208 batting average. He compiled a 1.86 ERA and 1.22 WHIP and was one of six members of the Dash named Carolina League midseason All-Stars.