Meet Hall of Famer Rod Langway, the Red Rockets and Slapshot in Woodbridge 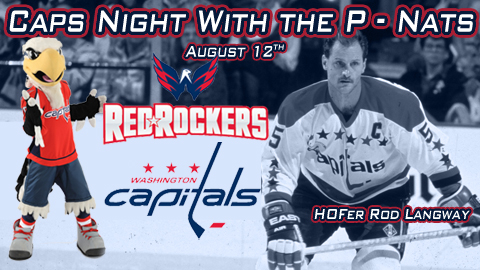 Capitals Legend Rod Langway will hold a meet and greet autograph session at the park on Capitals Day. Langway, known as the "Secretary of Defense", was a two-time winner of the Norris Trophy which is given to the NHL's top defensemen. He also finished second to Wayne Gretzky in 1982 for the Hart Trophy which is given to the MVP of the NHL. He won a Stanley Cup with Montreal in 1979. Langway was elected to the Hockey Hall of Fame in 2002.

The day will also feature the best cheer team in the NHL: the Red Rockers who will have a meet and greet with the fans. The Red Rockers are also set for a pre-game presentation on the field.

The Capitals mascot Slapshot will also be in attendance. He is set to assist during promotions during the afternoon game.

August 12th will also be a Sunday Family Funday with player autographs before the game, kids running the bases after the game as well as post game family catch in the outfield.

The Potomac Nationals are celebrating their 35th Anniversary of professional baseball and family fun, for all your ticket needs please call the box office at 703-590-2311 or visit www.potomacnationals.com. The next P-Nats home game is Thursday against the Winston-Salem Dash at 7:05 PM.