After injury, Lynch back on track in AFL 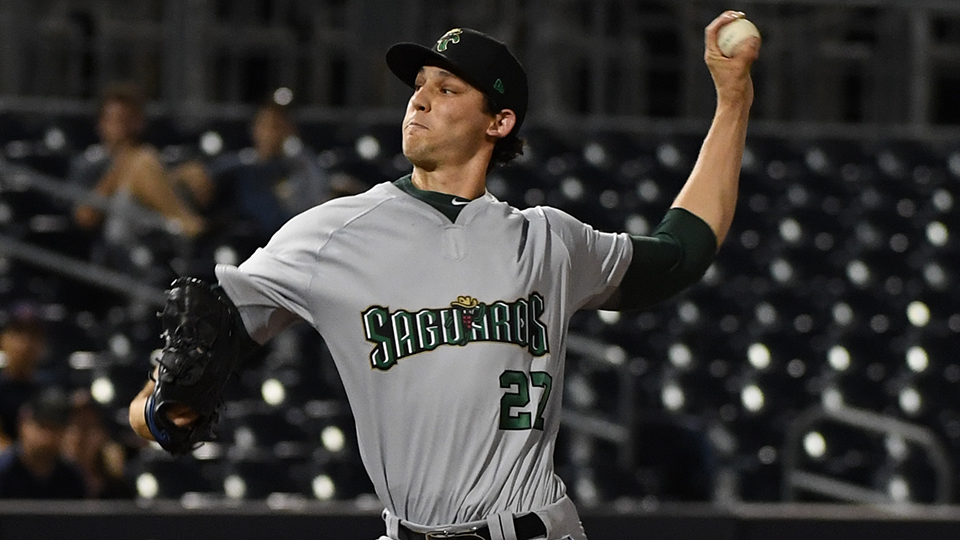 Daniel Lynch has compiled a 2.50 ERA with 157 strikeouts over 147 2/3 innings as a professional. (Jill Weisleder/Getty Images)

While he may be new to the Arizona Fall League, Daniel Lynch is no stranger to the Grand Canyon State. In fact, the third-ranked Royals prospect was there was only two months ago, working his way back to strength on a rehab assignment in the Rookie-level Arizona League.

A lot has changed for Lynch since that first stint in the desert: he's "absolutely" returned to 100 percent after missing nearly two months with a shoulder injury, he said, and he's no longer pitching in the intense summer climate of Surprise, where temperatures often soared into the triple digits. That, he also made clear, is something for which he's especially grateful.

Sunburn and sweat stains aside, the injury was more of a setback than anything for the young left-hander. In his 11th start of the year for Class A Advanced Wilmington, Lynch reported some discomfort in his arm during the second inning and exited as a precaution. It followed a stretch in which he delivered three straight scoreless outings, throwing 20 innings and 294 pitches in 11 days.

He wouldn't appear in another live game for seven weeks, relegated to watch from the sidelines before trekking to Arizona to begin a rehab regimen. But while he laments the time he lost from a developmental standpoint, what bothered Lynch most was the fact that he was separated from his Blue Rocks teammates. He could only watch from the dugout as Wilmington locked up a first-half division title in the Carolina League one week after he went down; before long, he was off to Arizona as his team was on its way to a 38-win second half.

"I missed my teammates," he said. "I didn't get to see them and they're out there getting to win and compete and I was sort of missing out."

Lynch started a throwing program within days of arriving in Arizona and returned to the rubber on July 20 with a two-inning outing in which he allowed one run and three hits. His final two appearances were flashier: he fanned five over three scoreless frames on July 24 before one-upping himself with a July 29 gem in which he struck out six over four hitless innings.

On Aug. 3, the Royals sent Lynch to Rookie Advanced Burlington. He arrived oozing momentum, but hit a speed bump when he was tagged for eight hits and four runs by Kingsport in his first start. He tossed five scoreless innings in his next outing against Danville and returned to Wilmington.

Lynch said his arm already was back at 100 percent for some time, but admitted it wasn't until he had a couple starts for the Blue Rocks under his belt that he felt truly at full strength.

"To be honest, I was still kind of getting back in the groove of things," he said. "It takes a little while when you're out of games to get back into the groove of sequencing and how you're going to throw guys and seeing batters. My body was feeling great, but mentally I still was working back in."

So it wasn't the elbow, the shoulder or the biceps that had the biggest effect on his return to form.

"I had a lot of time in Arizona to think," he said. "You do a little bit too much thinking and you sort of forget to just go out there and pitch."

Eventually, he found his stride. Lynch capped his season by dealing the first six innings of Wilmington's shutout victory over Lynchburg, then struck out 13 batters in two postseason starts as the Blue Rocks battled to their first Mills Cup championship this millennium.

The injury is more or less behind him, but it definitely made an impact. Lynch is much more mindful of his arm now, acting more consciously with how he treats his most important asset.

"It's just a learning experience ... learning to maybe you know take an extra day off or go light on the side," he said. "It's all part of the experience, but definitely frustrating."

Armed with that knowledge, Lynch is seeing tremendous results in the AFL as he aims to make up for missed innings. In two starts for the Surprise Saguaros, he fanned 12 over seven scoreless innings. He's not only delighted with his performance but with how he feels physically.

"I wasn't really used to pitching and waking up the next day and feeling good," he said. "I was just happy that I could sit up and go play catch and feel good."

Looking ahead, Lynch is definitely ready for the offseason and is excited to begin the year back on track in earnest in 2020. But for now, he's grateful for his time in Arizona, and is especially appreciative given how far he has come.

"I feel better than I have in a long time," he said.